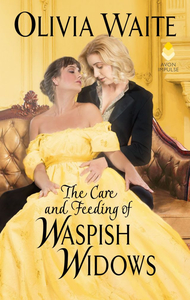 Agatha Griffin is a sharp business woman, running her printing shop after the death of her husband and trying to keep her radical son from getting himself arrested. Penelope Flood is a beekeeper with strong opinions and an unfortunate desire to please, who Agatha turns to when she discovers that bees have taken over her warehouse. Together, they care for bees, attempt political change, and mutually pine. As a sucker for mutual pining, this got me exactly where I lived – even though I had a horrified moment near the end of the book when I realised they didn’t know they were pining.

The pacing was a little off for me; there were dramatic points where it seemed like the characters were angry about a (missing, expensive) snuff-box or (missing, beloved) statues and about to investigate – and then the chapter would end and the subject was dropped for another few chapters. The time between was used very well, mostly for slowly building Agatha and Penelope’s relationship, or bringing in more of the political context, but it was jarring to go from justified fury to peaceful scenes with bees and printing. I had a similar problem with the historical explanations and scene-setting; it was useful, but sometimes hard to tell which character was narrating or where it fit into the story because it was functionally a recitation of facts.

It was very satisfying once the story got into the voices of the characters and their political activism; reading Agatha’s hope that things might change, in 2020 of all years, was emotional and relatable! The story centres people with no right to vote at that time (women and men who don’t own property), so the character’s ability to directly influence proceedings was minimal, but the activism, organisation, and use of public sentiment felt realistic to what’s going on now.

Marriage and divorce are one of the anchors of this book; it explores the hazards of marriage for women through different relationships. George IV trying to discredit and divorce his wife is rooting the story in time; there are subplots about abusive husbands, the social pressure on Penelope to behave in a way that reflected well on her husband, the sheer luck involved in Agatha having a husband that respected her, the pressure Agatha feels to have her son get married despite her own reservations about marriage as an institution, a widow with no legal rights after her female lover dies… All of these secondary and tertiary relationships are well presented and developed, and all of them circle back to this theme.

One of my favourite things about the Feminine Pursuits series is that it explicitly argues that marriage isn’t the only avenue for formalising relationships. Characters who want ways to legally bind themselves to each other when there aren’t any publicly acceptable avenues find them or make them, which is so validating to read! There are so many people in this book who are making different choices about how they want to live and be known – and the book doesn’t shy away from how those choices are made easier by wealth and privilege. It’s genuinely heart-warming to see all of the ways characters commit to and choose each other! I’d also like to point out that these decisions aren’t only between queer couples – there are couples who do have the option of legitimacy and respectability through marriage, who choose individual freedoms instead. It means a lot, especially when as recently as 2019, RITA award panels were rejecting queer historicals as “not romances” because the characters couldn’t get married at the end.

There are some cameos and references to The Lady’s Guide to Celestial Mechanics but for the most part The Care and Feeding of Waspish Widows does stand on its own. There is one scene involving Catherine from the previous book that might not be clear if you don’t know who she is or what her relationship to Agatha’s shop is, but for the most part it works! (Plus, as a book nerd: the details of how the printing shop works are great and I love them.)

But the best part of the book is how funny it is! There were several points where I had to put it down and cackle – Agatha solidly roasting the concept of gal pals in a book set in the 1820s was such a brilliant moment! And Agatha and Penelope consistently going “Oh no” about how much they adore each other was delicious.

The Care and Feeding of Waspish Widows brings through all of the beauty and political commentary that I loved in The Lady’s Guide to Celestial Mechanics, while focusing it in a different direction. I absolutely recommend it.