Fun fact: the first Cassandra Khaw book I read was a paranormal romance called Bearly a Lady, about a bisexual werebear fatshionista. I really enjoyed it! But I found out later that this is very much not Khaw’s usual genre.  They usually write horror and sci fi, and pretty brutal horror and sci fi at that. Although those aren’t my usual genres, I decided to take a chance on this one.

The All-Consuming World is a little bit heist novel, a little bit noir narration, a hint of Lovecraftian, and a whole lot of gritty sci fi. Maya is a rabid dog of a mercenary clone who is ready to fist fight with god. She is entirely, illogically, wholeheartedly devoted to Rita, a mad scientist type. Rita is cold, withholds affection, and is always pulling the strings in an elaborate scheme. She’s manipulative, even cruel, and always five steps ahead of anyone else.

They both used to be part of the dirty dozen (at least, that was the most polite name for them), a group of criminal women. It’s been 40 years, though, since a job went bad and left two of them dead — permanently. Maya is used to waking up in a vat of goo, newly regenerated from her most recent grisly demise, but there are some deaths you can’t come back from. Now, they’ve got to try to get the band back together for one last job.

The universe is ruled by AIs, and Maya and her fellow clones are the last dregs of what passes for humanity. Rita says that the AIs are ready to wipe the last of them out and start fresh — but who knows if you can trust anything she says.

This is a fairly short book at 275 pages, but it packs a ton in. The narration style is distinct. Maya’s POV chapters — which are most of them — use the word fuck about once a paragraph. Throughout the book, Khaw uses really distinct metaphors and similes — sort of like a noir detective story, but with a bloodthirsty futuristic perspective. For example, “the sound unspooled between neurons like a tendon snagged on the tooth of a Great White.”

Also, either keep a dictionary on hand or just bask in Khaw’s superior vocabulary. I kept rediscovering words I haven’t encountered in years, and then bumping into a good chunk I’ve never seen before.

This is definitely a story that throws you right into the world, trusting you’ll pick it up as you go. There are factions of AIs, each with their own values. AI Minds interconnect in a grand conversation. AI have elaborate rules for communication, sampling lines and voices from all of recorded human history: a laugh from Audrey Hepburn, a line from Leonard Cohen. Ageships are sentient ships of unfathomable size and power, capable of swallowing stars.

It’s also got some… unique visuals. Needless to say, the Butcher of Eight’s appearance is just as intimidating as the name. Also, we get a lot of detail of being awake during eyeball surgery, so definite content warnings for gore.

Most of the book is spent in the “getting the band back together” plot, which is good, because it lets us get slowly introduced to a big cast. They are all queer women and non-binary people, with very different personalities. There’s an ethereal, worshipped pop star that literally glows and has multiple mouths trailing down her neck, and a disembodied woman in code corrupting the conversation from within — just to name a few.

But the relationship between Maya and Rita is at the core of the story: Maya can’t seem to control her loyalty to her, even when Rita hurts her and everyone else in her life. It’s also just fun to be in Maya’s head, because she is so out of control: the only time she feels comfortable is when she’s in a deadly fight.

It’s a story about the defiance and audacity of humans, of never knowing when to give up.

This isn’t one every reader is going to love, because it is very gritty and sometimes stomach-turning, but I really enjoyed it, despite it not being a genre I usually gravitate towards. If you can handle nonstop profanity and gore with your existential heist stories, definitely give this a try. 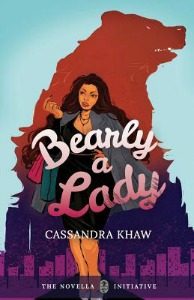 Bearly a Lady by Cassandra Khaw is the romantic (mis)adventures of Zelda McCartney, a fat bisexual fashionista woman of colour who works for Vogue’s London office… Who also happens to be a werebear with a vampire flatmate, a date with the hot werewolf next door, a fae prince to babysit, and a crush on her coworker, Janine, that she is desperately trying to ignore.

She’s got a busy week, okay.

I was expecting something like The Devil Wears Prada with werebears, which isn’t quite right (there is a lot of fashion, but not as much about running a magazine as I dreamed, woe), but Bearly A Lady is absolutely funny and witty, with Zelda creating as many problems for herself as she finds foisted upon her.

I think that the only real problem I had with it was that I never understood what the problem was with Janine – all of the potential love interests I liked her best, but I never quite understood what had happened to make this relationship unviable in Zelda’s mind? The closest we get is “Oh, I didn’t realise you were seeing someone,” which is apparently resolved by the time Bearly a Lady starts. Plus the book spends much more time dwelling on the two male love interests than it does on Janine, I guess because Janine is established as lovely and having a friendship in her own right with Zelda from the outset and the other two love interests are… Well, they sure are people that I could believe I’ve met and loathed.

(A thing I did appreciate is that Zelda’s sexual feelings for Janine are presented in the same way as her feelings for Benedict and Jake; I have read a surprising about of fiction with bisexual women in that treats attraction for women as a pure, chaste thing even when the attraction for men is written as sexual.)

The secondary characters are really well-drawn and Zelda’s relationships with them are different and great. In particular, the friendship between Zelda and her roommate, Zora, felt believable and fun; they bicker and bring out the best and worst in each other as best friends do. And the world building squeezed into the space of this novella is interesting – especially things like the enmity between vampires and fae, and the restrictions for shapeshifters.

The story is quite short – it’s novella length – and moves along very quickly, so if you’re looking for something fun to pass the time and you’re in the mood for supernatural romantic drama, Bearly A Lady is for you! 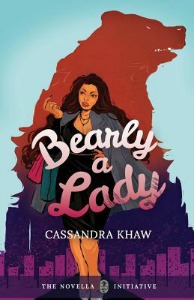 Werebear Zelda is lusting after hunky werewolf Jake–while simultaneously nursing a longstanding crush on her gorgeous coworker Janine. (Yes, werebear–as in, Zelda turns into a bear once a month.) And on top of everything, she’s been tasked by her boss with guarding Benedict, an insufferable member of the Fae. All of which combined leads to quite the whirlwind few days for Zelda.

Bearly a Lady is a cute, breezy novella, with chatty first-person narration and a refreshing way of portraying the supernatural–the author describes it as a “paranormal rom-com,” which certainly rings true. Zelda is an enjoyable character–her running commentary is endearing. And the supernatural chick lit angle is a lot of fun: the novella isn’t overly dramatic or self-important about the Fae in a way that feels welcome, and lets the cheerful romance go hand in hand with this casual conception of the paranormal. Plus I just love the idea of there being all kinds of were-animals running around.

As a novella, it’s quick read – I definitely felt like I would enjoy reading more of this story, and in fact there were moments where things felt a little convoluted and lacking in detail or connections, likely because of the novella format. I would have loved to see things a little more fleshed out – more details about the Fae and descriptions of the characters (especially Benedict, who is a bit of a flat antagonist), some more of Zelda’s backstory with both Jake and Janine than the little that is alluded to…

Bearly a Lady is a fun, lively supernatural romance–the little snags in the story are outweighed by the enjoyable world that Khaw has built, and the feel-good romantic ending (spoiler alert: she gets the girl!). Give it a try–supernatural chick lit is the genre you didn’t even know you needed.