It’s Halloween, and I know exactly which book you should read cover to cover today.

Joey is meeting her boyfriend’s family, and it’s understandably stressful. They’re wealthy; she’s not. He’s worried about trying to stay sober back there. She wants to impress them. But she’s on her way to becoming a lawyer, so she’ll be joining the elites soon. She’s up to the challenge of learning how to blend in.

It goes about as well as you’d expect at first. Joey feels judged and out of place. She becomes friends with the family’s nanny, Petal, even as Petal advises her that being seen with the help will not be good for her standing in this society. As she explains this to Joey, the baby picks up what appears to be a human jawbone on the beach and begins playing with it…

This is a short graphic novel, so I don’t want to spoil anything, but I think you can probably guess that this rich community is eating people; it’s revealed pretty quickly. The twist (mid-story spoiler) is that it’s not a secret. It’s in their contracts. You retire, and you get hunted for sport and eaten. But in the meantime, you get paid well, you get good health benefits, etc. For some people, it’s the best option on the table. That’s capitalism for you. (end of spoilers)

This an over-the-top, gruesome, funny, anti-capitalism, queer graphic novel that I enjoyed from beginning to end. In just a few pages, I completely fell for Petal, who wears a “Loud and Queer” t-shirt and assures Joey that yes, she knows how awesome she is. I think I can safely say that if you like the title and cover, you’ll love this book, and it’s such a fun one-sitting Halloween read.

Ever since I read J.J. Arias’s Guava Flavored Lies, I’ve wanted to go to Miami so bad, just to hit up a Cuban bakery or three for a pastelito de guayaba and a cafecito. It’s been a while since I’ve read a book by Arias, and, as with a lot of prolific authors lately, this recent work is a departure from her normal MO (in this case, exemplified by Vampires and the Goode series).

From two households alike in dignity, Sylvie Campos and Lauren Machado are business rivals and lifelong enemies thanks to a decades long feud between their families. But the conflict for our main characters may be more complex than it seems on the surface – details about Sylvie and Lauren’s past will be revealed along the way that give us a bit more insight into why the anger between the two seems so very… extra.

The story is largely centered around the feuding between the Campos and Machado families, who both own popular Cuban bakeries in Miami, and who each accuse the other of having allegedly stolen family recipes when the founding families parted ways. Opening with a flashback to Lauren and Sylvia’s schooldays, we get a glimpse of how the families’ long time squabbles have affected their kids, who are literally at each other’s throats, though it’s tempered with a hefty dose of humor.

Lauren and Sylvie end up thrown together in the foodie version of the only one bed trope; that is, one food festival and only one functional espresso machine. Aside from their day to day struggles while being stuck side by side at a high profile event, and all the verbal sparring that comes along with it – Sylvie is still determined to try to solve the mystery of the family feud and to prove once that Lauren’s family are recipe thieves.

By the end of the book you’ll have some intense cravings for croquetas and a strong cafe con leche. But the food is also a vehicle for themes of old vs new, as the younger generations of both rival bakeries are being groomed to take over. Lauren wants to modernize some aspects of her family’s business, trying out vegan recipes and experimenting with (much to Sylvie’s dismay) oat milk in her Cuban lattes. Sylvie just wants to perfect the classics and build on her family legacy. Food is the love language of both our MCs, and rather than being at odds, their styles are complimentary, though it takes some translation to realize it.

A satisfying enemies-to-lovers romance, Arias gives us an example of the amazing quality of writing coming from self published authors and small presses these days. Solid, witty prose and dialogue, and pacing and intrigue to move the story along. I hope this is a book that finds its way into a lot of e-readers! And as a long time independent publisher of Sapphic romance, Arias has a backlog of works in the event you fall for her recent bakery wars romantic comedy.

Ever since I discovered Tamsyn Muir’s Gideon the Ninth, I have hesitated to read it for the sheer fact that it could only be a book that I loved or that I hated.  It looked so tailored to my own personal tastes that if it did not deliver, it would have actively made me kind of angry about the wasted potential.  But fortunately, this book was everything I hoped it would be and more.  Funny and brutal, it was absolutely wild from start to finish, but in the best possible way.  I laughed and I gasped and were I capable of expressing normal human emotions, I probably would have cried.

To start off, the review on the cover describes it as “lesbian necromancers explore a haunted gothic palace in space,” and I mean, what’s not to love about that?  More specifically, it centers on Gideon Nav, a skilled swordswoman and ward of the Ninth House who has already tried to escape numerous times.  After yet another foiled attempt, she agrees to pose as a cavalier to Harrowhark Nonagesimus — the heir to the Ninth House and a necromancer who has made Gideon’s life hell since childhood — in order to help Harrow survive a trial that could end with her ascension to immortality serving the Emperor.

Between the necromancers and the cavaliers, this book does have a fair few characters to keep track of, but they are so distinct that it does not take long to learn who is who.  And though they are many, I loved every single character in this book — as a character if not necessarily as a person.  The morals are, after all, somewhat questionable at times.  In particular, I have never understood the appeal of the damaged-asshole-hot-guy trope, but I have officially been won over by damaged-asshole-hot-girl Harrow (and, in all honesty, every other woman in this book).

On that note, Gideon Nav is one of my favorite protagonists I have ever had the pleasure to read about.  Her narration is amazing, and her dialogue is hilarious (I think I could have read this book in half the time if I didn’t stop every five lines to read aloud every funny thing Gideon said or thought), but she’s also so much more than that.  She surprised me constantly, though I always felt like I understood why she did what she did.  Chaotic as she is, there is such specificity to her that she felt like a real person from the very first page.

Really, that is true in just about every aspect of this book.  I have heard that this book is confusing, and while I will admit that I don’t think I ever quite grasped all of the fundamentals of necromancy, I also don’t think that was to the book’s detriment. Because we receive this book through Gideon’s perspective and because she understands necromancy in this world about as well as we do, I was able to follow along easily and trust that if she did not understand, I did not need to either.  Anything I did need to know would be revealed eventually, but whatever questions I was left with, the author did have an answer.

The thing about this book is it’s so out-there that it very easily could have been a mess, weird for the sake of being weird, but everything about it is so specific that it always felt completely intentional.  Even at its most wild, everything fit together perfectly in a way I can’t quite describe.  I would trust Tamsyn Muir with my life (or at least my next read!). 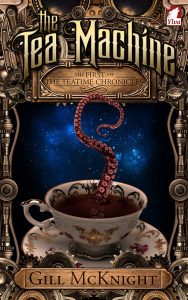