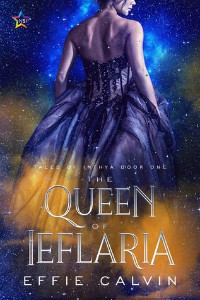 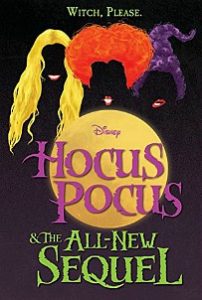 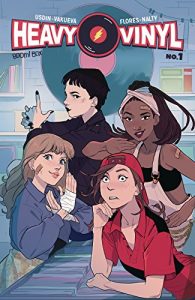 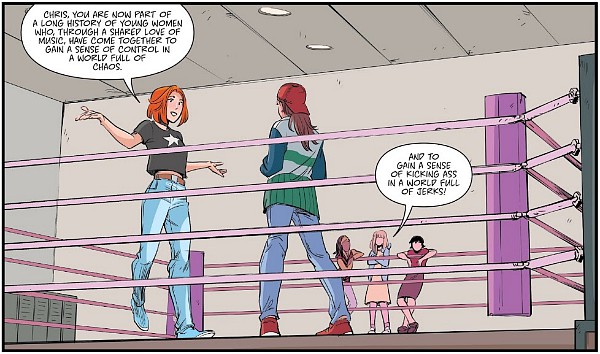 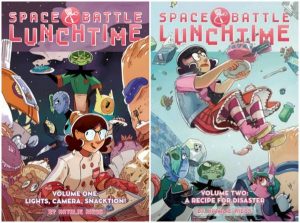 Space Battle Lunchtime is a two-volume graphic novel by Natalie Reiss, about Peony, a baker who accidentally ends up being an emergency replacement for a cooking show… In space?! Cue sabotage, drama, rival shows with distinctly more cannibalism, and trying to work space ovens.

This is super charming and funny. Peony is both competent and confident in her baking skills, and I loved getting to see her do well even though she was in completely unfamiliar territory. I was so invested in her doing well, which meant that the first couple of issues where she was floundering while surrounded people who just assumed she knew what was going on were very frustrating for me. I know, I know, it’s a trope, but it’s a trope that I hate. But “winning over the cast and crew so they help you” is also a trope and I was so happy to see it here, especially because of the way that the relationships build. Peony is so nice and so confident and just wants to beat everyone fair and square, yay! The way that her relationship with Neptunia comes together works perfectly with that – there’s awkwardness and rivalry and Peony putting her foot down to make sure they can work together, but also sweetness and daring rescues and both of them being supportive of each other and each other’s feelings!

The art is really, really cute and bright and colourful, and the designs of all of the aliens are distinctive and interesting. I especially love the way the Natalie Reiss contrasts appearances and personalities (such as the cute magical girl fox, who is sure a character), and the way that it introduces background details that further the plot and the world building, I thought that was really clever and well-handled. (… I’m sure it’s fine that Cannibal Coliseum, the rival cooking show where contestants literally cook and eat each other, keeps showing up in the background. That’s probably not relevant.)

But of course, what is a cooking comic if there isn’t rampant sabotage, and the ways that the sabotage is revealed is really cool. The reactions especially are great and fun, and the way that Peony and Neptunia deal with the end of the story is great. It was cool and believable and I enjoyed it. … Although I got to the epilogue stories and was suddenly REALLY CONCERNED for the side characters! My only real complaint is that the first volume ends on a massive cliffhanger, so it is worth getting both volumes together if you’re going to get them!

I really genuinely enjoyed this. It’s cute, it’s funny, and seeing Peony rising to her challenges is great. If you like cooking shows, bright and happy graphic novels, and/or ridiculous space drama, this is absolutely your thing. 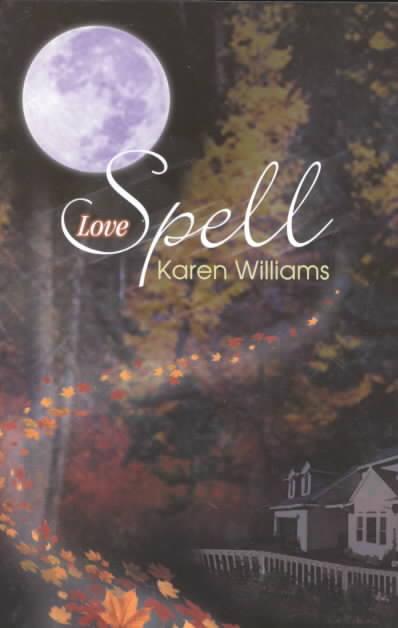