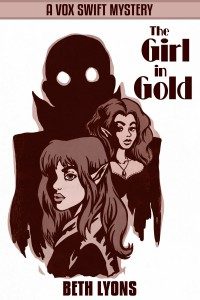 I recently received a couple of review copies of books in which the private investigator protagonist has paranormal powers. The first, Geonn Canon’s Underdogs, has its shape-shifting PI use her powers to do surveillance for a client in the first few pages. Perhaps I should have read on, but using paranormal powers to solve a case—or any part of a case—is verboten as far as lesbian mysteries go. The mystery genre should be a cerebral one—one in which, ideally, the reader can empathize with the detective, weighing clues and solving the mystery concurrently with the detective. Because readers are not canidae, it is difficult to empathize in Canon’s book. In other words, a dog can watch a house without arousing suspicion; a human cannot. So for me, the book became primarily paranormal.

So it was with some foreboding that I began The Girl in Gold, in which 23-year-old part-time P.I. Vox Swift is an elf.

Vox seems to be one of two employees of Boleian Investigations, the other being Boleian himself. She also works as a messenger for a family business called Swift Messengers, which was fortunate, because during one of her deliveries, she becomes aware of a murder. Seems that the victim—dressed loudly in gold—has just been discovered in the library of a famous author. Then, the same day, another girl about the same age and size—her face unrecognizable—is also discovered.

Vox is studying to be the type of magician called a Bard, which is one who sings songs as she investigates, asking the universe as it were, to help in her discoveries. The first time she uses this magic, she is simply trying to ascertain if magic was used in the murder. To me, this was okay—the magics were canceling each other out because, in fact, there was no magic used in the crime. But when Vox questions a maid in the house where the murder was discovered, she uses a charm that causes the girl to spill everything she knows. This was a no-no. It’s not something a human detective could do. So the book can not be truly considered a lesbian mystery. Rather, it is a lesbian fantasy. But I had already read five chapters so I went on. Later, she casts a spell to find a secret door where she can eavesdrop on an important conversation. Shake my head.

The idea of a town that had humans, fae, elves, and dwarves living in relative harmony was a good and interesting one. Vox herself has promise, and her budding relationship with the human paladin Jesskah Morningstar was tantalizing.

Still, in rating the book just for myself and for whoever reads this, just about everything about it gets a 3: the mystery (which everyone solves before Vox dose), the writing style, the relationships, the emotions, and even the universe are all above average, but just barely. It isn’t something I can’t recommend, but neither am I going to warn you away any more than I have. Those readers who specialize in reading lesbian mysteries are going to like it less than those who prefer fantasy.

Note: I read a review copy of this book kindly provided in ebook form by the publisher through Lesbrary.