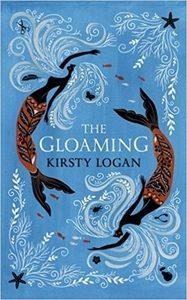 The Gloaming begins with jellyfish washing up near a cliff by the sea, on an island where the residents die slow deaths by turning to stone. It’s a sad, strange and beautiful scene, just one of many sprinkled throughout this novel.

Our protagonist is Mara, who falls in love with Pearl, who is a selkie or a mermaid or perhaps neither? Myth and metaphor wind around one another, the author weaving multiple fairytales together to create one of her own. Nothing is quite as it seems in this book. All of this is set against the backdrop of an island with “dark, tarry magic” and the tragic loss of the protagonist’s little brother who was swept out to sea. The novel follows Mara and her family as they try to move through their grief, living their lives amidst the push and pull of the island.

It’s up to the reader to decide, in many places, how much of the island’s magic is real and how much is not. In that sense, The Gloaming is an excellent example of magical realism.

It’s also a beautifully written book. The island is painted so vividly it’s not hard to see how Mara and her family are drawn to it. Sentences flow like poetry – or dare I say, like water – with such careful, well-chosen language it’s easy to get swept up in it.

The novel asks big questions about grief and love and family, and answers them by waving its arms in wide, sweeping arcs. True to its title, The Gloaming is shadowy and mysterious and leaves much unsaid. Instead it asks its readers to read between the lines – there are leaps in time, flashes backwards and forwards, conversations we aren’t fully privy to. The plot meanders through at a leisurely pace, with all of the focus being on simply exploring the characters the story presents to us.

That lack of clarity might be frustrating for some, but it fits with the central themes of the novel rather well. The overwhelming confusion of loss; the sharp pain of hope; half-forgotten stories of childhood; a yearning to be somewhere else but not being quite sure where that somewhere else is. Mara’s queerness melds naturally into these themes, but we skirt around the edges of the harder truths of coming out in a small community. The reluctance to be affectionate with Pearl in front of her family is just barely addressed, for example, and we rarely see the world or anyone in it outside of the main characters.

That said, Mara and Pearl’s relationship is only a fraction of the novel. It’s not a romance, so much as a fantasy that threads romance throughout it. Each member of Mara’s family is fleshed-out and we get to peek inside all of their heads, with every familial relationship explored. Signe and Peter, the parents, are delightful to read about. We spend a lot of time with Mara, who, like the “changeling” motif she is associated with, is seen so differently by so many. She’s brave, sensitive, sad, loving, angry and self-conscious all at once. Ultimately, she’s a fascinating protagonist.

Motifs are everywhere: water, stone, time, death, wind, air. It’s very much a modern-day fairytale that pays homage to the centuries of fairytales that preceded it.

If you’re looking for a story that’s purely about romance, The Gloaming might not be for you. However, if you want to read a haunting fantasy that happens to have a queer romance, this is a great book to dive into. 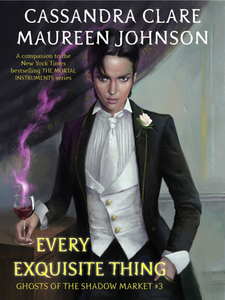 This story is part of a collection called Ghosts of the Shadow Market, another installment that takes place in Clare’s Shadowhunter universe. For those unfamiliar with this world, the short version is this: A race of people with angel blood running through their veins, known as children of the Nephilim, keep demons at bay working as Shadowhunters. They are raised in this way of life, and their purpose is to protect the mundane world from getting taken over by evil.

Okay, now that you have a little background, let’s dive into the story proper. Warning, there be spoilers ahead!

It’s 1901 in London, and Anna Lightwood is learning how to be a Shadowhunter, along with her brother and cousins. When she’s training, she gets to wear comfortable, sensible clothing that allows her the movement a warrior needs to properly fight off demons. It’s when she’s made to wear ladies’ clothing among civilized company that she feels misplaced.

Anna spends many hours stealing her brother’s old clothes, dressing up as a dapper young woman, and pretending to dazzle the ladies in the privacy of her room, where no one knows her secret. When I say dapper, I mean, seriously, just look at that book cover!

Then one fateful day, the Inquisitor (a high-standing political position in the Shadowhunter world) visits with his daughter, Ariadne. Anna is immediately smitten, and so it seems is Ariadne. Now when Anna pretends to dance with an imaginary young lady in her room, she takes on the image of Ariadne.

Anna is more than enthusiastic and happy when Ariadne suggests they begin training together. Still, with the thrill of growing so close to her new crush, Anna worries about her family’s and society’s reaction to her true feelings: that she will never want to marry a man.

It’s never explicitly stated how Anna identifies in terms of gender. She doesn’t object to being called she, but in her imaginary dancing with Ariadne, the fantasy version of the girls tells Anna she is “the most handsome person I have ever known.” In Anna’s own make believe world, the girl she has a crush on doesn’t identify her by any specific gendered term. Readers could interpret Anna as nonbinary or genderqueer.

One night, her cousin, Matthew Fairchild, invites Anna to a night on the town, as he seeks the company of a fellow mischief maker. Anna is all too happy to don the stolen suit she sewed up to fit her and take it for a spin to a notorious club in Soho.

Never once does Matthew object to his cousin wearing men’s clothes. In fact, he even offers her one of his own ascots, as he states, “I could never let a lady go out in inferior menswear.” The acceptance of one of her peers gives Anna a confidence she’s always longed for.

During their escapades, Anna and Matthew stumble upon trouble in the form of a warlock woman named Leopolda Stain. They don’t quite know just how much trouble she is until Anna invites Ariadne out to the same club a week later, when events take a turn for the worse.

Once more in the menswear that makes her feel confident and comfortable, Anna introduces Ariadne to the London nightlife of poets, writers, and artists that her cousin had shown her. The two young ladies’ flirting gets cut short when the warlock Leopolda is found leading a demon summoning.

Anna and Ariadne are first and foremost Nephilim, so they do what they do best. They jump into action to put a stop to the danger and rescue the mundanes in the club. In the midst of their battle, Anna realizes how in love she is with Ariadne. That’s when she sustains a terrible wound and Ariadne must come to her rescue.

It’s an absolute treat getting to see two bad babes fight back to back and then take care of each other. Back in Ariadne’s bedroom, where she took Anna to recover, the girls finally have their moment of truth and share a sweet and passionate kiss that turns into an adorable scene of cuddling.

Anna leaves back home, her family none the wiser to the night’s escapades. The way Johnson and Clare describe Anna’s joy at finding someone who reciprocates her feelings is absolutely genuine. It’s that sweet and warm, fuzzy feeling of a first love that every reader of YA can appreciate. But that sweetness is short-lived, as the next day Anna returns to Ariadne’s house to find her parents have arranged a marriage for her to another: Matthew’s brother Charles.

Anna begs Ariadne to buck with tradition and societal expectations, and to be with her instead. Ariadne though feels her only choice is to marry a man she will never love, so as not to cause any ripples or bring dishonor to her family.

Though Ariadne will not see Charles again for another year and tells Anna they can share their secret happiness for that time, Anna turns away, knowing that she no longer wants to keep hiding behind the mask that society has chosen for her.

The end of the story is really what made me tear up. Upon learning the truth of Anna and Ariadne, Anna’s mother Cecily shows nothing but support and acceptance for her daughter. Cecily, it turns out, has always known that Anna had no interest in men, but she never wanted to push her daughter to speak before she was ready.

When Anna laments that she will never be allowed to marry another woman, Cecily reminds her that many marriages in their family were said to be forbidden, but that they found ways, despite what society and Shadowhunter laws expected.

Anna’s mother further shows her support in presenting Anna with a new suit designed specifically for her. She knew all along that Anna had been stealing her brother’s old suit, and decided she needed a proper men’s suit of her own. Taking courage and strength from her mother’s support, Anna takes a knife to her hair and cuts it down to a masculine style.

When she joins her family at a picnic in her new attire and hairstyle, her father, Gabriel Lightwood (a familiar face to fans of The Infernal Devices series), hints that the blue waistcoat was his idea. To the haircut, her mother simply remarks it is more sensible for battle. Her brother merely smiles his acceptance of her.

Though Anna is still heartbroken over Ariadne, she is finally free of the invisible restraints of society now that she knows she has her family’s unconditional love and acceptance. It’s this ending that makes the story of a broken heart so worthwhile. While the two female leads didn’t get to live happily ever after, Anna got something more: a newfound sense of self that won’t be shaken.

For those that only want to read this story or don’t have access to the full collection, it is available as its own ebook through Amazon.