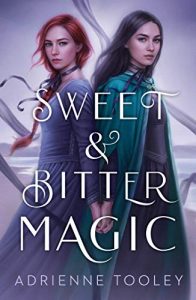 Tamsin is a 17-year-old witch who was banished from her community of witches when she was 12, for committing the worse of magical crimes. Worse, she was cursed, and now she can’t feel love unless she takes it from others. Without love, she can’t see colors, taste food, or feel warmth. When the townspeople fall ill or are in need of big magic, they come to her and offer up their love for their children or spouse in exchange, and she carefully rations that small store of emotion. Wren is a source: someone made of magic, but who can’t use it herself. She would be an incredible book for witches, but she’s kept herself hidden–her brother was killed because of the actions of a witch, and her family fears magic. After her mother died, she’s been stuck taking care of her sickly father, though what she really wants to do is go to the Witchlands and nurture her power. When a magical plague ravages the queendom (including Wren’s father), they team up to try to stop it.

This is a high fantasy story with big, world-ending stakes–but more importantly, it’s a slow burn sapphic romance. Tamsin and Wren have a perfect grouchy one/sunshine one dynamic. Tamsin is jaded, haunted by her past, and literally incapable of love or positive emotion. Wren is bubbly, naïve, and distractible; she sees magic everywhere. They seem like opposites–but in reality, they have most of the same motivations. Tamsin has a martyr complex; Wren is self-sacrificial to a fault. They both have spent their lives living it for others, only to be punished for it. Wren has tried to be the “good girl” her whole life, always making herself small; Tamsin was the star student, a rule follower. In the present day, neither of them thinks they are worthy of happiness.

Together, they have to journey to Within (aka the Witchlands) to begin their hunt for the witch responsible for the dark magic that is causing havoc–the same Within that cursed and banished Tamsin 5 years earlier. I really enjoy “quest” stories that involve a fantasy travel journey, and I loved seeing Tamsin and Wren clash as they tried to get through it together. I only wish we got a little more of their travel Within (where there’s walking cottages and all kinds of weird stuff), but I recognize that probably wouldn’t fit the pacing.

While there is a high fantasy plot here, including magical duels, family secrets, and a world in the balance, it becomes obvious that the heart of this story is the romance between Wren and Tamsin. Wren is frustrated to find herself falling for someone who a) is incapable of loving her back, b) is going to take her love for her father from her as soon as Tamsin completes her end of the deal, and c) is kind of a jerk to her. [spoilers] I loved the element of Tamsin beginning to see flashes of color in Wren. Never has “Your hair is red” been such a swoon-worthy statement. [end of spoilers] In addition to the grumpy one/sunshine one trope, there’s also a “there’s only one bed” moment! Classic.

I really enjoyed reading this romance unfold, seeing Tamsin take down some of her defenses and despite herself begin to see the world through Wren’s eyes sometimes. It’s also about complicated family dynamics and how to see people complexly, even the people closest to you. I know a lot of people will also appreciate that this is set in a world without homophobia: the prince has rejected men and women suitors, and there are same-sex couple side characters introduced with no more fanfare than M/F couples. This is an absorbing read that I can’t wait to see people fall in love with. 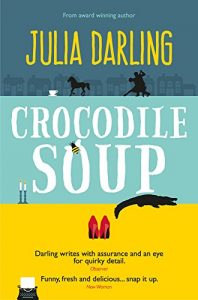 The blurbs and back cover of this book, I think, completely misrepresent its tone. The back cover seems to imply zany fun times, but though Crocodile Soup is written with humor, I wouldn’t really call it chipper.

The main character, Gert, is a lesbian and the present time plot of the story is mostly about her trying to woo a coworker, but this definitely takes a backseat to Gert’s childhood and family. Crocodile Soup is told in very short chapters, usually only a couple pages each, switching between the present and flashbacks leading you through her childhood. Gert and her twin brother were mostly left to their own devices as kids, leading them to both spiral out wildly in different directions. When present-day Gert starts getting letters from her mother, she has to deal with old memories.

Crocodile Soup deals with a lot of fabulism. Some small, magic-ish things happen, and it’s unclear whether they actually happened, or if they’re metaphors, or if–as suggested by her brother at some point–Gert just has a tendency to exaggerate.

Gert, both in her childhood and in her present life, has difficulty finding direction or purpose. It gives the book a bit of a melancholy feel, and I wasn’t sure whether or not I was liking it most of the way through. By the end, though, I think I did find it worth keeping. Crocodile Soup is definitely intriguing; it was one of those books that when I finished it, I immediately wanted to re-read it from the perspective of what I then knew.

Have you read Crocodile Soup? What did you think of it? Have you ever read a book that was completely different in tone than what you were expecting?