If I were going to throw a book down into the middle of a fray between Romance readers and Lit Fic lovers, it would be My Home Is on the Mountain by Caro Clarke. This novel is absolute proof that you can have it all. You do NOT have to choose. You do NOT have to suffer (okay, maybe a little suffering, there’s angst aplenty, but you don’t have to endure the pain for an eternity). You, my friend, can read exceptional prose and get the HEA of your dreams. (Cue Oprah doling out Happy Endings to the readers.)

As though it was plucked straight out of the depths of classic Southern literature, Clarke’s novel is set in Eastern Tennessee in the early 1930’s. As someone who grew up in the south and read my fair share of Southern authors, heaps of Faulkener with a side of Zora Neale Hurston, this book was right up my alley from the start. The novel focuses on the relationship between Cecilia Howison, a privileged young woman from a wealthy, influential Southern family, and Airey Fitch, a local fiddler and hard working young woman living up in the Smoky Mountains. Her family is rich in land, but otherwise destitute. Major themes in this novel include economic inequality, exploitation of the lower classes, religion (specifically Christianity), and societal expectations around gender and sexuality.

One of the highlights of the book for me is that it plays with language and dialect in ways that any self-respecting word nerd should eat up with a spoon. Reference to regional mountain dialect and the perception of words spoken is something the author plays with throughout the book, as well as how language relates to class and education. There is so much to unpack and explore in the novel that I’ve barely mentioned the romantic entanglements of our two MCs, Cecilia and Airey. Their budding friendship is based on Cecilia’s desire to show the world that Airey Fitch is an undiscovered violin prodigy, though she maaay have some ulterior motives as she’s a bit sweet on Airey from the very start.

As the two women explore their relationship further, we start to wade into the waters of religion (with various interpretations) and the societal pressures of the time. We see their individual world views and how they’re shaped by their beliefs in ways you may not expect. But as you might have guessed, the relationship is fraught with fear of societal repercussions and looks doomed from the start. But I’ll remind you, this is a romance. Fear not.

One last thing to say about Clarke’s writing: this was a well researched, and I mean, really thoroughly researched novel. After reading it I went to the author’s website for her book, which details her notes chapter by chapter, with pictures and information on everything from clothing to cars. It is fascinating and I highly recommend you at least scan it a bit during reading, as it includes music as well. Airey can play just about anything on her violin, from old time standards popular in that time to Dvořák and Bach. Descriptions of Airey’s music are well executed, and if you want to listen along, some of it can be found on the website. (Be advised though, the site contains spoilers, so don’t skip ahead.)

10/10 – Now if only someone would come along and make this into a movie! 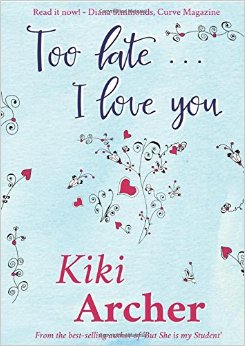 Remember how I was just wishing I could read some romance involving lesbian parents? My wish came true in Kiki Archer’s new book, Too Late…I Love You! It features one out lesbian single mom, a few characters who surprise you, and some truly fun romance. Too Late…I Love You begins with the story of Connie, a young woman living with her boyfriend, Karl, and their three-year-old son, Noah, in London. Connie and Karl had only known each other a few months when Connie got pregnant and they’ve spent the years since then trying to do what they think is best for their child, even though they’ve never really been in love with one another. Karl works long hours and Connie stays home parenting and has recently started writing a romance that weaves its way through the novel. Karl and Connie aren’t terrible to each other, but they’re not happy together either. Connie’s okay plodding along because she adores her son and spends a lot of time with her best friend, Ryan, who’s gay and understands Connie in a way her boyfriend doesn’t. This seems like enough for Connie until she meets Maria, an out lesbian who has always been a single parent. Maria’s daughter, Alice, is just weeks older than Noah, and when the kids meet at playgroup, the children become fast friends. Their mothers bond and discover that they have similar senses of humor, values, and that they love talking to each other and flirting. Their friendship deepens as Connie’s unhappy partnership dissolves, and the characters wind their way to a happy ending–with a couple of surprising twists.

This was one of the most fun romances I’ve read in a long time. The premise sounds like angst might be on the horizon but Archer deftly avoids unnecessary drama. Karl and Connie act like mostly decent if imperfect people, even as they realize they’d do better apart. I appreciated that Karl and Connie’s decisions about their relationship are kept mostly separate from Connie’s growing friendship with Maria, and that they’d already separated before Connie and Maria edge toward anything more than friendship. Maria and Connie’s connection is illustrated through Archer’s excellent dialogue and it’s easy to see why they like being together. Though they get close fast, it makes sense. Both have been hungry for the company of another parent who gets them, and when they find each other, they’re delighted. Ryan and Connie can be judgmental and snarky, especially at the beginning, but they calm down quite a bit, especially once kind, self-assured Maria enters the scene. A novel within a novel can be hard to pull off, but here it’s used to great effect to show Connie’s inner world, the thoughts and feelings she isn’t always ready to admit even to herself.

Another thing I loved about this novel? There’s a minor bisexual character and multiple characters actually use the word “bisexual” to describe her–she even uses the word herself! When Connie wonders if bisexuals are “real,” Maria insists that of course they are. Since Maria is ten years older than Connie and Connie respects her and views her as sophisticated, this pronouncement carries a lot of weight. This book manages to steer clear of most bisexual tropes and that alone is quite possibly a reason to read it.

I also liked how Connie’s feelings and identity progressed in a natural way. She doesn’t have an identity crisis when she realizes that her friendly crush might just be a regular crush, but she does think about whether or not the word “straight” fits her anymore. Her language for herself changes over time. She handles her feelings like a modern young woman who has an out gay best friend, so the novel avoids coming out cliches. Connie also considers the other differences between herself and Maria that might prevent a relationship. For one thing, Maria’s older, more mature and worldly. For another, Maria’s from a family of successful restaurateurs and owns a cafe. Though Maria has stayed home with Alice, she has some work responsibilities, and she has a very different class background than Connie. She also has more sexual experience than Connie. Connie worries more about their real differences and her ability to be a satisfying partner to Maria than she does about her own sexual orientation. I thought this read as very realistic and, more importantly, like the characters were adults.

I cannot emphasize enough how much the characters in this book seemed like grown-ups. The characters’ motivations are understandable. You’re happy when Connie and Karl break up but he isn’t a monster, even if he’s sometimes a jerk. Connie’s concerns make sense and fit her personality. Even things I personally disagreed with–like Maria’s description of what “real” lesbian sex is like–were consistent with and true to the characters. When the final twist is revealed, a character’s previously unexpected actions make sense.

Without giving anything away, there are a couple of big surprises near the end. Some seemed like huge coincidences, but the foreshadowing was decent and I personally thought they were fun twists. In the end, the theme that family is chosen rather than just about biology stays strong, and that’s exactly what I want in a book about queer families.

Plus this book is hilarious. The dialogue and the goofy physical comedy shine. I cared about the characters and had a great time reading about them. I highly recommend this to fans of lesbian romance and anyone looking for fun light reading.