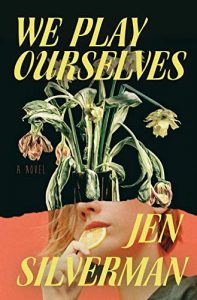 Jen Silverman’s debut, We Play Ourselves, satirizes the contemporary art scene through the eyes of Cass, an embittered former drama wunderkind turned hapless millennial, as she uncovers the secrets behind an up-and-coming feminist documentary. However, behind that beautiful cover and biting wit, We Play Ourselves fails to balance criticism and nuance, and falls prey to the very structures that it pokes fun at.

After being #cancelled in the fray of a viral scandal and Off-Broadway flop, 30-something playwright Cass retreats to the sleepy suburbs of LA to stay with her friend and his on-the-rocks boyfriend. After a listless lull at the house, Cass is approached by a prominent filmmaker, Caroline, whose new project, a subversive, feminist Fight Club starring a feral pack of teenage girls, draws Cass in. After meeting the cast and starting the project, Cass begins to recognize that Caroline’s draw towards these girls crosses the line between muse and manipulator, and must reckon with her place at the heart of an exploitative art piece.

Silverman is an incredibly talented author, whose word choice is always sharp and necessary, and whose sentences string together in poignant prose. She brilliantly constructs the mindset of someone trying to rebuild themselves once they’re stripped to their most vulnerable state. Cass is an unlikable narrator: she’s catty, unempathetic and pretentious. However, your eyes are glued to her every move, and hungry for her backstory. I also found Silverman’s comparison of the limitations of artistic mediums incredibly interesting: theatre is a completely different animal than film, as this juxtaposition is made clear by the alternative perspectives in New York and Los Angeles.

We Play Ourselves takes major media buzzwords, and cultural revolutions, such as the MeToo Movement, conversations of media inclusion and representation and cancel culture, and breaks them down to their core through her sardonic wit. However, this satire can be read as tokenizing or dismissive to real life issues. For example, Cass’s nemesis, Tara-Jean Slater, is a self-proclaimed “turned asexual” after being assaulted by her uncle as a child, who then channels her trauma in a best-selling play and up-coming Netflix show, starring Cate Blanchett and Morgan Freeman as different iterations of her uncle. It’s quite obvious that Silverman is poking fun of the use of big celebrity names to sell products, but it instead comes across as acephobic and ignorant of the real trauma and mental health issues faced by CSA survivors, as Cass is “jealous” of Tara’s “selling point” as a CSA survivor.

This facetiousness is present throught the novel: Silverman pokes fun at tokenism by criticizing Caroline’s “diverse” film with only two non-white leads, but is guilty of the same crime, as no other non-white characters are present in the narrative. Caroline also fetishizes queer women, as she forces BB, the lesbian teenage girl, to fake a coming out to Cass, the only queer person on the film set, in order to garner attention from LGBT movie audiences. However, BB and Cass’s relationship is awkward and forced, contrived by BB’s crush on Cass, and the uncomfortable age gap between the two characters. The film storyline is extremely fraught with these problematic elements, and does little to reckon with them: I much preferred the New York theatre scenes to the Los Angeles film scenes, and would have preferred a narrative without the film aspect. We Play Ourselves is a narrative journey through the lens of a disillusioned young adult in the pretentious art scene, but does little to critique the issues at its core.

Thank you to NetGalley and the publisher for an advance copy 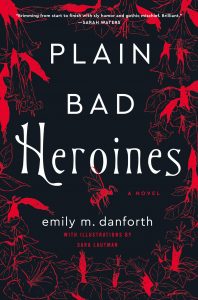 I finished this book back in November, but I have frankly been intimidated to review it. This is a big, twisty, ambitious novel that I’m still processing now, but I’m going to give it my best shot.

I have been eagerly awaiting this book ever since I finished the last page of The Miseducation of Cameron Post. This is my favourite YA book of all time, and ever since it came out, I’ve been following Danforth online to see what would come next. At some point, she talked about two different books she was working on: one tentatively titled CELESBIANS! and one that followed a copy of The Well of Loneliness throughout time called Well, Well, Well. As the years went on, I thought those had been abandoned, but after reading this book, I can see how they got incorporated into this story.

Plain Bad Heroines is a horror story that begins in a girls’ boarding school in 1902. There, a writer named Mary MacLane is getting a cult following. MacLane was a real-life figure who published her scandalous memoirs, now titled I Await the Devil’s Coming. They are feminist, bisexual, and blasphemous. (The ARC came with a page from Danforth explaining her coming across this author, and how frustrating it is that she only heard of her recently from a footnote.) There are two girls at this school who are particular fans of MacLane, and they sneak off into the woods to read it together (and to make out, let’s be honest). One day, a relative tries to split the two of them up, and they run further into the woods to try to escape. Instead, they stumble on a sprawling wasp nest and die gruesomely. They are found with MacLane’s book beside them, and more deaths begin to be associated with this copy of the book.

More than a century later, a book has been written about this history, and it is being made into a movie, and the women involved in the production begin to feel haunted by the past. There is Merritt, the young (cranky) genius who wrote the original book; Harper Harper, the “celesbian” star of the film; and Flo, a relatively unknown actor playing Harper’s love interest. They’re all queer, and they have a complicated relationship between the three of them. Merritt is critical, Flo feels out of her depth and vulnerable, and Harper tries to keep the peace between them (and hit on them). As they’re filming, though, they encounter mysterious events on set–it’s unclear whether this haunting has continue with them, or whether it’s all part of an immersive Hollywood experience.

That is the very bare-bones description of the plot, but that’s only scratching the surface. We also get the fascinating story of the headmistress’s founding of the school and the feud between the brothers on that land that is said to have started the haunting. There are so many different stories spiraling together, and almost all of them have sapphic characters (including the headmistress and her partner). The characters are flawed and complicated; they clash with each other.

This is billed as a horror-comedy, and there definitely is wry humor included. It’s self-referential and plays with horror tropes. At the same time, it is creepy and disturbing: you’ll never look at a wasp the same way again. This book is intricate and incredibly well-crafted: I was about two chapters into it when I thought, “Oh, this is how books are supposed to be written.” Even though it bounces around in time and between characters, it all locks together and never feels out of place.

I appreciated the skill involved here, and I love that this is such a queer book absolutely brimming with sapphic characters, but I’m not sure I’d say I enjoyed reading it. It was unsettling. I also felt like I couldn’t quite penetrate through to the core of the story. What started this haunting? What does it mean? I love that there are so many queer characters, but it also means that they are the ones being targeted: why? Is it a metaphor for homophobia? That feels too pat for this story, and it doesn’t quite fit. Is even asking that question too simplifying? I’m not sure I have the skills to unpack everything this story is trying to accomplish.

This is a complicated, ambitious novel that will leave you thinking about it long after you’ve put the book down. 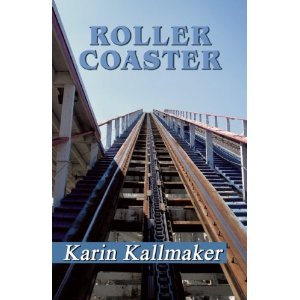