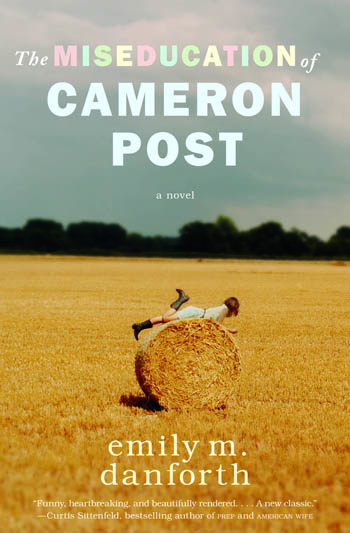 If you follow other les/bi/etc book sites, or have been skimming the link round ups at the Lesbrary, you may have already heard of The Miseducation of Cameron Post. In fact, you may have already heard about it from a mainstream source, because Cam Post is published by a large publishing company (HarperCollins), and it’s been getting reviews all over, including in large newspapers. And that’s exciting, because there are not a lot of lesbian teen books, and it’s the demographic that is probably most in need of books that represent themselves. Not only is this a lesbian teen book that is getting publicity and therefore has a chance of making it into the hands of people who need it the most, it has been getting good reviews. Very good reviews, in fact. Needless to say, I have been really excited to get the chance to read and review it myself.

Cam Post is a big book, especially for teen lit–it’s pushing 500 pages–but I ended the book desperately wishing it was longer. Most of the book is paced pretty slowly, meandering through Cameron Post’s adolescence. It’s less of a coming out story and more of a bildungsroman: a coming-of-age story. Cameron struggles to come to terms with her parents death as well as her sexuality, while being raised by her conservative, religious aunt in a small town in Montana in the early 90s. The strength of Cam Post lies mostly in its protagonist, Cam, a film buff who decorates her childhood dollhouse with small, stolen tokens–weaving miniature gum wrapper rugs and wallpapering with used stamps–while drinking and exploring an abandoned hospital with the guys. Quirky enough to be interesting, but not so much to seem unbelievable, you can’t help but cheer Cam on.

Part of the appeal of Cam is emily m. danforth’s writing. She has a talent for establishing scenes, including all these tiny details that make the book come alive. Cam’s whole world is fleshed out to seem utterly believable–even characters that only appear for a few pages seem well-rounded and interesting. danforth establishes Miles City especially well.

It’s about half way through the book that the main tension of the book appears, and it only really comes to head near the end of the book. When I began to get near the end of Cam Post, I kept wondering how it was going to be wrapped up. And it isn’t, really. But in retrospect, I realized that the end really did fit the arc of the book. But I definitely would have been happy to have more, hundreds of pages more. I think it is unlikely that danforth would write a sequel, but I look forward to her future books either way.

Two small side notes: one is that I enjoyed that Cam Post was not just focused on one relationship. Cameron (minor spoiler) has several relationships throughout the novel, and they are not treated–as lesbian relationships in teen books often are–as if they are the defining relationship of her life. Each is significant, but Cam Post is about her as a person, not as half of a couple.

The other note is that I was pondering the meaning of the title when walking to work (I’ve actually been reading Cam Post while walking the last couple days, unable to put it down, but I got to a pedestrian-heavy spot), and I thought about how universal that “miseducation” is for queer people. We almost all have to first learn a version of the world that doesn’t include us, or that portrays us incorrectly, and then we have to relearn ourselves. The Miseducation of Cameron Post shows a more extreme/literal version of this, but I think it touches on something that speaks to most queer people.

The short version of this is that I adored The Miseducation of Cameron Post. I spent the day counting down when I could read it, reading it while I walked to and from work and on my breaks. I would definitely put it in the hands of any les/bi/etc teen, and I would also recommend it for anyone looking for… well, for a good book! It’s compelling, interesting, and frankly beautiful.

15 Replies to “Danika reviews The Miseducation of Cameron Post by emily m. danforth”