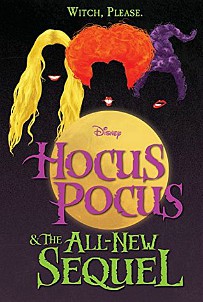 First things first, to get it out of the way: a delight in certain sorts of campy horror is in me at the bone-marrow level. My mother went into labor with me early, and I came squalling into the world a bit after eight PM on a Friday Halloween, under a full moon. This led to me being raised to be as passionate about the holiday as you might expect, costumes and sweet tooth included. I stand way, way too close to this subject material to be really impartial in any strong sense, and that is going to strongly color this review.

The movie Hocus Pocus was released in 1993, and starred Bette Midler, a pre-Sex and the City Sarah Jessica Parker, and Kathy Najimy as the Sanderson sisters, cannibalistic, child-stealing witches hanged in the 1600s and accidentally brought back from the dead by the protagonist, Max, a kinda-mansplainy teenager. There’s pretty blonde love interest Allison, sweet but precocious younger sister Dani, and poetically-handsome youth who’s stuck for 300 years in the body of an immortal black cat, Thackery Binx (which is just so much fun to say out loud. Try it).  All the kids have to do is last out through the night, and the Sanderson sisters will return to the grave, but that’s still a lot to ask of a trio of kids when none of the adults in their lives will listen to them. Standard 1990’s movie fare, basically, and though it made a fair amount of money, it didn’t do well in the reviews.  However, its later life on television made it into a cult classic, and I’m pretty sure it’s still running on the Disney Channel every Halloween. I know that I watched my VHS copy of it so many times that it’s got a couple of permanent audio track wiggles here and there.

But while I loved the movie as a young Halloween fanatic, there are two things I identify as that weren’t at all represented in it: 1) a person of color, and 2) queer as the day is long, twice as queer on Sundays.  I have to admit that I probably sympathized more with the counter-culture witches, evil though they were, than with the milkskinned blonde girls or early colonists depicted as the protagonists.  This is all to say that when I heard that the sequel had a black lesbian in it, I made an actual, audible noise, to my cats’ consternation.

The book turned out to be two stories in one cover. First, there’s a novelization of the original movie, and while I admit I didn’t linger here, out of a hurry to get to the good stuff, I was surprised and pleased at several points.  There are things in the original that would put a frown on my face today (casual sexism being the strongest contender), and while the novelization is entirely true to the source material, it also gives us something we couldn’t have in the original: a view into the protagonist’s head, where he editorializes and makes judgments that go a long way toward smoothing out all those rough parts.  At the same time, it still maintains a very 90’s flavor, even in the incidentals, like young Dani swearing to herself that if she makes it out of this alive, she’ll never make her brother watch DuckTales with her again. So if you have the leisure, even if you too have seen the movie a hundred times over, I do recommend giving it a read.  That said, if you’ve seen the movie even once, you can skip to the sequel without missing anything important.

The sequel is unnamed, probably because if they manage to make it into a movie it would just be Hocus Pocus 2 anyway, and it starts on Halloween morning after a 25-year timeskip.  The protagonist is high school sophomore Poppy, Max and Allison’s daughter, who is feeling stifled by what she thinks of as her parents’ paranoia about the holiday. Despite growing up hearing her parents and aunt tell the story of that by now long-ago Halloween, she doesn’t believe it in any visceral fashion. Along with her best friend Travis, and Poppy’s straight-A, totally cool crush Isabella, Poppy more-or-less accidentally treads in her father’s footsteps, and brings the Sanderson Sisters back again, with a twist.  Instead of merely having to make it through the night, they have to defeat the sisters before dawn, or else spend the rest of their lives in a world given over to evil witches.

I genuinely don’t want to spoil you, here.  Usually I’d talk about trigger warnings, about violence or assault or things that threw me out of the narrative, but let’s be honest, this is a Disney novel. The things Disney does that are worth trigger warnings, it usually does by accident, and I’d spill a thousand words of digital ink on those alone.  This novel is deliciously free of such complications.

That said, it was deeper at points than I expected.  If the overarching theme of the original is that scoffing and refusing to listen to others’ concerns will land you in hot water, the second half’s theme is a lot more complex. There are a lot of callbacks to things done in the first half which still have repercussions 25 years later, and a strong understanding that this is the same world. For instance, Max left a bully in the hands of the witches on that Halloween night, and now that ex-bully is the Principal of the school where Max teaches and father of the biggest social irritation in Poppy’s life. If this book is about anything in particular but giving the reader a good time, it’s about overcoming the willful mistakes made by those who came before us, and learning to do better than they.  “You, all of you, despise me for things you believe me to have done—and yet I knew the greatest mark upon my soul was doing nothing at all,” says a character punished for another’s crimes, and that grief reverberates through the centuries until Poppy and Isabella have to learn from it.

How do we make up for what our predecessors did, without at the same time being weighed down with guilt for their crimes? How, in short, do we do better?  The book seems to suggest that the answer is twofold.  First, be willing to recognize those acts in the first place and refuse to repeat them. Accepting that something horrible did happen doesn’t mean resigning yourself to the idea that it will do so again through you.  And second is to eventually be able to allow the next generation to take over.  “What’s the value of youth?” a character chides Winnie Sanderson.  “You were meant for greater things than being young.” Pit that against the ones who want to hold power with their teeth and fingernails if necessary (“Who needs a line of succession when you’re immortal?”) and you’ve got a conflict that wouldn’t be out of place in a greater literary work.

All in all, I gobbled this book like a bag of single-serving Snickers, and I enjoyed every chomp.

Things I liked: Representation! Isabella and Poppy are queer. Isabella and Travis are both black, but really different in personality, without either of them being written in a fashion that struck me as at all stereotypical. Their differences extend even to their conflict-management techniques, with Travis stating that his mother taught him to ignore bullies, and Isabella laughing that hers believes in the power of lawsuits.

There are multiple other people of color as incidental characters who nevertheless are presented with personalities of their own, from a Latinx classmate to their teacher, Miss Chen, with her penchant for black T-shirts. I feel like it’s hinted that one of the young men in their class is interested in other boys, but that’s a squint-and-you-miss-it sort of thing that I might have been wrong about.

I appreciated that Poppy is actually able to learn from the experiences of those who went before her, and while the book necessarily starts with her making the same mistake her father did, she’s able to navigate it more deftly, thanks to being able to draw on his old stories.

I liked that even though this is a YA Disney novel, it doesn’t talk down to the reader. It’s not grimdark and hopeless, it’s not a post-apocalyptic nightmare story, it’s a popcorn novel, but it’s a very fun representation of the genre that respects its reader’s intelligence.

Things I disliked: This is another Disney story with a PoC who gets turned into an animal. I could do with fewer of those in the universe. WoC need to be able to have their faces in view for the representation to be real.  That said, since this is a book and not a movie (for now?) the problem might not be as serious as it is in visual media.

I found myself frowning over the fact that the author’s name appears nowhere on the cover.  I know that this is a thing Disney frequently has done to its creators in the past, traditionally preferring to give generic thanks to their creators instead of specific acknowledgments.  While the author’s name does show up on one single page inside, it would have been nice to see it on the cover, and in at least as big a font as the company’s, as opposed to entirely absent.

And while it’s not actually an outright dislike, it’s just a little odd to have a movie novelization for a movie that doesn’t exist.  I don’t mean that it’s odd to have a new story, but that this reads very clearly like the novel version of a script. There’s a musical interlude, for instance, with lyrics interrupting the action—I’ve never heard the music, so it comes off a little bit like the early-oughts songfic craze that so many fanfic authors were prone to indulging in. But as complaints go, that one’s really, really minor.  I have no qualms about recommending this book to more or less everyone who enjoys reading YA, and recommending it very strongly to anyone who enjoyed the original movie.