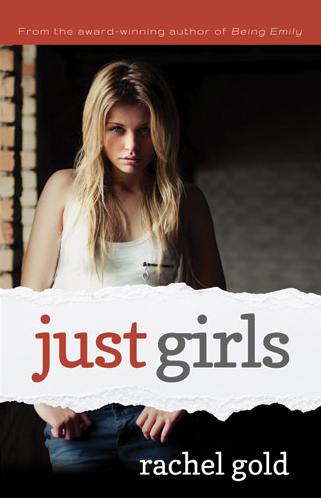 Just Girls is one of the new releases that I was most excited about reading, because I found the premise very interesting. It tells the story of two women in college: Tucker, an out cis lesbian, and Ella, a bisexual trans woman. The book cycles between their perspectives. When Tucker finds out that people are speculating about who the trans woman is in the dorms and being generally hateful, she angrily defends the anonymous student and spontaneously “outs” herself as trans in order to take the brunt of the hate herself. The idea of a cis person pretending to be trans for any reason could go very badly, no matter how noble the intentions (not to mention that the author is also cis), but I still wanted to see where the story would go–not to mention that lesbian fiction is severely lacking in trans women characters.

Surprisingly, though the premise should have been much more of a minefield than Gold’s previous book, Being Emily, I ended up really loving this one. Emily and Claire (her girlfriend) do make appearances in this one, but they are minor characters, and you don’t have to read the two together or in order. The two things that really struck me in this narrative were the realism and the scope of the novel. While Being Emily is narrowly focused on the experience of being trans, its successor weaves this in with other issues of sexism and being queer. It also shows a different reality than the previous book: while Emily experienced a lot of push back from her coming out, Ella had a supportive family and community. She was able to access the hormones and surgery that she needed, and she had a strong support system. That isn’t to say that it was easy for her, but it was definitely different from Emily’s experience, and I appreciated the acknowledgment that there isn’t just one trans experience.

Again, I can’t speak to how accurate the portrayal of being a trans woman is, but the depiction of the LGBTQ crowd on campus definitely rang true. The drama, the friendship, and [spoiler, highlight to read] yes, even the abuse [end spoiler] seemed to mirror the community that I participated in during university. I had to laugh at the paragraph

Tucker pulled a piece of paper out of her notebook and scrawled on it: Are Vivien and Summer still together? Yes. No. Cal was sitting next to her and she put it in front of him. He looked at it for a minute, then picked up his pen and circled both Yes and No.

Ella also has to deal with sexism on a daily basis, especially as a woman in science. She has several great moments where she reacts against these microaggressions, including when she’s questioned on her gaming prowess and says

“All my high scores are in Pretty Princess Magical Rescue Adventure,” I deadpanned back.

“Me, too,” Shen said in mock surprise.

“I bet my unicorn would own yours,” I told him.

There is also quite an array of diversity in Just Girls; I was especially glad to see that Ella is bisexual (although she doesn’t necessarily identify as such yet, the word “bisexual” is actually used in text, which shouldn’t be worth nothing but still is), and there are PoC characters, though both Ella and Tucker are white. Nico, Ella’s friend/ex is genderqueer and Ella describes per/yo (Nico changes pronouns fairly regularly) as looking, in one outfit, like an “Afro-Asian god/dess”. One of Ella love interests is Shen, who is Chinese, and his cousin Johnny, who is Chinese-American, also a significant side character. Shen is quiet and subtle, and may have come off as stereotypical if he was the only Asian character in the novel, but Johnny’s boisterous personality balances them out.

As for my original concerns with the premise, like If You Could Be Mine, I thought that it managed to navigate that minefield pretty well, but I recognize that other people might disagree. (Hang on, why do this book, If You Could Be Mine, and Adam all feature cis characters pretending to be trans? And written by cis women? That’s an alarming trend. Though this book also features a trans woman main character, of course.) I was worried about it: there is a moment where Tucker attempts to look more masculine to fit the trans persona, and at some point Ella looks at her with tears in her eyes and says she’s “so heroic”, which screams “cis saviour” to me (like “white saviour“). Another character also says that Tucker is being brave for pretending to be trans, and Tucker says that more people should do so.

At the same time, it made me think about the various protests where straight people have “played gay” as protest to anti-gay demonstrations, and this generally viewed positively. Is “playing trans” to protest anti-trans sentiment a similar action? What really changed my mind, though, is that Tucker faces consequences for this action. (More on this in the spoiler section.) And Ella acknowledges the difference between Tucker saying she’s trans and the reality for trans people, when she thinks that sure, if a cis woman tried to use the men’s room as protest they’d just be told to stop, “but what if she’d been a trans student?” As a cis person, Tucker can step away from this, at least to some degree, if she chooses to.

I really think this book has so much packed into it. As I started to write this review, I realized how much I want to say about it. If you’re curious about Just Girls and wanted to remain unspoiled, I definitely recommend giving it a try. The characters are complex, the story is compelling, and it’s packed with things to think about. Highly recommended, though I would definitely put some trigger warnings on that recommendation (transphobia, violence, rape).

Lots of the things I want to discuss happen in the latter half of the book, so spoilers below.

One of the things that I really loved about this book was how the idea of community was handled. There is an LGBTQ community, but that community isn’t necessarily safe. Ella (and Tucker, when she is “playing” trans)  is rejected by both feminist and queer community members (though they are accepted by others in that community). Nico has yos gender interrogated by LGBTQ community members. The TA in Tucker’s Gender Studies class is openly transphobic. In contrast, when she outs herself to Shen, he is completely supportive. That isn’t to say that there isn’t positive queer communities, only that Ella is able to find community in a range of places: through select queer people, cis/straight people, and even supportive strangers.

Shortly after Tucker “comes out” as trans, she is attacked because of it. It’s an odd mix, because Tucker faces the physical effects of this, but Ella deals with the personal effects of knowing that she was the person who that attack was meant for. Later, Tucker is raped by her ex-girlfriend, a woman well-respected in the Gender Studies field and part of the school’s LGBTQ community. Ella tells Tucker that since she protected Ella earlier in the semester, she would protect Tucker now.  When she goes to the administration, she doesn’t get a lot of support. Ella realizes “So she could end up having to walk to class every day on the same campus as her rapist”–which instantly reminded me of the Columbus student who is protesting her rapist’s continued presence on campus by carrying her mattress as a visual sign of the weight of her trauma.

Ella rallies support around Tucker, partly by rallying a crowd through Johnny and Shen’s gamification of a protest, and partly by coming out to said crowd and indicating that Tucker had put herself on the line in order to protect Ella. This protest as game is ingenious as a strategy, and it also is heartwarming. I found myself tearing up as I read about this group of people willing to protect victims and protest the school board’s lukewarm attention to this. Again, I was reminded of the follow-up protests in Columbia, in which other students helped to carry the mattress in solidarity. In this community, Tucker is able to feel safe as she is escorted to classes. When she finds out that Lindy’s previous girlfriend was also abused, she is able to access that rage and act on it, not to protect herself, but to protect others. Both Tucker and Ella grow a lot throughout the book, and are able to support each other to get through it. I think that is what saves it from being a “cis saviour” narrative: first, Ella is just as big a part (if not bigger) of this story than Tucker is, and second because the support is mutual, and they end up on even ground.

I do have some complaints. There are some remarks through the book that I disagree with, but I acknowledge that Ella and Tucker are not perfect, and that doesn’t mean the book supports their views. (For example, Tucker pities the plight of women in far off countries who are being oppressed, and wishes she could take them to the US to be saved. Ella, when being concerned about having sex, thinks that some people fetishize the “hermaphrodite” look.) One point that I couldn’t dismiss, though, was the ableism: Lindy’s abusive actions are chalked up to some indeterminate mental illness, as if neurotypical people cannot be abusive, or people with mental illness are more dangerous (instead of the reality, which that they’re more likely to be victims of violence and abuse). Also, when Ella meets Lindy she muses that maybe she has “high-functioning, undiagnosed Asperger’s” (which doesn’t even make any sense: how would you know whether she’d been diagnosed?) Also, as a small complaint, I’d rather that Lindy hadn’t been a plagiarist. The truth is that there are people who are well-respected in their field and who are also abusive. It seems too simple to say “Well, she was a terrible person, therefore that paper than was so acclaimed must not have actually been written by her”.

Another minor point, but I also thought the depiction of the Gender Studies class was pretty unrealistic. In one, the teacher asks how many people think sexism is over and feminism is no longer needed, and half the class raises their hands? Maybe it was the hippie left coast university I went to, but in my experience, almost no one takes Women’s Studies or Gender Studies who isn’t already feminist-leaning. People who disagree with feminism tend to have very little interest in those classes. Also, the teacher (who is supposedly trans positive) takes on an openly transphobic TA, and then doesn’t correct her while she is spouting off transphobic, ridiculous arguments to a student? And then says “I want you to learn to stand up to an opposing viewpoint on your own,” though she acknowledges that she wouldn’t expect that if it was anti-feminist criticism? Again, maybe it was just my hippie university, but I have never seen a Women’s Studies teacher do that, at least not one who’s well respected.

I do have some complaints, and I definitely think that other people could get completely different things out this book (I would love to read some reviews by trans women in comparison), but I would definitely recommend this book, if just for the sheer amount of discussions it raises. As a beginner to trans issues, I’d recommend this over Being Emily, and I think it would be a less triggering read for trans readers as well (though it does deal with transphobia, violence, and rape), because the main characters begin the novel already trans positive. I’m really glad this book is out there, and I hope it gets a lot more attention.