Considering how important Asbury Park and its history was to me in my formative years, it comes as no surprise that this is the comic I recommend to literally every sapphic I have met since it was published. Seriously, it’s got a diverse cast, excellent characters, genuine heart and all the campy hijinks of golden age action comics and 90s teen girl movies combined. It. Is. AWESOME.

We first meet Chris, an almost-seventeen tomboy with an adorkable crush on her already-seventeen co-worker Maggie. They are part-timers at a record store somewhere in suburban New Jersey, along with bitter goth Dolores and “music encyclopedia” Kennedy. In between juggling normal teen angst and crushes, they are also trying to find a place where they belong, where they can make a difference.

Seems like a solid set up, right? One rife with potential for girl-meets-cute-girl moments in diners and backroom recording studios, sprinkled with loving references to punk rock and riot grrrl?

There is a fight club in the basement. And a conspiracy involving a bunch of missing bands that should sound very familiar to anyone who was even remotely adjacent to the alt-music scene at any point in their lives. And an anarchist with anime hair (This is a compliment).

Did I mention this comic is a love letter to 90s alt-culture? It’s a really sweet story that hopefully gives younger readers a glimpse into history and older readers a fun, funny read. To say more about the plot would venture into spoiler territory, as it is admittedly pretty straightforward. There is a mystery, but this is not a mysterious comic.

But we deserve self-indulgent, cheesy nostalgia content as much as anybody else and the two volumes are exactly that. They are delightfully warm, bright, and smile-inducing. There are healthy relationships that are still chock full of teenage weirdness and awkward moments. The characters share a genuine camaraderie, and even when they aren’t at their best, they are human. They care about each other and they are ready to throw down when necessary. They are going to save the world.

I know I would have love, love, loved a story like this when I was a teen, and I hope this book delights other young women in the years to come.

It is common for comics to be listed under the name of the writer. But they are unquestionably group efforts, pieced together from the inspired minds of many. So, credit goes to penciler Nina Vakueva, inker Irene Flores, and colorists Natalia Nesterenko and Rebecca Nalty. The pages would not exude as much energy or vitality without their efforts. 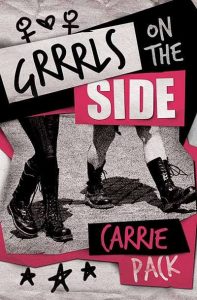 I was so excited to read this queer Young Adult novel, but unfortunately it was a big disappointment. Before I get into my criticism, let me explain the premise, and why I was so excited to read it. Set in 1994, Grrrls on the Side is about Tabitha, a fat white girl who feels like an outcast stumbling across a movement of Riot Grrrls nearby. As someone who loves zines and some aspects of riot grrrl, I was really intrigued by the synopsis, and I had also just read Moxie which is another Young Adult novel but this time focused on contemporary girls reaching back to riot grrrls for inspiration. Moxie was disappointing to me for various reasons, some to do with the way race was represented and also because queerness was almost completely erased from the narrative. When I remembered that Grrrls on the Side had canon queerness in it and was also about Riot Grrrl I thought it would satiate my itch for some good angry queer punk girl YA, but once again I was wrong!

Grrrls on the Side is a confusing and fluctuating story – Tabitha is very inconsistent in so many ways, leaping from one feeling, one breakup and one crush to the next, and not in a way that was believably adolescent. It was weirdly paced, intensely focused on romance in a really unlikely and often confusing way – random characters would be mentioned once as being present in a scene completely out of the blue. A lot of the characters, including Tabitha, are like light switches in terms of their emotions: one minute they are crying and the next laughing – its very hard to keep up with and enjoy. One of the threads of the novel – that being Tabitha’s sexuality – is just oversimplified: at first she has turmoil about being bi and thinks about it a lot, but as soon as she’s in another relationship, it completely disappears from her mind, except when out of the blue, one of the love interests says really biphobic things to her (which I personally found to be very frustrating and out of character for her).

There were three black girl characters in the novel, Venus, Monique and Jackie, and of those three Jackie was the only one to get more of a personality than her blackness. Venus and Monique were consistently present to draw attention to the racism not only of the Riot Grrrl movement (and especially one specific character), but also to Tabitha. A character arc of the novel is that Tabitha finally understands that she won’t ever understand what it’s like to be black, which is such a disservice to all three black characters, and the idea that Tabitha, a white girl, is the focus point of a narrative supposed to highlight how black women and girls are the ‘grrrls on the side’ is reprehensible. I just cant understand why the author would choose to sideline the black characters in a story that she was in control of creating!

On top of the stereotypical and flat representation of these three characters, there is also a Chinese American character named Cherie who doesn’t seem to register as a person of colour in the context of the group or the narrative, like her presence isn’t seen as a ‘problem’ in the way the black girls are?!

I don’t want to end this totally negatively, so here were some good aspects: Throughout the chapters the zines that some of the girls make are included, and it was always so fun and lovely to read. It really made it seem like riot grrrl, like a bunch of messy, angry, contradictory weird girls were making things and enjoying it for themselves. My favourite character was Jackie, because she was a tender butch lesbian and she was so sweet and patient. Lastly, there was a really cute moment where Tabitha met an older woman who had also been part of a women’s liberation movement, and they had a lovely connection and promised to write to each other! Intergenerational solidarity is the best!

There’s one instance of sexual assault in this and some discussion of r*pe nearer the beginning of the novel.