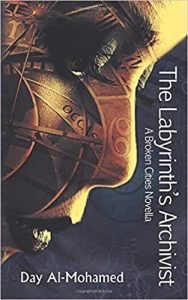 Are you looking for a book with a diverse cast, compelling story, great worldbuilding, and disability representation? Lucky you, because you have The Labyrinth’s Archivist.

This fantastical novella stars Azulea, the newest in a long line of Archivists, the people who interview travelers and make maps of the worlds that extend out from the Archivists’ Residence. Azulea desperately wants to join her family’s vocation, but she is blind and therefore assumed to be incapable. When someone (or something) starts killing Archivists one by one, Azulea puts her mind to solving the mystery.

There were so many things I loved about this book. For starters, there was the amazing disability representation. The author, Day Al-Mohamed, is blind herself, so the representation was very authentic. I love how Azulea’s blindness was incorporated into the story, but didn’t make it seem like inspiration porn. It was also very refreshing to see disability representation in the fantasy genre, where we certainly don’t get enough of it. More than just painting Azulea as an inspirational story, the novella really dives into the challenges of being blind in a fantasy world. Physically and psychologically, Azulea must adapt to her surroundings. The Labyrinth’s Archivist is worth reading for this aspect alone.

Another part of the novella I loved was worldbuilding. The world of the Labyrinth was so detailed and intricate. Every setting was so beautifully described. I could picture every scene like a movie, which is something I love to see in a book. The world is heavily influenced by Middle Eastern culture, which also gave it a sense of depth and richness. The opulence of the Residence itself shines throughout the novella, and serves as a wonderful backdrop to the central mystery. The story itself reads very quickly, too. It’s like a fantasy version of an Agatha Christie novel. I flew through it. If anything, I thought it was too short.

Even given everything else, for me, the best part of this novel was the characters. Azulea is a really wonderful protagonist. She is spirited, resilient, and determined. I was happy to spend the entire novella following her. Her relationships with other characters also stood out. I loved reading the interactions between Azulea and her mother. They had a difficult, but ultimately very authentic relationship. Same with the relationship between Azulea and her grandmother. Finally, the romance was also very sweet. I wish we had gotten more of that as a plotline, because it does come up quickly towards the end of the story. Still, the engaging and complex characters made this book a real page-turner for me.

The Labyrinth’s Archivist is a short, refreshing, fun novella that blends fantasy and Middle Eastern culture in a beautiful way. Its characters are very interesting and drive the story forward. It involves disability representation and worldbuilding that are truly unique. Although it is short, this book is definitely worth your time.

The Labyrinth’s Archivist, the first in the Broken Cities series, follows Azulea, the daughter of the Head Archivist and granddaughter of the former Head Archivist. The Labyrinth contains winding paths and hallways with gates to other worlds, and the Residence, where the Archive is housed, is a safe way station for passing travelers and traders. But when Azulea’s Amma dies unexpectedly, she suspects foul play. It’s up to Azulea and her friends to solve the murder mystery before more Archivists are lost to the killer.

Al-Mohamed creates a rich and diverse world with her multi-species cast of characters and delightful sci-fi setting. It’s never stated whether or not this world is set on the Earth as we know it, but enough clues make it sound like it’s off planet. The bustling marketplace life with its many beings from different planets and worlds will make the story strongly resonate with fans of the Star Wars franchise.

Though that is the case, it is clear that Middle Eastern culture heavily influences the makeup of this world. The marketplace, where a majority of the story takes place, is referred to as the souq, giving readers just enough detail to know this world is inspired by an Arabic or Middle Eastern society and culture. Details abound about the food people eat, like aish, and the use of spices like cumin and cardamom, common in South Asian and Arabic cuisine, indicate these cultures as the foundation for the Residence’s world.

My favorite aspect of the whole story is Azulea’s character. She is a queer woman of color with a disability; she is blind. In the Archivist tradition, individuals should be self-sufficient and able to complete the tasks the job entails without assistance. Azulea challenges those traditions though by enlisting the help of her best friend and cousin, Peny, who is coded as having a learning disability. Together, they can be Archivists. While Azulea is the mind that processes and analyzes information quickly, Peny is the eyes that can see and draw the maps Azulea describes.

The Archivist society’s views of people with disabilities can be interpreted as a commentary on how our own real-world society treats the differently-abled. Azulea proves that, given the proper tools and resources to even the playing field, she is just as capable of getting the job done as an able-bodied person.

But Azulea isn’t the only one proving this. Peny also defies expectations by supplying the main character with the skills she lacks, as well as by learning the trade despite her learning disabilities. Another character named Handsome Dan is portrayed as an amputee with a symbiotic tentacle as his “prosthetic” leg. The novella is rife with people with disabilities, and they are all full, complex characters, capable, competent, intelligent, and independent spirits. The fact that they need assistance doesn’t make them any less so.

Azulea’s mother is stubborn and rooted in the old ways, but her Amma always believed she could follow in their footsteps. That’s why when her grandmother dies under suspicious circumstances, Azulea charges forward with the task of finding her killer, despite the doubts coming from her community and even her own mother. It’s this persistence to succeed in a world that favors the able-bodied that makes Azulea such a great character to root for.

The queer romance did not dominate the story, but it added another element to the sci-fi murder mystery arc. Azulea and Melehti have a history, and as events unfold, that chemistry returns and can’t be ignored. It’s stated that their relationship didn’t work out because Azulea felt that accepting Melehti’s help made her dependent, and as a blind woman, she didn’t want to lean on anyone’s help for too long.

This aspect of the story brings another layer to Azulea’s characterization, as it shows that even she suffers from her society’s mentality of disabilities. In a world that deems the disabled as incapable, Azulea has put herself through so many hoops to prove she isn’t, often to her detriment.

Overall, the biggest weakness of the novella is just that: it’s a novella. There were so many places that felt like they needed a deeper dive and more room to breathe, which could have been accomplished if the story had been written as a full-length novel.

Even the Labyrinth that’s in the title barely gets explored throughout the story. It never details where the Labyrinth came from, how a city came to be built around it, and the role it plays in their world. Much time is spent on its Archivists and how they interact with it, but apart from the Residence, not much is known about the Labyrinth itself, which makes the story feel like it’s missing something, considering the novella’s title.

That being said, it is still an excellent read and highly recommended. I know I want to read the rest of the series.

“May your memories keep you warm”

The Labyrinth’s Archivist is a novella by Day Al-Mohamed that follows Azulea, a trainee from the Shining City that wants to be an Archivist. An Archivist interviews cross-world traders and keeps an updated archive and repository. She has a lot of vision and intuition even though she is blind.

She and her cousin Peny complement each other in their learning and work. This is not looked at kindly in the Archive, where each Archivist has to be self-sufficient. Azulea especially wants to prove herself and be taken seriously. She gets this chance when a terrible tragedy occurs. Her Amma dies and Azulea believes it to be murder.

For such a short novella, the story is action-packed. I read it nearly all in one day. This novella is a mixture of fantasy and mystery: my two favourite genres. The murderer was a bit predictable, to me. Although there were many suspects, however, the new spins to the world and the plot kept the story interesting. There definitely were some twists and turns, some of them were refreshing and not tropes.

Melethi is Azulea’s ex. She is also the leader of the market guard and arbiter and of course, gets involved in solving the crimes that happen. Even though it’s short, there is character development.

The Labyrinth’s Archivist is part of the Broken Cities series and was released in July 2019. So far, there is only this book but I look forward to keep up with this series. It looks promising. Most world building in fantasy novels, especially if short, could be confusing. There were times where I found myself asking ‘What is that?’, but with time, it all cleared up.

One small thing that I liked about this book is the culture. I live in the middle of the Mediterranean sea and my language is a creole one that combines Semitic (Arabic), Anglosaxon and romantic languages. The culture and especially the words felt similar and I could connect to this world. The souq (market) is like my suq and the fūl (broad beans) are the ful that I eat each summer.

I feel that such a series, like my favourite the Mangoverse series by Shira Glassman, would be appreciated by people living in the Middle East and North Africa and the Mediterranean region or people interested in non Eurocentric/Americanized  fantasy, of which there aren’t that many, especially if queer.

All in all, it’s a good introduction to a new series. Azalea has many opportunities ahead and I look forward to see which she will take. I wish to read more about this world and the Labyrinth of worlds and want to see new worlds and exploration.