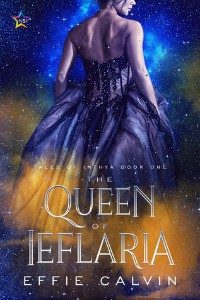 Fantasy was the genre that got me to love books, but I fell out of love with it as I couldn’t find any books with characters that weren’t straight or cisgender. I was browsing through recent LGBT releases and found The Queen of Ieflaria by Effie Calvin, which has turned out to be everything I was looking for.

Princess Esofi has traveled far from home to the foreign land of Ieflaria to wed the crown prince, but upon arriving finds he has died in a sudden accident. Their marriage had been planned since they were babies in order to bring magic into the land and fend off the dragon attacks. The King and Queen offer for Esofi to marry the next in line, Princess Adale. Esofi accepts, but quickly finds that Adale does not want to rule or be in an arranged marriage. However, just as Adale and Esofi begin to feel something spark between them, Adale’s heartless twin cousins arrive to try and win Esofi’s hand as way to the crown.

Esofi and Adale have a realistic relationship and their story easily pulls you in as they slowly develop feelings for each other. I loved that they didn’t immediately fall in love or lust for each other, and at the same time they didn’t immediately hate each other. There are complex characters of very different backgrounds and this results in some disagreements that only served to strengthen the character development and plot.

The LGBT representation was amazing. Esofi describes herself as not having a preference for the gender of her future spouse. She says this is how most people experience attraction in this world. The idea of two women marrying each other is not looked down upon by those around them, except for doubt as whether they will be able to perform the magical spell to produce heirs to the throne.

There is a large pantheon of gods, one of which is Inthi, a deity that is referred to as neutroi. Anyone who is a part of Inthi’s temple is neutroi, a gender that exists outside the binary. There are a few side characters mentioned that are neutroi and go by they/them pronouns.

The side characters are just as interesting and complex as the main ones. Esofi has three ladies in waiting, Mireille, Lexandrie, and Lisette. Mireille is a sweetheart who wants everyone to be happy. Lexandrie is more concerned with what’s expected and considered the right thing to do. Lisette is not really a noble lady, but a bodyguard who is ready to protect Esofi with a variety of weapons. Each of them had distinct personalities and seeing Esofi talk with them was enjoyable. Adale has several scenes with her parents, and I liked that they didn’t make her parents perfectly good or horrendously evil. They are monarchs of a country, but also her mother and father. You can see that they are struggling to find the right path for both.

The world building was really well done and one of my favorite parts. Effie Calvin has created a complex world that is easy to understand as it interweaves with the plot. One of the main deities focused on is Talcia, the goddess of the moon, magic, and creator beasts. She is also the creator of dragons that plague Ieflaria.

Along with the world building, the politics was interesting. I’m the type of person that tends to be impatient to get the plot back to the love story, but in this case I was just as intrigued by the political situation surrounding who will rule Ieflaria, the threat her twin cousins pose, and the looming threat of dragon attacks.

The dragons were interesting and covered in mystery for the first part of the book. The reader learns more about them as the story continues. Admittedly I was a bit disappointed by the resolution to the dragons. However, the ending to the story as a whole was great and satisfying.

I highly recommend this book for anyone who loves the fantasy genre and wants to find some LGBT representation in it.