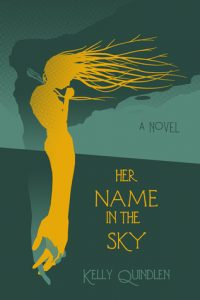 It’s her last year of high school and Hannah Eaden is just trying to finish up her senior year with a smile before she and her tight-knit group of friends scatter across the country to go to college. While she’ll miss her little sister and her goofy boyfriend, the shy nerd with the kind smile, and the non-stereotypical quarterback, the one she’ll miss most of all is her best friend Baker, senior class president and the apple of everyone’s eye. Baker understands her; knows her quirks, has a secret dedicated playlist for her on her phone, and gets the kind of milkshake she knows Hannah likes because that’s just the kind of friend she is. With Baker being as sweet as a button, how could Hannah help but fall for her?

If I’ve made you think this story is all sunshine and rainbows and Catholic school without all of the intense moral discourse, think again. Desire versus faith, fear versus love, this story does not shy away from the dark edges of what happens when a lifetime of internalized dogma grapples with feelings that ache with honesty. While there are moments of levity as readers get to know Hannah, Baker, and their close friends (the self-declared Six-Pack), be warned that there are many moments when Quindlen goes for the jugular with your feelings.

Late at night, after her parents and Joanie have already gone to sleep, she drives to City Park and sits in her car beneath the canopy of trees. She looks up at these trees and marvels at their existence, at how they just are what they were created to be, how they tower proudly on their wooden trunks, how they sway in the breeze and move their leaves like piano keys, and she prays that she can be like them, that she can innately grasp her existence and live it out without questioning.

She never receives an answer.

The story is told from Hannah’s perspective, and we follow with clutched pearls as her year goes from good to worse to awful to actually surprisingly okay. There are moments when the author has your eyes racing across the page, and the characters themselves are as believable as they are compelling. Kids do reckless things, and characters act out of fear in ways that make you want to shake them (as they are wont to). The story of a deep love for a best friend slipping seamlessly into something more is as natural and timeless as gay ladies themselves.

At its essence, this story is a familiar one (my running notes were filled with #relatable) so I feel like it’s really important to state this part outright: it’s going to be okay. This is not going to be another one of Those Stories, and while the adults in this story are as flawed as grown-ups in real life, they are also just as redeeming.

Her Name in the Sky deals with a lot of fear and what I’ve been told is a lot of Catholic Guilt. This book isn’t necessarily for the light-hearted. While the author does a good job of starting us out with a playful and loving friend group, there are some really heavy moments as senior year marches on and the specter of prom draws closer. We are dealing with homosexuality in a very religious context, and the author never lets us lose sight of the fact that these characters are desperate as they grapple with reconciling their earnest faith with their desires.

Overall, I would recommend this book if you’re in the mood for a cry with a happy ending. The author also has an active tumblr which includes links to HNITS fanfiction, fan art, adorable original one-shots, and a free preview of the first three chapters.