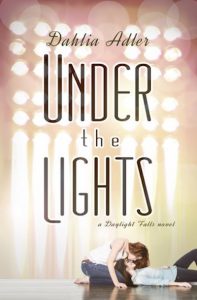 Under the Lights is a great light lesbian romance that’s about growing up and finding friends in unlikely places. There’s no deep trauma or life-or-death stakes here, and while there’s some light angst and the characters have real problems, the narrative never dwells on them too long or loses sight of the truth that the characters are pretty fortunate.

The story is told from the point of view of two coprotagonists, Josh Chester and Vanessa Park, both of whom are teenaged actors and minor celebrities in Hollywood. While they have a lot more money than most teenagers and some problems only celebrities do, the core conflicts are all about them figuring out what they want, notwithstanding what their parents want for them. It’s definitely YA and the sequel to a previous book of Adler’s, Daylight Falls, that features many of the same characters but different protagonists. You don’t need to have read it to read Under the Lights. (I still haven’t.)

The biggest reason I can see someone might not like this book is Josh Chester, so I’ll address him first. Josh is kind of a jerk. He intends to offend, for instance referring to Vanessa as “K-drama” for most of the book, insults everyone, and acts callous as hell. He tries to be unlikable, and I can see how some readers might find his voice to be such a turnoff that they wouldn’t be able to enjoy Vanessa’s. He’s funny, though, and his jerkiness more superficial than heartfelt. He doesn’t hurt people, and the girls he has no-strings-attached one-night stands with are every bit as interested in no-strings-attached sex with Josh Chester as he is in sex with them. I’m willing to forgive rudeness when it’s not coupled with malice, so Josh and his arc work for me.

Beyond that, I read enough lesbian romance that I’m tired of the formulas, and what I found refreshing about this novel is that it doesn’t follow them. How many lesbian romances have a het male coprotagonist who shares equal time with his female counterpart? The whole story is a beautifully-executed bait-and-switch playing on the structure of romance and YA romance in particular. In another book, Josh and Vanessa’s early relationship would be belligerent sexual tension. Because I’m reviewing this book for the Lesbrary, I’ve spoiled that part for you already: Josh and Vanessa do not end up together. You’d know the same if you read the blurb and know that “feelings unexpectedly evolve beyond friendship” means “gay.” None of the relationships in the book end up coming out the way the characters expect them to. I want more books like this.

Vanessa’s coming to terms with falling for a girl felt real to me. When she angsts, it’s less because of internalized homophobia and more because she loves acting and worries that being a double-minority in Hollywood will cost her her career and that it will give her parents another reason to dislike her. I’m long past the drama of coming out myself, but sadly I can still relate to feeling like a perpetual disappointment to one’s parents. Vanessa and her future girlfriend hurt each other some times with the all-too-accurate clumsiness of teenagers working out how relationships go.

The dialogue’s good enough to have made me laugh out loud several times when I was writing this review. I’d quote it here but outside of the context and the characters, it would lose its punch. The plot and development of the characters are well-structured and have interesting symmetry with some depth I didn’t notice on my first reading. Under the Lights is romance done well.

One Reply to “Cara reviews Under the Lights by Dahlia Adler”