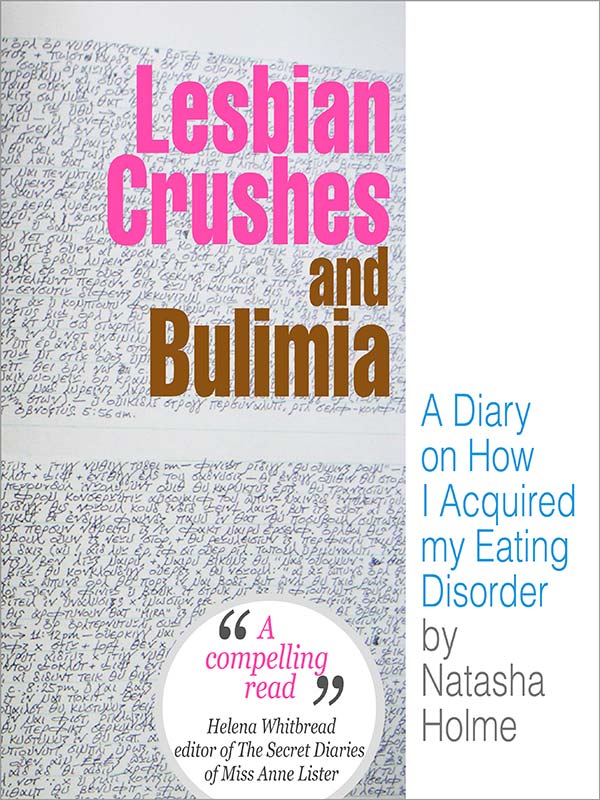 “Lesbian Crushes and Bulimia” is a year’s worth of diary entries that chronicle with terrifying frankness the author, Natasha Holme’s, first lesbian crushes and her descent into disordered eating.  The stark candor of the account paints a fascinating portrait of a person and a specific time in recent history.

The book, set in 1989, begins with the Natasha’s summer experience in Germany.  While it’s not specified, it seems that she’s doing some kind of service work with a group of other internationals.  She gets along with the rest of her team, and especially Alex, the other British girl in the group.  The two bond over their shared experience of intense crushes on former teachers.  As the summer goes on the two develop a very close friendship built partially on sexual subtext.  They both return home and attempt to continue their close relationship while also trying to define their sexualities.
When Natasha returns to school she explores the gay community while also attempting to figure out her sexual preferences through trial and error.  At the same time, her bond with Alex reaches obsessive proportions and when the two start to grow apart, Natasha’s obsession turns to her body and physical appearance.

I flew through this book in almost one sitting, an experience I wouldn’t necessarily recommend, but at a certain point, it’s almost impossible to turn away.  There are entries almost every day and as things progress, the author’s obsessions become painfully apparent.  Her descriptions of interactions with others are usually characterized by interrogation-like questioning about sexuality, physical appearance and judgments of character.  They’re uncomfortable questions, the gathering of evidence and reassurance.  And as things got worse and worse, I read to find out if anyone in this person’s world would find a way to break through to her, if anyone would be able to help her.  It was almost as if I read to keep her alive.

In 2013, the age of internet journals and pop culture obsessions, and a radically different understanding of eating disorders, homosexuality and adolescence, this is a fascinating book to read.  The parallels between this private diary and blogs as confessionals were very apparent and very uncomfortable.  I found lots of it really frightening and difficult and for some it’s probably very triggering, but at the same time it’s an important story.  It’s a record, both for the author and the rest of us, of how far we’ve come and how far we still have to go in creating safe and accepting environments.