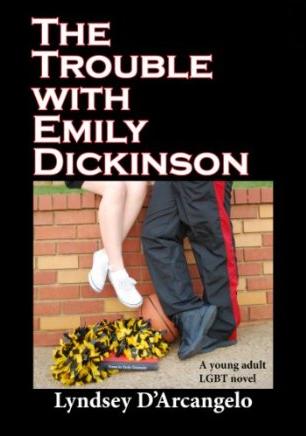 The Trouble with Emily Dickinson is a cute lesbian teen book with a few notable features. One is that the main character, JJ, has a lesbian best friend: Queenie. They are not into each other. They’re just super close. The other is that JJ’s love interest? Straight. Or is she?!

The point of view switches between Kendal and JJ (and Kyan, but we’ll get to that later). JJ is out, is on the basketball team, and is a poet (we’ll get to that later, too). She’s not exactly part of the in crowd, but she’s got friends and hobbies and pretty much has things figured out, except for a habit of always falling for straight girls. Kendal is a cheerleader. She is part of the in crowd, and she thought she had everything figured out until she got JJ as a tutor, teaching her Women’s Literature, and Emily Dickinson’s poetry in particular. Kendal realizes that the life she’s built around cheerleading, parties, and being popular may not be what she really wants for herself.

I think the highlights of The Trouble With Emily Dickinson are the characters and their relationships. JJ is relateable and well-rounded, and Kendal’s self-discovery is sympathetic, especially because it comes from a bit of a different place than most lesbian teen novels: it’s not really about what she is and always has been but has suppressed, but is instead about how she feels right now, and the kind of person she seeks to become. Their friendship/courtship is sweet, especially at the end. I also appreciated Mya the cheerleading captain’s portrayal later in the book. But Queenie really steals the show. Her parents are rich and she loathes them. She gets great grades without trying. She seduces girls, but doesn’t believe in commitment. She’s charming, especially in her interactions with JJ. They balance each other out, with Queenie being all bravado and cynicism, and JJ all stage fright and so sincere and optimistic it kind of hurts. At first I felt like Queenie was veering into just flat-out jerk territory, especially with her plan to disrupt her sister’s wedding by coming out in her speech, but she grows throughout the book.  The sequel focuses on her, so that definitely makes me want to pick it up.

I did have a few issues with the novel, however. The writing is mostly straightforward, nothing particularly noteworthy, though I did dislike a few things. One is that JJ has a bit of a drawn-out struggle with realizing that she likes Kendal. She’s out. She knows she’s gay. I refuse to believe she’d actually say out loud to herself “Why am I thinking about her?” A grey area is the poetry included. It’s absolutely believable as angsty high school poetry, but personally I didn’t find it particularly poignant, even for high school. JJ is described over and over as a writer and as talented, so I’m not sure if the poetry is supposed to be believable as high school poetry, or as genuinely moving poetry, but I wasn’t interested in them (and I still remember my high school poetry class and first year college poetry classes).

What most got to me, though, was the character of Kyan. His POV is shown a couple of times, and he just did not seem interesting or relevant enough to get that spot. Compared to the complex and interesting characters that comprise the rest of the novel (well, maybe not Christine), Kyan falls flat. He’s a jock/jerk type who gets what he wants, and stating in his first appearance in the novel that he has a “[l]ack of confidence, but he’d never admit that” just isn’t enough to humanize him. I thought his character was unnecessary to the story, especially as a POV character.

The Trouble with Emily Dickinson is a sweet teen lesbian love story, and I will definitely be reading the sequel, but I have a feeling that I will like The Education of Queenie McBride more than its predecessor.