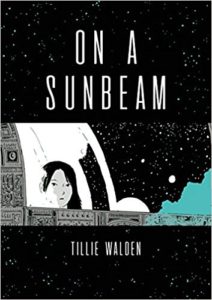 I’m writing this from inside of a curious space. About a week ago I stood up into a cabinet and gave myself a concussion, which I then immediately exacerbated by doing Chinese lion dance in four shows for a local production of The Nutcracker. So my life for a few days was cut harshly between periods of bright light and motion, and periods of sleep. Being awake has felt like one of those dreams where I’m just a little late to everything. Being asleep has felt like falling into a well. And then Winter Storm Diego hit my part of Virginia, and everything, everything stopped. My little house in the woods got fifteen inches of snow over as many hours, and since we’re a quarter of a mile from the closest paved road, gone was every possible excuse for getting up and doing things. In previous winters over the five years I’ve lived here, this is when I would read. I’d cover the available space in the tiny living room with quilts and pillows, hunker down with some snow snacks, and only get up to find another book.

But. Concussion. Trying to sit and read a novel proved…problematic. It’s been dreamlike and odd, the quick-slow jittery passage of time, the way that things don’t seem to stick right in my memory.

And then. Somehow, by chance, I found this lyrical, poetic, beautiful treasure-box of a graphic novel.

There are a lot of things to read in the world. I could do a review here every single day for months on end and not run out of my TBR list. That’s what I’m telling myself, when I’m asking how I never heard about On A Sunbeam until now, even though it started serializing as a webcomic a couple of years ago. Named for a Belle and Sebastian song, On A Sunbeam is set in a future so far from ours that its technology is more or less unrecognizable, though people are still more or less the same. It takes place after human expansion into deep space, and after–like a bacterial bloom dying back from lack of resources–the collapse of civilizations. People traveled so far into the dark that they weren’t able to come home again, and the most distant of them have sat for generations, just barely getting by. Barely daring to hope for rescue, because who would come for them? And there are some old colonies that don’t want any contact with anyone else, like the people of The Staircase, a settlement on the edge of known space mostly mentioned in legends and ghost stories.

But all of that, all of that seems very far away from the protagonist, a young girl named Mia. Her story is split raggedly between two timelines: the one where she’s a student at a boarding school-cum-space colony, and the one a few years later where she works with a team of antiquity restorers/maybe something more to mend abandoned colonies and architecture that has long since fallen into ruin. It’s an interesting juxtaposition; the story is pulled like a rope between this girl with great potential and very few aspirations, stumbling through life, causing trouble, and the older, quieter version of herself who spends her days cleaning up after the consequences of others’ centuries-old mistakes.

The first three quarters of the comic are colored largely in shades of Payne’s Grey and in oranges. I thought at first that this was just a pretty sort of contrast in the minimalist style so popular to indie comics and webcomics these days, but about halfway through, I remembered all at once those distant high school lessons about redshift and the Doppler Effect, how speed and distance turn what you see from red to blue. The past looks different than it really is. The future can’t be seen clearly, even if we think we’re sure what is going to happen. And like the narrative, we’re pulled taut between those two points, looking forward and back but pinned to the inescapable Now.

The line weight and panel structure reminded me a lot of the early days of Hayao Miyazaki’s 1980’s Nausicaa manga. On A Sunbeam has the same sort of dreamlight vagueness to some of its figures and landscapes, a knobbly intricacy to its plants and architecture. Even the edges of the panels waver, mirage-like. Things swim into focus and out as if with the attention of the protagonist, and scenes that in a more action-oriented comic might be very close to the viewer are instead distant and hazy as with memory, as much concerned with the landscape as with the characters living in it. Because you never can clearly remember everything about your first love, can you? Even if you write it down event by event, there are always going to be things that dissolve into the dim red past. You can’t hold tightly enough to ensure that nothing escapes.

The characters have complicated relationships and love each other deeply, but all the same every one of them has stories they don’t tell the others. Every time you describe something, scientists say these days, you’re changing your memory of it. It might be that to preserve something flawlessly, it must never be spoken aloud. Or maybe it’s just about self-protection, because if you like the way she looks at you right now, why damage that fragile connection by showing her the darkest places you’ve had to walk? But, as everything has a flipside, if you don’t share anything, if you’re never truly seen, can you be sure they love you?

This review is not purposefully vague. I could give you a cold recital of events, chapter by chapter, but that would be as lifeless as a sparrow dissection, and this work deserves much better treatment than that. It has a dream’s motion to it, inexorable but winding. There’s nothing extra, nothing that could be cut away, but it doesn’t feel spare or thin. The world is never explained with any clarity (why do the spaceships all look like koi, and how do they travel so quickly? Why isn’t there a single male character? What’s the political power structure of the human universe?) and simultaneously, it’s not necessary. This is a love story, and a story about finding family in unexpected places, and it’s enough to know that all the science and history exists at all in the world. We don’t need to see it, because it’s not what we’re focusing on.

As I read, I kept being reminded of a sonnet I memorized a decade ago, Against Entropy by Mike Ford. There’s a bit in it that goes:

The universe winds down. That’s how it’s made.
But memory is everything to lose;
although some of the colors have to fade,
do not believe you’ll get the chance to choose.

Final rating: Five out of five stars. I’m buying multiple copies to give as Christmas presents, because this is the most enjoyable graphic novel I’ve read all year.