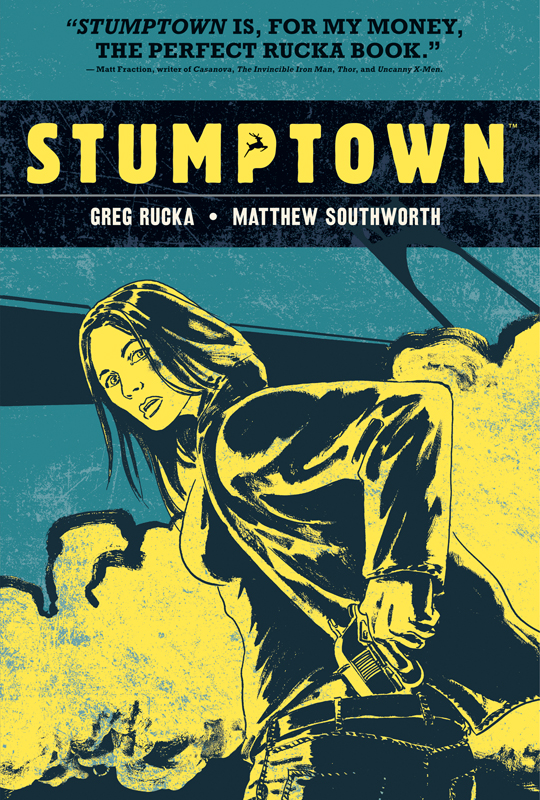 Dex Parios may be a down-on-her-luck gambler who has put a few too many dollars on the house tab, but she is a talented investigator – and it’s those investigative skills that will get her out of debt, and, unfortunately, into trouble. The volume one of the graphic novel Stumptown, written by Greg Rucka (Gotham Central, Queen & Country) and illustrated by Matthew Southworth (Ares, Infinity, Inc.) is a modern noir taking place in familiar Portland, Oregon – but instead of the whimsical Portland we may be familiar with from IFC series Portlandia, this is a grimmer place filled with real people, not caricatures, more reminiscent of The Killing than “Put a Bird on It.”

When Parios’ debt is called at the Wind Coast, head of operations Sue-Lynne hires Dex to find her missing granddaughter who appears to have left in a hurry, taking just about every important thing she owns but her car. While on Charlotte’s trail, Dex stumbles onto the dark crime underbelly of Portland, a mystery that may end up getting Dex herself killed in the crossfire.

Stumptown is drawn in blues and yellows, with realistic figures and pacing. Those familiar with Rucka’s writing know he is no stranger to the competent-yet-full-fleshed-and-flawed female lead. Parios is no exception. She also happens to be bisexual. There is no underestimating the importance, for me, to be placed on lesbian and bisexual characters in mainstream media. These are stories not necessarily marketed only to us, but giving our stories (as humans who lead full lives, a portion of which involve sexual and emotional attraction to those of our same gender and sex) to an audience that may have them before.

With the release of Stumptown’s second volume just around the corner, I considered this an apt time to recommend the first volume, and Rucka’s work in general. Greg Rucka is one of the few male authors I trust to write not only lesbian and bisexual characters but true feminist narratives. His previous gay-relevant awards are the 2004 Harvey Award for Gotham Central (in which Renee Montoya, Gotham Latina cop and lesbian is outed by a co-worker, and the 2010 GLAAD Media Award for Detective Comics introduction of Batwoman Kate Kane, veteran, Jew, and lesbian.

For those not familiar with the DC Comics universe, Stumptown – which features neither superheroes nor super powers – is a great introduction to graphic novels and to Rucka’s work. For those wanting a great way to ease into the world of Batman and capes, Gotham Central works much like a procedural that just happens to exist in a world where the weekly villains sometimes fly.