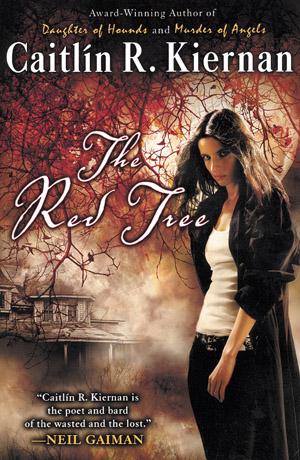 For October, in honor of Halloween, I’ve been picking up some appropriate books. This one I was especially excited about, because there aren’t a lot of lesbian horror books. Besides, the premise really appealed to me. Here, I’ll just paste part of the the blurb.

Sarah Crowe left Atlanta, and the remnants of a tumultuous relationship, to live alone in an old house in rural Rhode Island. Within its walls she discovers an unfinished manuscript written by the house’s former tenant-a parapsychologist obsessed with the ancient oak growing on a desolate corner of the property.

I love lesbians and book and any combination therein, so a lesbian book about a book (the manuscript)? I’m in! I was a little worried, partly because the blurb doesn’t mention it, that the lesbian content would be more of a one-off line about her ex-girlfriend. I was totally wrong, however, and part of what I enjoyed about The Red Tree were things like Sarah lamenting that with her luck, her new neighbor would be straight. (Woe!) And it was just as literary as I was hoping: Sarah is an author, and the book is mostly comprised of her journal entries. There is also a fictional editor’s preface, explaining the context of the entries (namely, Sarah’s subsequent suicide), and included within the entries are lengthy excerpts from the manuscript Sarah discovers, as well as a short story of hers. The whole thing is fiction within fiction, so in those aspects it was exactly what I was looking for.

In fact, I spent the whole first half of the book wanting to thrust it into people’s hands and say “This! This is what you want to read in October!” It was just the right kind of creepy and atmospheric. Slow-moving, not grisly, just unsettling and compelling. Also, I loved Sarah as a character, though you might disagree. She’s sometimes rude and sarcastic, and generally caustic, but believably so. She’s also self-deprecating, so she doesn’t spare anyone. I found it quite funny and times, and definitely a well-rounded, memorable character.

As for the plot, most of it is just setting up the story, establishing the mood, slowly heightening the creepy factor. The manuscript excerpts fill you in on more and more of the bloody back story of the property, and that tree in particular. As I’ve said, it’s precisely the kind of understated creepiness that I’m looking for in a Halloween read. It is almost 400 pages long, however, and I felt like around the middle or three-quarter mark, it began to lag a little. Still, rounding on the end of the book I was glued to my seat to finish the last fifty pages, wondering how she was going to wrap this up. Unfortunately, I felt disappointed.

[spoilers, highlight to read] I’m not usually one to see the end of stories coming: I tend not to look to critically at the clues in the story until I see them in hindsight. I don’t usually read mysteries partly because I get lost and can’t figure out what’s happenings. But I saw this ending coming a mile away and was really hoping that I would be wrong. I just feel like it’s the most common trick in the book for creepy stories. And because I saw that coming, it wasn’t nearly enough of a shocker to be the final reveal, to me. I expected there to be something else in addition to that, at least, but that was the whole punchline. It really dragged down the book for me. Where I would have rated it maybe 5/5 for a great ending, it now feels more like a 3.5/5. Alas. But the other rating on this book on Amazon and Goodreads seem almost all positive, so that may just be me. [end spoilers]

Overall, I think I would still recommend this one for a creepy read, but I would warn against expecting a stupendous ending, or expecting much of a resolution. I still enjoyed most of this book a lot.

Edited to add: I should note that I wrote this review immediately after finishing the book. Reading some other reviews, I realize that I misunderstood the ending, at least in part. I still feel disappointed, but not to the same degree… I may feel differently about this book after some time to think about it.