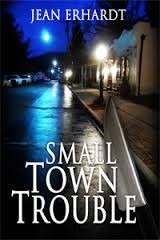 Jean Erhardt’s Small Town Trouble is the first in a series of mysteries that features the somewhat reluctant detective Kim Claypoole. As the action begins, we find Kim returning to the small Ohio town of her youth to advise her mother on a potentially shady real estate deal. Behind her, she leaves a successful restaurant, which she runs with her best friend; her double-wide trailer; and the married and closeted Martha Stewart-esque hostess with whom she is currently involved, Nancy Merit.

Kim’s mother Evelyn has always had a “spend first, ask questions never” mentality, which has gotten her into financial difficulties. Evelyn’s remaining assets include a palatial estate and her dead husband’s unprofitable country radio station, which a mysterious benefactor has recently offered to purchase for $250,000. Kim arrives to counsel her mother and discovers that the proprietor of the town’s topless bar has been murdered and that the person offering to buy the radio station is also interested in the family farm of her junior high kissing partner, Amy.

Curious against her will, and faced with an increasing number of odd occurrences, Kim tries to put the pieces together while juggling her mother, the married Amy’s rekindled interest, her disgruntled restaurant partner, and her relationship with Nancy. With Amy playing George to her Nancy Drew, Kim pokes around and gets more trouble than she bargained for, putting her life in danger to uncover the secrets of Fogerty, Ohio.

Erhardt has a dry, tongue-in-cheek delivery that makes Small Town Trouble a lot of fun to read. For example, when Kim has resolutely decided to ignore her concerns and have her mother take the money and run, a small voice that sounds “a lot like Jessica Fletcher” prods her to keep investigating. I appreciated Kim’s cultural references and her dogged approach, even though her judgment in her personal life is clearly questionable. Kim’s history shares several details with Erhardt’s bio, and I would be interested in reading the next book to see where Kim goes from here. I expect that Erhardt’s experience as a private investigator will provide her with a lot of fodder for both comedy and tragedy.