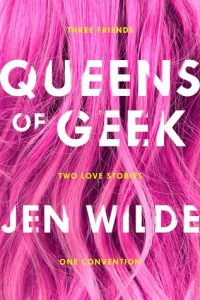 SupaCon is the place to be for all things nerd culture, and this year, Charlie, Taylor, and Jaime are going. Charlie, a vlogger recently-turned-movie star, is going to promote her new movie. Taylor and Jamie, her best friends, are just coming along for the ride. While there, Charlie must deal with an ever-present ex, as well as a flirtation with her long-time vlog crush, Alyssa Huntington. Meanwhile, Taylor is forced to face her fear of change, both in regards to her future, and to her friendship with Jamie.

I have a hard time calling books “perfect”. I’m an editor, so every book I read I come at it from an editorial perspective. What could I have done with a red pen to improve this book? In the case of Queens of Geek, though, the answer is “not much.” This book is as close to a perfect book as I can imagine. The story is interesting, the characters are engaging and unique, and it actually managed to make me care about the straight couple in a YA book for the first time in years.

Charlie and Alyssa’s relationship is absolutely incredible. They are both popular in their own right, and each a fan of the other, which makes for a very interesting dynamic. Both have also struggled due to past relationship, but the way that this is dealt with is so beautiful and mature. Their scenes together are tender, hilarious, and sexy. As soon as I finished the book, I wanted to instantly pick it back up so that I could read them falling in love all over again. Plus, it’s always amazing to read interracial relationships where neither party is white.

Taylor and Jamie have the type of friends-to-lovers romance that feels straight out of a fanfiction, in the best way possible. Jamie is one of the kindest, most supportive friends I have ever encountered in fiction. Everything he does, he does to ensure that Taylor is safe and comfortable, especially since simply being at SupaCon means stepping outside of every single one of her comfort zones. He is the opposite of every hypermasculine, emotionally constipated male love interest that I’ve ever been forced to endure in YA. In fact, Jen Wilde goes out of her way to show how destructive that character can be, by having Charlie’s ex embody all the characteristics of a typical YA male love interest, and showing very clearly that this is not the person you want to end up with.

Taylor in and of herself is an incredible character. She’s autistic, and overweight, but neither are things she is looking to change or overcome. For her, it’s more about opening herself up to new opportunities instead of letting her anxiety control her. She is fat-shamed at one point in the novel, and it makes her feel terrible, but she is fully aware that it is the other girl’s fault if she wishes to judge Taylor based on her weight, not Taylor’s. She also shows incredible pride in her autism, being incredibly excited to find a comic written by an autistic author about an autistic superhero. Her journey over just two days is amazing to experience, especially since her story doesn’t exclusively revolve around whether or not she will get with Jamie.

The only things I would change about this novel would be the timeframe, as two days seems quite short for so much to happen, and Taylor’s Tumblr posts. Not because they are bad, but because, as a user of the platform, I found them unrealistic. First of all, Taylor seems to exclusively use Tumblr mobile, and several times throughout the convention she pulls her phone out and writes posts as long as this review on the spot and posts them from her phone. This is just unrealistic. As well, she uses tags the way that they are used on twitter, with all the words together as one long word, which is unnecessary on Tumblr.

I don’t know if this is something people may be concerned about, so just in case I want to issue this warning: there is an undisclosed age difference between eighteen-year-old Charlie and Alyssa. We are not told exactly how old Alyssa is, only that she attended several years of college, after which she dropped out and went into the entertainment business full-time. It’s uncertain how long she has been in the entertainment business, but we are lead to believe it is at least a year or two, which would put her at twenty-two or higher. The relationship doesn’t feel icky, or like there is an unbalanced power dynamic, but I figured I should warn for this in case anybody may want to read this book, but is uncomfortable with that type of age difference.

Overall, I think this is a book that I would recommend to almost everybody in my life. It’s well-written, it’s engaging, and it has an incredible cast of characters that you will absolutely fall in love with. If you have a chance, pick it up! You won’t be disappointed.