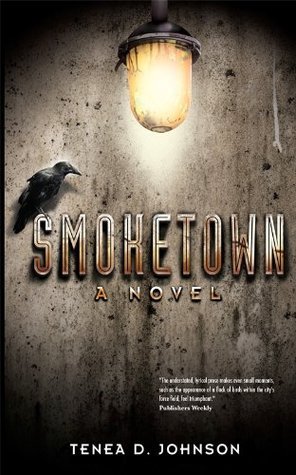 I was intrigued by the first sentences of Smoketown:

Anna Armour had had her fair share of failed resurrections. There had been the lichen when she was three and the dragonfly at six–the sad twisted platypus that her mother took away before it ruined her tenth birthday. Since the day of her mother’s death when Anna was fourteen, she hadn’t brought anything back to life.

This is a book that plays with genre. I picked it up expected a dystopian novel, which it kind of is: it takes place in a post-global-warming world, but that’s only part of the story. At times, this felt more like a series of interlocking short stories than a novel. Smoketown is only 197 pages, and it bounces between three points of view (Anna; Eugenio, a researcher of the Crumble; and Rory, who has been living in isolation ever since the disease spread). Each has their own backstory and motivation, and between that and the complex setting, it began to feel a little crowded.

Anna lives in Leiodare, a city which survived the epidemic called the “Crumble” decades ago, and reacted by banning birds from within the city. Already this is more at work that I expect from a dystopia, and that’s ignoring the magical element of Anna’s abilities.  The setting is remarkable, though. In addition to this description of the post-climate change landscape, it also describes new technology and religion, with enough slang to seem realistic but not distracting. The detail that goes into the consequences of these changes was impressive. For instance, the outlawing of birds leads to ongoing infestations of insects, and human callers are hired to imitate birdsong after the silence becomes overwhelming.

I also found Anna’s storyline fascinating, especially her mysterious relationship with Peru and her budding romance with Seife. The idea of her powers was also compelling, but I would have liked more of this element to the story. The actual plotline, and Eugenio and Rory’s contribution to it, I found less interesting. The mystery aspect seemed fairly straightforward, and I found Rory especially to not be a necessary POV character.

It’s a shame that the plot didn’t pique my interest, because I loved the setting, and I would really like to see another story set there, or even just more from Anna.

One Reply to “Danika reviews Smoketown by Tenea D. Johnson”