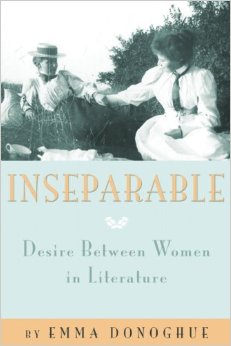 I don’t think I can properly express how much I adored this book. As I was reading it, I wrote down the page numbers where there were quotes I wanted to post on my LesLit tumblr, as well as books I wanted to add to my TBR list, and thoughts/comments I had. Typically when I do this, I end up with half a page of notes. This time, I ended up with 5 full pages.

When I posted a quote on tumblr, I suggested the subtitle of Inseparable should be Or: How All the Authors You’ve Ever Heard of Wrote Lesbian Love Stories and No One Told You and I stick by that. Ovid? Shakespeare? Apparently every author who was anyone wrote lesbian love stories and I was somehow not aware of it. We are taught that lesbian literary history begins with Radclyffe Hall, with Sappho a distant anomaly. That’s not true at all. Desire between women has always existed, and it’s been written about throughout time. It’s just that somehow our history has been hidden from us.

Emma Donoghue excavates this masterfully. The breadth of works covered is astonishing, and it clearly took a huge amount of work. There are even passages in the novel that Donoghue translated from the French herself! And it is meticulously arranged. The book is divided into sections: Travesties (cross-dressing), Inseparables, Rivals, Monsters, Detection, and Out. Some are brief, and some have subsections of their own (the cross-dressing section is the most detailed), but it flows together very organically.

Inseparable is a fantastic academic resource for les/bi/etc literature, but it’s not written in an academic voice. It’s extremely easy to read. If you’re looking for a casual read, there are no footnotes to distract you, but if you want to go more in depth, the notes at the end are packed full of information (they note the page they are referring to), as well as gems like this note, referencing the introduction to the book: “In the ongoing controversy known as essentialism vs social constructionism, both extremes seem to me to verge on silliness (“Joan of Arc was a dyke” vs “lesbianism was invented in the late nineteenth century).”

I can’t recommend this book highly enough. If you like les/bi/etc literature (and why else would you be here?), check Inseparable out! You’ll be amazed at the explicit f/f romances in literature going back more than a thousand years! And it will give you plenty of ideas for more lesbian books to find. This is definitely now my favourite nonfiction book, and one of my general top five!

3 Replies to “Danika reviews Inseparable: Desire Between Women in Literature by Emma Donoghue”