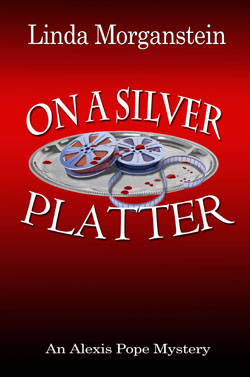 I have never written a review about a DNF “Did Not Finish,” but after two months of trying to get through this particular title, I thought I would reflect on why I couldn’t make it.

Alexis “Call me Alex” Pope is acting as a stunt woman on the set of On A Silver Platter, the “tale of alien invasion based roughly on the beheading of St. John the Baptist” (12). On a sound set plagued by an overreaching script, a pompous director and no-nonsense producer, plus a stalker, the only thing that could make things more complicated would be a murder. Add to this a flirtation with a committed woman and a blind date with another, plus sudden stardom as Wonder Woman in a kinky lingerie fashion show, and Alex has more than enough on her platter.

All of this action occurs within the first hundred pages. Unfortunately, I could not get any farther than that. This book seems to go off on so many different tangents, I was not sure if I was reading a murder mystery, a lesbian romance, or some sort of fanfic for Lynda Carter (not that I don’t love the woman myself). The scenes are descriptive and decently written, but the story is so overwrought with multiple characters who have little relation to the main plot, assuming that would be the murder of one of the movie’s stars. I lost interest in what Alex might do, either in her short stunt career or as the ameteur sleuth, extremely quickly.

The set up of the book’s style is similar to Ellen Hart’s Jane Lawless books: a list of the “cast of characters” in the beginning of the book, a woman pulled into a mystery by a secondary involvement, who was introspective in terms of her self and surroundings. So, I was hoping for a similar nuanced style from Morganstein, but I feel like I know little about Alex or the reasons behind her actions. Nor could I really manage enough feelings for the book, beyond confusion, to really care. On A Silver Platter is the third book of this series, so maybe I will hop back to Ordinary Furies and see where Alex started.