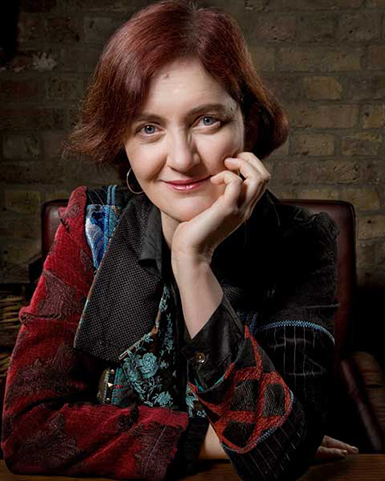 I just finished reading Inseparable by Emma Donoghue (review to be posted tomorrow), and I had the opportunity to interview the author herself about it!

Q: I was coming into Inseparable expecting ambiguous relationships that we could project romantic or sexual feelings on, but I was surprised at the explicit female/female desire stories in literature stretching back to Ovid! I’ve been searching out lesbian literature for years and hadn’t heard about the vast majority of these stories. Why do you think our conception of lesbian (or female/female) literature tends to skip straight from Sappho to Radclyffe Hall?

A: I agree, it’s very odd. Partly the fault, I suspect, of modern academics who actually prefer to have to dig out hints and ambiguities, rather than tackling a right-there-in-your-face same sex plot! But mostly the fault of consistent homophobia (or, more precisely, a willful blindness to the lesbian theme) on the part of pre-twentieth-century guardians of literary tradition.

You discuss how lesbians in the past have been left unnamed in literature and law. Why do you think this is?

Often those discussing desire between women (either in reality or in fiction) have not been deeply troubled by such desire as such; what bothered them was the notion that it might set such women apart, give them an identity, make them unavailable to men. So if they were left unnamed, they weren’t so troubling.

You covered a huge amount of material in Inseparable, but it a slim book and organized pretty strictly. Did you find it difficult to keep it so short? Is there anything you would like to have gone into more depth with?

Oh yes, I wrestled with the material for a long time; my cross-dressing chapters, in particular, could have been a book on their own. (I had a science-fiction/fantasy chapter which I was actually quite relieved to cut, because it turned out that so much lesbian sci-fi sets my teeth on edge.) I wasn’t sure whether the book would suit academic or trade publication. When INSEPARABLE finally found a publisher at Knopf, my editor Vicky Wilson was wonderfully ruthless: she made me reshape it to the general reader, cutting multiple examples, debate with other literary critics, and anything that sounded too academic. On the plus side, she encouraged me to add lots more pictures! I think she was quite right, given that lesbian literary history/criticism has got so much more specialised and theoretical in the last ten years; the way I write is much more suited to a non-academic readership. (But I was determined to give the book full notes at the back so it could be useful to scholars too.)

I have heard that this book took you a long time to write. Was it the writing, or the gathering of the material? How did you root out the more obscure texts?

It was partly the editorial process I’ve described – the endless cutting, boiling it down to the gist. But it was mostly the research, done a couple of months year for many years, very much as a side-project to my fictional work. There’s no quick way to read so many (often vastly long) primary texts. I had to read dozens of Renaissance plays just to be able to compose a single paragraph that summarised their variations on the female-bridegroom plot. Trying to skim the seventeeenth-century epic of AMADIS DE GAULE in French, in particular, nearly killed me.

Lesbian pulp fiction gets a brief overview in Inseparable. Are there any laugh-out-loud bad ones you’d recommend?

I decided to devote more attention to pre-twentieth-century works because they get so much less attention in other books on lesbian literature (which tend to start with Radclyffe Hall). But I’m glad I at least got to mention pulp. My favourites are the Beebo Brinker ones – laugh-out-loud-bad and great, too, in their peculiar way.

What was the most surprising thing you found in your research?

Hm. Actually, I think it was the centrality of lesbian themes to the tradition of detective fiction, from its beginnings.

Do you plan on writing more lesbian nonfiction?

No specific plans, but I’m very open to it. My fiction and plays are more an expression of myself, I suppose, but I treasure the quieter, more humble-monkish contributions I can make to ‘finding the lesbians’ in our cultural history.

I am honored to be able to interview Emma Donoghue, one of my absolute favourite authors! I highly recommend Inseparable, and I’ll post a review tomorrow.

4 Replies to “Interview with Emma Donoghue”