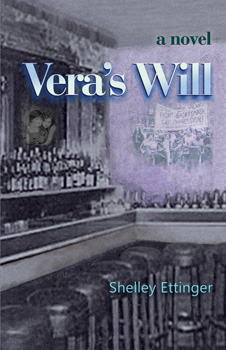 Vera’s Will is a beautifully-told queer family saga, one that is by turns heart-wrenching and heartwarming, and at every moment an entrancing read. Ettinger tells the tragic story of Vera’s life, from her family’s flight from Russia after anti-Jewish violence at the turn of the 20th century to her lonely death in the 1970s, with many family tragedies and missed opportunities for love in between. Interspersed with the chapters detailing Vera’s solitary and repressed life are brief sections told from the point of view of Randy, Vera’s granddaughter, as she learns about her family’s past and makes her own way in the world. Both women are lesbians, but their lived experiences vary wildly.
The two mirrored narratives showcase two vastly different time periods. One woman lives a loveless and unhappy life, unable to live as her true self, while the other is able to live her life freely as a lesbian, overcoming the hardships she encounters along the way thanks to her own sense of self and her certainty in her own identity and values. Randy lives Vera’s “what could have been,” gay liberation come to a boil after decades of repression and unhappiness.

Ettinger deftly interweaves social critique into her narrative: she touches upon homophobia, racism, sexism, worker’s rights, and more, without the story ever feeling forced or preachy. Instead these issues come up naturally, and add to the richness and depth of the story as Ettinger faces them head-on in the novel’s plot.

A well-written cast of secondary characters (both lovable and loathsome) also enriches and deepens the story, making it feel all the more epic and engrossing.

The story is intricate and delicately balanced between the two narratives, but despite Ettinger’s skill, some plot points are left hanging. Randy’s Aunt Bud is an intriguing character whose backstory is never fully explained, and who seemingly exists only to further the plot. Aunt Bud brought Randy to her first gay bar as a child – where Randy narrowly misses crossing paths with Vera, in a strange lesbian convergence. Aunt Bud herself seems to be a lesbian, but Ettinger glosses over her narrative potential and uses her character rather clumsily. This minor flaw in the novel stands out only because the rest of the novel’s characters are so well-written: this one puzzling element does not detract from the rest of the book.

Vera and Randy’s stories in counterpoint to one another make for a beautifully bittersweet novel, one that is both melancholy and heartening – the best bits of both emotions. It’s the kind of novel you want to read in one fell swoop, despite its length: Ettinger meticulously lays bare Vera’s entire life, taking the reader on an emotional rollercoaster that is simultaneously heightened and soothed by Randy’s confrontation with her family’s past and journey of self-discovery and acceptance.

The story provokes that perfect combination of emotion and introspection. I loved Vera’s Will for its epic, multigenerational take on the lesbian coming of age story – it filled a void in queer fiction that I didn’t even know I needed, and left me hungry for more queer sagas of such far-reaching proportions.
[Trigger warning for descriptions of rape and violence.]