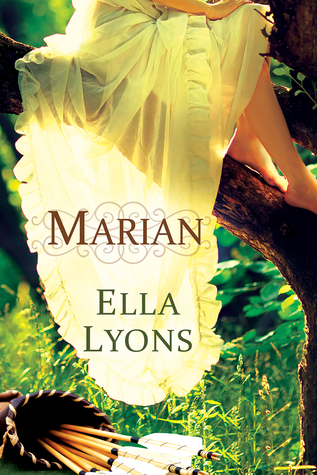 One way to describe Marian by Ella Lyons is that it’s a kiddie version of Heather Rose Jones’s Daughter of Mystery — both are costume dramas featuring a traditionally feminine lesbian with a nurturing personality and a lesbian swordfighter living in a world where it’s not customary for women to participate in combat, both feature father figures who a main character is both attached to and in opposition to, and both feature court intrigue — just to name a few similarities. So if you like the Alpennia books, rejoice because now there’s a young adult novel with a similar flavor.

The pitch for Marian is that it’s a f/f Robin Hood retelling, but I feel that does the book a disservice. The actual story is entirely new and original, only using the Robin Hood names as a springboard and small elements of the legend as landmarks that pop up in unexpected places. What we get is Marian, a teenaged girl who moves to the “big city” (for medieval, rural definitions of big) when her knighted father starts to rise in political power. She’s a bit of a fish out of water and bewildered about how to deal with snobby noblewomen and the king noticing her beauty, and the only person she feels truly comfortable around is the farm girl Robin. They eventually get separated by fate but come together again once Marian is eighteen and the stakes are higher.

I really enjoy when I can feel the chemistry between characters who are an endgame romance, and Marian delivers there, mostly because of dialogue between Marian and Robin that felt lifelike and natural to me (other than the repeated use of ‘cracking’ as a slang term by too many characters in too short of a span of pages, although that might just be my American-ness showing–forgive me.) I liked how subtle the girls’ connection is–it almost made me feel like I was just a femslash fan rather than someone purposely reading a f/f novel, which made the inevitable “it’s canon” scene even more satisfying. In other words if you are one of those people who wanted Anne Shirley and Diana Blythe or Jane Eyre and Helen Burns to be in love, this book will put you back in that place and then give you what you want.

I thought it was really good writing that the author establishes Marian — and her father and their changing life situations — as a fully rounded character before ever introducing Robin as a love interest. By the time Robin shows up I was totally invested in Marian and her hopes and her traumas. Incidentally, I was puzzled as to why there was a pound and a half of foreshadowing about everyone in town coming down with fever but then Marian’s father’s died a different way.

I never noticed Little John and King John having the same name before because the original legend doesn’t really make it relevant. But in this story, they interact and are in the same scene enough times that I noticed and I wanted to say that it was neat to see that in historical fiction of any kind–two people with the same common name. One doesn’t often run into that in fiction for the obvious reason that it might confuse the reader, but I think it’s neat because it’s super realistic.

A quote I liked, discussing the villain of the piece — King John, of course:

“His Majesty is always paying attention to you.”

“His Majesty is always paying attention to himself.”

To be honest the reason I’m giving this four stars instead of five is that I feel like the romantic resolution was a bit abrupt. I feel like the book’s climax was the climax of Marian’s story rather than the climax of the Marian/Robin romance. Also, there’s a moment when Marian assumes some bottles which could have been a lot of very scary things are the medicine she needs for someone, and she’s right, and that part made me smirk a little.

But other than that, it’s a totally captivating read with a well-rounded cast and evocative scenes, and definitely worth checking out.

Trigger warning for attempted but foiled sexual assault — another similarity with Daughter of Mystery, actually.