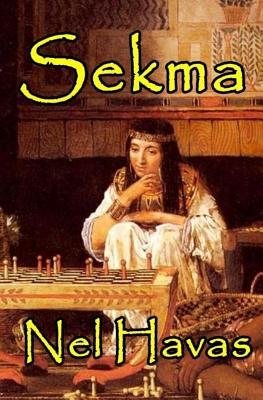 Back in December, I reviewed The Apprentice Queen by Nel Havas. Recently, the author contacted me about her new companion book to that novel: Sekma. (I say “companion” because this book can be read before, after, or independently from The Apprentice Queen, but they are linked.)

Sekma is a character that fascinated me in The Apprentice Queen, so I was intrigued by the idea of a book with her back story. In this novel, we see her as a young woman, at the beginning of her rise to power. If I expected to see her transformation into the cold, ruthless woman we meet in The Apprentice Queen, I was mistaken. Sekma as a young woman is just as manipulative, power-hungry, and unfeeling as she is as an aging queen. She just has fewer resources accrued.

Although this is Sekma’s story, it’s not from her point of view. It’s from the perspective of Neferkara, a woman who was once nobility, but was enslaved when Egyptians invaded. Now she serves Sekma in Egypt, seething with rage at the king who ordered the invasion–and the entire country by extension. There are definitely parallels between the protagonists in the two books: both are fish out of water, though Mitti is raised up from a commoner’s lifestyle to a noble’s, while Neferkara tumbles in status. Both work closely with Sekma–against their wills–and grow to grudgingly respect her skill while being horrified by her personality.

I found Sekma to be just as compelling in this narrative. She is calculating and cold–not cruel, because that would imply more passion than she possesses–but captivating. This background on Sekma doesn’t make her more sympathetic per se, but it does provide more perspective. We see how she built her network and resources from very little, and the trajectory of how her scheming became so sophisticated later in her political life. More than her capability, it’s her motivation that makes me pause to reconsider my opinion.

Sekma is unflinching in destroying anyone who stands in her way, whether they are guilty, a potential threat, or inconvenient bystanders, but everything she does genuinely benefits the kingdom (at least in her eyes). She seeks power, but she really is the most capable person to wield it. We see how infighting and pride started wars and sabotaged progress in Egypt previously. No one close to the throne is as good with organization and management or diplomatic relations. Without her seizing control of Egypt, it really seems like the kingdom would be worse off, right down to the common people. Although Sekma is apathetic to their personal well being, the average person seems to be better off under her leadership than her competitors. I found this aspect to be really thought-provoking, and ended up fueling lengthy conversations between my partner and me.

Because Sekma takes center stage in this story, I found that although Neferkara is the main character, she’s often hardly noticeable: just providing the eyes to see Sekma through. Her story line gets less attention. This also means that although there is queer content in the book, it is definitely not the focus. Neferkara befriends another slave who later becomes her lover. Meritaten teaches her to find happiness even in her new, bleak life. It is sweet, but fair warning: this isn’t a romance, so there’s no guaranteed happily ever after.

It’s interesting to see how the two books slot together. There’s enough kept under wraps that you can read this before The Apprentice Queen and not be spoiled, but reading them the other way around reveals how some of the events and reveals came to be, including unforeseen consequences of Neferkara’s actions.

I was impressed with the attention to detail in the setting. I don’t know enough about ancient Egypt to say definitively that it’s accurate, but it certainly appears to be well-researched. The writing is serviceable, and seems a little cleaner than her earlier book, including fewer time jumps. Foreshadowing is used liberally, but it worked for me and kept the tension during slower sections. On reflection, however, I’m not sure that the plot hangs together without context. It was interesting as a deeper exploration of an interesting character from the first novel, but I’m not sure it has a strong arc of its own. The Apprentice Queen seemed to be clearly about how someone can become a monster, which was an interesting psychological premise. I didn’t have a central theme pop out at me in the same way in this volume, except maybe examining what makes a villain and questioning whether Sekma can be both monstrous and necessary? It felt a little more muddied to me.

That’s a minor point, however. I enjoyed learning more about Sekma, and I liked the journey Neferkara goes on. I feel like this is a stronger read as a follow-up to The Apprentice Queen, but that could be my own personal bias. I do recommend both books if you’re interested in the premise!

(Warning: don’t read the Amazon synopsis for Sekma! It gives away most of the plot.)