Carly Schiller is finally away from her abusive family, but her freshman year at Gorman isn’t going that well either. She befriends and starts to fall for her roommate Allison Hadley and becomes close with Allison’s childhood friend Wes. But when Allison is sexually assaulted at a party and Carly insists on bringing her friend to the hospital and then taking the issue to the school, a rift begins to tear them apart. No one is treating Allison’s situation as she thinks they should, and as tensions rise, it all ends in tragedy.

Scarlett Clark is an English professor at Gorman with an unexpected pastime — murder. Scarlett finds wrongdoers, rapists and all-around creeps to target and bring to justice the way the justice system should have but failed to do. But her most recent kill brings the authorities too close, and she’s found out by her colleague, Dr. Mina Pierce, her victim’s ex-wife. It doesn’t help that there’s a palpable connection between her and Mina.

Almost all the men throughout the book represent the worst of toxic masculinity and the patriarchy, so it’s easy to sympathize with Carly and Scarlett as they begin to lose control. The blatant perpetuation of rape culture from authority figures who should be protecting them is infuriating. Wes turns out to be a Nice Guy™, showcasing one of the more sinister types of male entitlement. He believes because he offers Allison and Carly friendship that they owe him a sexual and/or romantic relationship.

As stated before, almost all the men are the worst. The only men in the entire story who are decent are Scarlett’s gay, married colleagues. This is perhaps the most problematic aspect of the book, as the only good men are gay is a tired and stereotypical trope.

The way I pitch this book is as the meme, “I support women’s rights, but I also support women’s wrongs.” Even though Carly and Scarlett turn to violence to exact justice, it’s a visceral satisfaction that’s easy to fall into. (spoilers, highlight to read) And while you’re waiting for it all to come crashing down, the unexpected happens: a happy ending. (end of spoilers)

Fargo’s writing is fast-paced and propels the story at a compelling pace. It’s hard to put the book down as you flip back and forth between Carly’s and Scarlett’s stories to see how they converge. 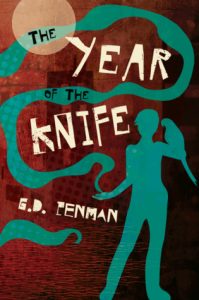 Agent “Sully” Sullivan is a witch and agent for the Imperial Bureau of Investigation in this book where the United States never gained independence from Britain. Sully is tasked with putting an end to a series of bizarre and gruesome murders proclaimed the year of the knife. As Sully becomes more entangled in the mystery, she and those close to her are put into danger, and it becomes more important than ever for Sully to solve the case and escaped relatively unscathed.

I saw this book a few months ago, and was excited by the premise of the book, and ready to spend my hard-earned cash on it – but, boy, am I glad that I didn’t spend money on this book. Sully is an unsympathetic, and in my mind, often unredeemable character. The book opens with Sully liquefying a perpetrator who she has tracked into the subway, cackling the entire time. Even when she accidentally kills possessed civilians she shows no remorse for her behaviours.

And veering away from the issues I take with the protagonist of the book, the author inserts some racist, classist, sexist, and otherwise problematic elements.

For one, Sully is treated as if she is the most oppressed character in the book because she is Irish. This is despite the fact that we meet multiple characters from India and Africa, who are arguably worse off in this British imperialist alternate reality.  Some prize quotes that further the issues of racism include “in all of Sully’s limited dealing with the Native Americans, she had never met one that wasn’t beautiful”, and “He was a tiny Oriental man, known as the Eternal Emperor.” And as if describing the man as ‘oriental’ wasn’t bad enough, the man’s translator was previously a sumo wrestler – because, you know, what else do Japanese people do?

Despite Sully being one of the poor and oppressed in this book, and one who hates the British Empire and what it stands for, we still never see her having sympathy for other oppressed parties. In fact, the author gives us this gem, “Malcontent poor people who blamed the empire for every tiny problem in their life,” which entirely ignores and dismisses the problems that poor and oppressed peoples struggle with.

And finally, on to the sexism. Sully is an almost forty year old woman who the author refers to as a “not bad for a girl pushing forty.” This unfortunate turn of phrase that infantilizes women is only one example of issues with sexism in this book. Many of these also operate within the intersection of her being a woman and a lesbian. Sully is presented as the predatory lesbian stereotype, with this quote really exemplifying the stereotype “Thursday night was student night at many of the nightclubs in the city, and Sully had always had her pick of the presumably legal and fairly experimental art students. She liked to think of herself as a formative experience for a lot of girls out there in the world.”

I also take issue with the way the antagonist is forgiven for his acts. The antagonist possesses and kills hundreds of innocent civilians, but because he was doing it for a greater cause, his actions are forgiven and he is rewarded for them. I can’t go into too many details, without majorly spoiling the plot.

I wish I had only taken issues with these elements of the book, but the writing, and plot are both amateur. There are references to past cases, and past events that are never explained as if this were a latter book in a series, which it is not. When demons shout, their speech is written in all capital letters, which I am blaming the editor for because that should have been changed. The plot is convoluted and uninspiring. The ending is rushed and unrealistic within the canon of the story, and the romance between Sully and Marie leaves a lot to be desired.

Would I recommend The Year of The Knife? No.