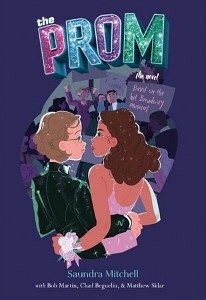 In October 2018, The Prom premiered on Broadway. It was a musical inspired by real events with a great deal of glitter thrown on top, and I was one of the people lucky enough to see the original cast on Broadway, because a good friend surprised me with tickets on my trip. The musical was fantastic, but sadly had a much shorter run than deserved, but it’s a book now, and we can all bask in its glory. The book is adapted from stage by Saundra Mitchell. Obviously the stage show has coloured my reading of the book, much like when you watch a film adaptation and you know all the bits they missed out. So I’m going to keep the comparisons vague to avoid spoilers, but I will still reference the show in my reading.

The story is set in Edgewater, Indiana, where our narrator Emma Nolan, informs us that it is a bad idea to be gay. Heads up, homophobia is a very presiding theme in this story, so if you are looking for a cute romance with no obstacles or politics, this may not be your read. Emma’s story preceding the book has been a difficult one, all too familiar to a lot of queer readers, but sadly a story that still must be told. The second narrator is Alyssa Greene, love interest, student body president, and perfect daughter to the overbearing leader of the PTA. The tension in the story all revolves around the fact that out and proud(ish) Emma would dearly like to go to prom with her closeted girlfriend. The PTA gets in the way, Broadway actors find out about the scandal and try to help. All hell breaks loose.

I’m torn over the structure of the book. On the one hand, I really enjoy swapping between Alyssa and Emma’s narratives, and this structure actually gives Alyssa a lot more agency and power than she has in the show. However, there are glimpses of scenes which exist on stage that they had to cut due to a lack of POV character, and are mentioned as asides, which make little sense. It’s a bit like only watching half of a crossover episode and wondering what you missed out on. The Prom is a nice short read, clocking in at just over two-hundred pages, so I think it might have made more sense to either expand to allow more points of view, or simply axe some of those asides altogether and focus on the main plot. The weirdest of these is perhaps that the book opens with reference to a broadway show flopping, and then doesn’t allude to this at all for about fifty pages. It makes a lot more sense by the end, but I personally think that the articles which serve as prologue and epilogue detract a little from the main narrative and are really only there for fans of the show.

The tone of the book is inescapably teenage highschooler. It’s a YA novel adaptation and it knows it. Pop culture references are abound, and if you aren’t up to date on your American High School slang (I am not), you might find yourself rereading a few sentences. But for the most part, I found the pop culture references hilarious and engaging. Emma’s narrative has a sarcastic and witty snap to it which is delightful to read even when things are going wrong. It also spans a decent range from memes, music, and tv, as well as inevitably a large number of broadway shows. This book genuinely made me laugh out loud on multiple occasions, and it’s chock full of genuinely wise quotes about homophobia, acceptance, and life in general.

(This bit is only about differences to the show, so if you aren’t already a fan, be ready for spoilers.) Firstly, there are some great little cast easter eggs in the names of the characters, some very obvious and some quite sneaky. The words of many (if not all) of the musical numbers have also made it into the writing one way or another, with several of them providing a lot of backbone to the plot, and others acting as throwaway lines which maybe don’t quite work. As I’ve already alluded to, the broadway characters don’t get a point of view. Dee Dee and Barry are still in it, but Trent and Angie have been axed entirely (despite the cast of Godspell still being present). Dee Dee really is turned into a caricature of what was already a largely than life character, but Barry somehow manages to retain depth and dignity, despite soaking up most of Trent’s role in the narrative.

Seeing the show and then reading the book definitely changed my reading of the book, and I’m very interested to know what others think who haven’t read it. From an adaptation standpoint, I thought it was a very cute read, with a lot of power, which overall took the narrative from a new angle and made sure we got more of the love interest’s side of the story. I would recommend this book highly to people who have seen or know the show, and and anyone who just wants a nice triumphant story about love against all odds. 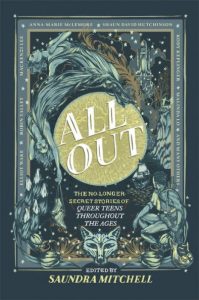 [This review contains very vague spoilers (no specific plot points, though) and mentions of violence]

This exceptional short story collection, edited by Saundra Mitchell, is a sterling addition to WLW fiction. The vast majority of the seventeen stories included involve major WLW characters and without fail, every tale is breathtakingly beautiful. The historical settings range from a convent in medieval Spain, to small-town USA in the 1950s, right through to grunge-soaked Seattle in the early 1990s. Similarly, the young women included in the WLW stories vary greatly in their personalities, identities, dreams and loves. The one thing all the stories have in common is that none of the protagonists have unhappy endings. The book has successfully set out to show queer teenagers have always existed and thrived, even in the most adverse circumstances.

The heroism inherent in merely existing as a queer person is captured brilliantly in every story in All Out, with some of the stories including magic and fantasy to further heighten this theme. Leprechauns and witches–as well as peasant girls, waitresses and nuns–all show themselves to be strong, generous and brave when their circumstances would have them give up on life and love. Too often fictional portrayals of WLW in historical settings show these women to be doomed, but these stories reward their characters with happiness and promising futures. And the long past times in foreign places portrayed by the authors never feel distant given the amount of detail and nuance each story is imbued with, so that the reader is transported completely each time.

It is to the reader’s benefit not to know too much about what each story will contain, with only the promise that none end in tragedy, so there’s no need to be anxious when reading. Inevitably certain historical settings mean there are depictions of violence at times, but this is not the over-riding theme of any story, with queer love stories and self-discovery always emerging victorious.

Do not miss this book, it is a glorious expression of the love and light that has always filled WLW.

One of the challenges of finding a queer community is not only connecting with your people, but also unearthing your history. Queer people have always existed, but our existence has been covered up and buried. It can feel like we have no history, which is alienating. All Out is a much-needed book, because it locates queer people (teens in particular) through time. It is also optimistic historical fiction. It imagines not only queer teens in the past, but how they might have found happiness there. It rejects the idea that queer people don’t have a history–or that if they do, it is fundamentally tragic.

Although all the stories are historical fiction, they do sometimes play with genre by including magical realism, fantastical elements, or fairy tale retellings. There are trans, gay, lesbian, asexual, and aromantic characters. (I can’t remember bi characters? But I may have missed that.) There are a lot of different time periods (~1200s-1999) and cultures involved, although I would have liked to see more stories set outside of North America and Europe.

The story that really stood out to me was Malinda Lo’s. It’s about a Chinese girl in San Francisco in the 50s, and the male impersonator she has a crush on. It incorporates race, sexism, space exploration, the Chinese immigrant experience, and lesbian pulp fiction–all in such a short space! I really loved that story, and maybe it’s unfair to want a short story to be a novel, but… I do. Luckily, I think we might be getting it! There’s definitely enough here to flesh out, so I’m eager to get my hands on the novel version.

That’s my favourite, but I really enjoyed most of the stories. Dahlia Adler’s contribution that features two girls coming out to each other at Kurt Cobain’s vigil was another memorable one, and you really can’t go wrong with a story about two girls sailing off into the sunset together. (Well, you could, but they didn’t.) There are fun, captivating stories that make the world feel a little more open and inviting, so I have to give this 5 stars.