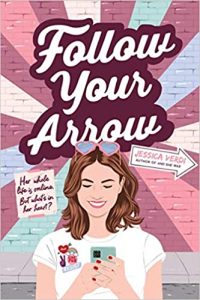 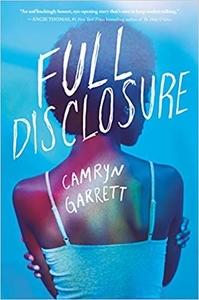 Full Disclosure is about Simone, a teenager who’s been HIV positive since birth. Her dads have done their best to make sure she has the best possible life, and as long as she takes her medication every day, her day-to-day isn’t much different from her peers. The problem is not so much with symptoms or medical care, but stigma. At her last school, her peers turned on her when they found out her diagnosis, and she had to switch schools. Now, she just wants to enjoy directing the high school play and hanging out with her friends and crushing on a boy without having to think about how people would react if they knew. Which is why getting blackmail notes threatening to out her if she doesn’t stay away from her crush is particularly terrifying.

I will say up front that this has a bisexual main character, and the central romance is M/F. But even aside from the bi main character, there is queer rep aplenty: Simone has two dads, one of her best friends in an asexual lesbian, and the other best friend is also bisexual. In fact, it’s partly because Simone is surrounded by confident, out queer people in her life that she doesn’t feel like she can claim the word bisexual for herself. Sure, she has crushes on celebrity women, but that doesn’t count, right? And liking one girl isn’t enough to be able to call herself bisexual, right? An undercurrent of the story is Simone coming to terms with her sexuality, and realizing that she can claim that identity. (Also, her–almost?–ex-girlfriend is awful.)

I find this book a little difficult to describe, because on the whole, I found it a fun, absorbing, even fluffy read. Simone is passionate about musical theatre, and she is excited and intimidated to be acting as director. She is swooning over a cute guy (also involved in the production), and their romance is adorable. Simone’s friends are great–even if they have some communication issues–and so is her family. She is surrounded by support, and there is a lot of humour sprinkled throughout.

On the other hand, Full Disclosure also grapples with the stigma around HIV positivity. Simone’s dads felt that it was fitting that they adopt an HIV positive baby, after having lost so many people in their lives to HIV and AIDS. There is discussion of what living through the epidemic was like, and the extreme bigotry towards people with HIV/AIDS. Simone is being blackmailed, and she lives in fear of having people turn against her again. She doesn’t feel like she can even talk to the principal about it, because it could mean that the information could get out. Even her best friends don’t know.

There is tension between the lightheartedness of the book as a whole, and the serious underpinnings. It meshes well, though, and doesn’t feel like bouncing between emotional extremes. Instead, it portrays that HIV positive teens can have happy, fulfilling lives and also have to worry about unfair, hateful treatment. They can be carefree in most aspects of their lives, and also have to take their health very seriously.

Full Disclosure is masterful, including well-rounded characters, an adorable love story, and a protagonist who grows and matures over the course of the novel. I highly recommend this, and I can’t wait to read more from Camryn Garrett.