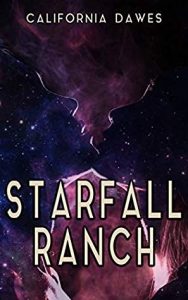 Shiloh “Shy” Kerridan moved off-planet to Sirona to start a new life five years before. Thisbe Vandergoss just escaped Earth to Sirona to elude the clutches of her evil parents. She left behind a life of wealth and privilege for the freedom she craved. Thisbe applied to be a mail-order bride for a rancher by the name of Sean Kerridan, but she ended up on the wrong side of the planet and met Shy instead. Shenanigans ensue.

It takes a long time for the story to really take off. A short chapter is spent on introducing Shy’s character, but then several chapters take up Thisbe’s story as she contends with her parents’ dastardly plans to force her into a medical procedure she does not want to do. It’s not until Thisbe accidentally ends up at Starfall Ranch and meets Shy that the story starts. Everything before the meet-cute is set up.

The misunderstandings that occur as Shy and Thisbe meet and interact are cliche, but they work. It creates a compelling relationship that makes the reader invested in their romance. It’s the perfect formula for the rom-com genre. Shy and Thisbe are such a stark contrast of one another on the surface, and that’s what gives them chemistry. For anyone that fantasized about a relationship between Tahani and Eleanor on The Good Place, this comes close.

But the character development did leave something to be desired. After a certain point, it became hard to distinguish the main characters’ voices from one another. In real life, there’s a certain crossover that occurs when people develop close relationships, but the way Thisbe and Eleanor both spoke began to blur the line between who was who. It especially didn’t fit with Thisbe’s background.

Thisbe’s characterization felt all over the map. She was raised in a wealthy society, but she spoke like someone from a middle-class background. There are a few details that tell the reader she rebelled against her parents’ manipulative upbringing, but it doesn’t totally explain her tone and word choice when she speaks. Not to say that rich people can’t cuss, but the way she was described didn’t jive with the way she acted and spoke. There was a lot of dissonance with her character.

Shy’s character remains a mystery throughout most of the novel. It’s clear she has some demons of her own to contend with, but the audience doesn’t even get a glimpse of them until nearly the end of the book. Close to the end, Shy tells Thisbe her background story, implying her survival of sexual assault. The narrative doesn’t go into detail, but it doesn’t have to. That’s not the point of her sharing her story. It’s meant to build trust with Thisbe.

It does feel like Shy’s story should come up sooner. An earlier introduction of her issues in the narrative would have made the impact of Thisbe’s perceived betrayal much more impactful. Regardless, the reader is still invested in their reunion after the fallout.

There is a scene that stands out as problematic, based on Thisbe’s word choice. She is at dinner with the slimy, straight male character in the story, purely out of espionage and survival. But of course, Shy happens upon them just at the wrong time and thinks the worst. Shy thinks the two are romantically involved, and Thisbe’s reaction is not great. She states, “I’m going to pretend like you didn’t just insinuate I’m secretly straight…”

What makes that dialogue problematic is that it erases the spectrum of queerness. To imply that the only right way for a woman to be queer is to be a lesbian who is only interested in women. It erases bisexuality and other queer identities. It’s an angry statement made in the heat of the moment, but it implies that interest in a man makes queer women less queer. There’s no room for nuance.

The book counts as a sci-fi romance because it takes place on a whole other planet, but that setting is wasted in this story. Starfall Ranch and its surrounding communities have enough in common with Earth that only the names of different fruits and plants distinguish it. More than that, the focus was solely on the relationship and romance between Shy and Thisbe.

The story could have taken place anywhere and it wouldn’t have affected their relationship. The use of an off-planet setting merely worked as a tool for Thisbe to put distance between her and her parents. She could have done that by moving to the other side of the world, not to another planet.

Dawes’ novel includes a non-binary character that never gets explained, and that is a refreshing change of pace. It’s made clear they’re non-binary because Wallis strictly goes by they/them pronouns. The characters around them accept it without question and no one ever feels compelled to give a vocabulary lesson. It’s clear this is meant for a knowledgeable audience and never meant to make those who are not in the know comfortable.

Overall, it’s a fun romance story and it keeps the reader interested enough to have an investment in the characters’ happily ever after.