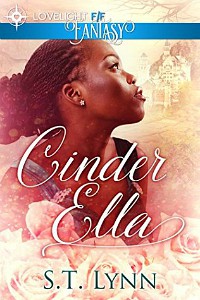 Fairy tales are comforting because we know how they’re going to go. These days, with the advent of modern fantasy, there might be a lot of changes to the incidentals. Maybe the Prince is a marine biologist. Maybe the Evil Stepmother is a media mogul in NYC. Maybe it’s set in a post-apocalyptic wasteland, and Snow White is aided by some helpful zombies; maybe it’s set off planet and Rumpelstiltskin owns a space station. But we know, unless it’s produced by a horror publisher or written by an author lauded for her edginess, that we’re probably going to get a happy ending.

I came across S.T Lynn’s Cinder Ella by accident, looking for something else. But the official copy caught my attention:

Ella is transgender. She’s known since she was young; being a woman just fit better. She was happier in skirts than trousers, but that was before her stepmother moved in. Eleanor can’t stand her, and after Ella’s father passes she’s forced to revert to Cole, a lump of a son. She cooks, she cleans, and she tolerates being called the wrong name for the sake of a roof over her head. Where else can she go?

I grabbed an ebook copy off of Amazon, and I read it on my phone, which was actually not something that I’ve done before. I was immediately charmed. The story is brief at 62 digital pages, making it perfect for a bus read or to pull out while you’re waiting at the doctor’s office. And while I expected total fluff (that being one of the provinces of many retellings of fairy tales) I got a little something more. Ella is, from the first page, a delightful heroine. She takes what pleasure she can in the little kindnesses of the day (a happy dog, a rose cutting beginning at last to shoot) but doesn’t balk at dreaming bigger. Even when she’s downtrodden and abused, she doesn’t lose the ability to look for joy in and improve her situation. But for all of that she is not saccharine or sickly sweet. She grows angry. Her pain is raw. And so much of her determined happiness is simply her best coping mechanism for dealing with cruel, abusive family.

The story is absolutely a piece of wish-fulfillment, and frankly I think that’s a good thing. There’s just not a whole lot of fantastical representation of black trans WLW, and what we do see is rarely so sympathetic or so loving as this. Ella gets to eat delicious food, she gets to wear a designer dress, she is pursued by the heiress to the kingdom. When’s the last time we saw such blatant gift-giving to trans readers of color? Every bit of abuse heaped on Ella by her stepfamily is contradicted by the other people that she meets, and while even this brief narrative doesn’t suggest that everything is just going to be mended as though the hurts were never real,

Due in part to how short it is, there’s a lot in this story that doesn’t get told. We know who the Fairy Godmother-stand in is, but we don’t know anything about her, or how Ella came to her attention, or how magic works in this world and why people are fairly careless in witnessing it. We know Ella’s backstory so well through sheer cultural saturation that it goes almost entirely unmentioned. We know all the roles–the Princess where the Prince would be in most tellings, the nasty stepsisters and evil stepmother, the animal companion–but we aren’t given any details about their internal lives or motivations. This is a quick, bouncy story with a very direct energy, and it doesn’t need to be more than that.

The single criticism that I honestly have, viewing this for what it is, is that I wish Ella’s mother had been present in the text. In the oldest versions of Cinderella, it is actually her mother who performs the acts that the Fairy Godmother takes over in more recent versions. Sometimes the mother is a fish, or fish bones, as in the fifteen-hundred-year-old Chinese story of Ye Xian, sometimes as in Aschenputtel she is the tree that grows over her own grave, and the birds that sing in the tree, and the bones in the grave below. But regardless of her form, in most versions of the story the dead mother’s influence is a tangible thing, in both the jealousy and hatred of the stepfamily, and in the deep strength and self-assurance that Cinderella is able to find for herself. She doesn’t appear in this tale, which I thought was a wasted opportunity for depth.

Unusually, Ella’s father’s influence does make an appearance, in a song that she hums to herself in the beginning. Given that most of the characters with names or speaking lines in the story are female, I thought it was meaningful that one of the only representations of masculinity was loving and gentle. Frequently in WLW fiction the male characters are boorish or cruel. It was kind of an interesting turnaround to see only the kinder side of fatherhood, while women were given as much to unkindness and manipulation as they were to sweetness.

All in all, this one’s an enjoyable afternoon read. 3.5 of 5 stars.