Cara is a traverser in a world where travel between universes has been discovered. In most worlds, she’s dead, making her the perfect candidate for the job, as traveling to worlds where your counterpart is still alive results in your death. But the protagonist isn’t all she seems, and neither is the company and people she works for. Once she learns the truth about the business of multiverse travel, she must decide where she really belongs.

There are so many layers complementing each other, showcasing the intricacy of the issues presented. It’s a story about class divide, power, ethics, morality, capitalism, family and relationships. Every element is intertwined with one another, making Cara’s journey complex as she navigates who she really is.

The whole book is incredibly well-paced, with plot twists you never see coming and happening just at the right time. Perhaps this is because Cara is an unreliable narrator and you only ever see the world through her eyes. As she perceives her role in multiverse travel and ignores the bigger picture for much of the story, it’s hard to see what’s coming. This is what makes her such a compelling main character and the story so entrancing.

Johnson creates a dynamic duality of science and religion with the concept of traversing. During the process, traversers experience trauma that leaves them bruised, and if done too frequently with no breaks between jumps, even causes broken bones. Cara describes it as pressure as her body pushes the boundaries between worlds. She and the other traversers refer to this phenomenon as the goddess Niameh giving them a kiss. But the scientists behind traversing simply explain it through logical means, referring to physics and biology. There’s also a layer of Niameh representing beliefs other than white Christianity.

Through Cara’s backstory and memories, there are nuanced discussions of being a victim of abuse. The multiverse shows what can be if people’s circumstances are different. At the same time, it puts on display how complicated emotional ties are between abusers and their victims. It brings to mind questions like, “Can you love someone who is abusive, especially if you know the kindness they’re capable of?” and “Can you resent a kind person you know is capable of violence and abuse they haven’t committed in this world, but have in another?”

Cara’s character arc takes her from hating where she comes from, Ash, to accepting who she is and where she’s from is nothing to be ashamed of. She longed to become part of Wiley City for so long, only to find it wasn’t as bright and shiny as it appeared on the surface. To become Wiley was to accept a definition of success determined by those in authority, rather than success on her own terms.

I listened to the book on audio, narrated by Nicole Lewis, and I highly recommend it if you like listening to fiction on audio. Lewis is a charismatic narrator and brings every character to life. 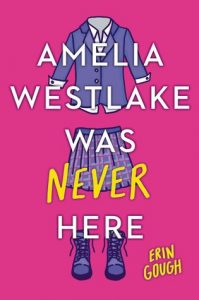 Erin Gough’s Amelia Westlake Was Never Here is one of those hidden gems I want the world to wholeheartedly embrace. On the surface, it’s a rom/com of sorts, with a delightful enemies-to-lovers romance, but if you look a little deeper, it’s message is timely and important.

Harriet Price is pretty sure she’s got her life perfectly planned out. She works hard, makes good grades, has a beautiful and ambitious girlfriend, and is just waiting for her chance to take the world by storm. So, if everything is going so well for her, what could have possibly possessed her to team up with troublemaker Will Everheart to bring to light some of the many problems experienced by students of Rosemead, the elite school the two girls attend? Harriet tells herself she’s seeking justice for those who feel powerless to speak up for themselves, but the reader is aware pretty early on that there’s more to it.

Will can’t stand Harriet. At least, that’s what she tells herself on a regular basis. Harriet is far too prim and proper for Will’s taste, and she takes life way too seriously. Still, she’s the perfect person for the hoax Will has in mind, and Will is nothing if not steadfast when she’s got a point to prove.

Together, Will and Harriet come up with a daring plan to create change in the hallowed halls of Rosemead. Using Will’s artistic talent and Harriet’s way with words, they create a fake social media profile for a student they christen Amelia Westlake. In Amelia’s voice, they recount the many injustices faced by various Rosemead students, and find themselves drawn closer together in the process.

Both Will and Harriet are well-drawn and likable characters. The author manages to give them distinct personalities with very realistic strengths and weaknesses. I loved getting to know them as they get to know one another. The novel is a fabulous reminder to look beyond our initial impressions of those we encounter, but the author doesn’t hammer the point home in an aggressive way. Instead, she allows the relationship between Harriet and Will to organically evolve, a much more subtle and meaningful way to get her point across.

I didn’t find much in the way of troubling content here. The story examines class differences and privilege in a way most readers should be able to identify with, though there is a bit of an emphasis on bullying. The descriptions aren’t overly graphic though, so I encourage you to give this delightful novel a try. It turned out to be one of the highlights of my summer reading so far. 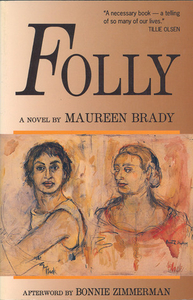 This month I read Folly by Maureen Brady, an extremely interesting working class lesbian book published in 1982. Folly is set in a small factory town and follows several women as they struggle to reconcile their desires for a better life with the reality of their jobs and lives. The title character, Folly, works with several area women, including her best friend and eventual lover Martha, to organize a factory strike after a woman is arrested after the death of her baby due to their lack of sick leave. Meanwhile Lenore, a recent high school drop-out, misses her girlfriend, who has gone to work on the Alaskan pipeline, and struggles to find community and meaning in her small town life. I found Folly to be incredibly engaging and self-aware, and I frankly can’t believe I haven’t heard of it spoken of it before either in a feminist/working class literature context or in a queer lit context. And as someone who grew up in a very small town – although not quite as small as Victory – a lot of the themes and internal struggles the characters faced struck very true for me, and of course it is very easy to get behind women fighting for better conditions.

One thing I really loved about Folly is that it shows multiple generations of women having relationships and discovering their sexualities in a variety of ways. Martha and Folly are middle-aged factory workers and best friends. They live next to each other, deal with all of their problems together, and constantly lean on each other for support. Folly is generally supportive and willing to live and let live at first, but it takes her a while to apply to concept of queerness to herself. When she finally does, she embraces it and works eagerly to incorporate her new knowledge about herself into her life, which was something I found personally very relatable. Meanwhile in the younger generation, Lenore works at the local butcher counter and misses her girlfriend, who is working on an Alaskan pipeline. Lenore is secure in her own sexuality, but is continually looking for some sort of community. She befriends Mary Lou, Folly’s daughter, who is going through the usual teenage growing pains but also finding she is not much interested in what the local boys want to get up to on dates. She is intrigued by Lenore’s independence, and, later, wants to know more so she can come to terms both with herself and with her mother’s changing decisions and priorities.  I really enjoyed seeing different queer women in different stages of their lives interacting in a small town setting. Despite all the hardships they go through, they find strength and growth in their relationships with each other, and it was really joyful for me to read that.

Another important thing I enjoyed about Folly is that it closely examines white women discovering their own biases and privileges. Folly doesn’t give much thought to the larger picture of things until she convinces Martha to back her up in calling for a strike. When Emily, a black factory worker, stands up with her, first for a reduced production rate, and then on the call for the strike, Folly slowly realizes how important it is to expand her worldview and be inclusive in her organizing. Throughout the book, she continues to listen to black organizers, learn from their viewpoints, and have empathy for others. Meanwhile, Lenore is lonely and makes friends with Sabrina, a server at the diner who is black. As she gets to know Sabrina, she has to become aware of and confront her own internal biases and the realities of interracial relationships in a town that is essentially segregated and has a Klan presence. The frank way the book approaches Folly’s growth in organizing and Lenore’s slow eye-opening to how she’s benefited from and lived under the town’s racism makes a powerful impact and can be summed up with how Folly explains to Mary Lou that “A lot of life is following one habit into the next. You got to stop yourself and peel your eyes open all the time if you want to see what goes on.” I really, deeply enjoyed how the book looked at this head-on, and had the characters really spend time thinking and reacting and changing.

The last important thing about Folly is that it is always pushing for a better future. Folly and Martha always have dreams for their futures, the women in the factory organize around their own needs and principals, and they are constantly seeking to learn, grow, and build relationships. Folly and Mabel don’t just trust the union’s goals – they recognize that the union rep looks a lot more like factory ownership than them, and doesn’t have their same priorities. Folly is constantly pushing for more goals and more progress, and doesn’t like the idea of compromising on what they want. Lenore could sink into her life of her job and her own little apartment and writing letters to her girlfriend, but she wants more than that and continually seeks out new community. The women of Folly are intimately aware of how to survive in the world they live in, but they want to work for more, and that’s very important to read.

In conclusion, Folly is a very enjoyable novel about working-class lesbians trying to build their own community and sticking up for themselves and their fellow workers to factory management. It deftly handles themes of labor relations, race, and sexuality while maintaining a positive and hopeful outlook. It moves between generations, is self-aware, and is, in general, a really gripping read. I definitely recommend tracking down a copy!