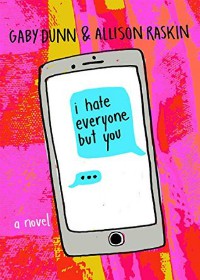 It’s a shame that New Adult as a genre never really took off outside of Romance, because I think there’s a demand for it. The just-after-high-school years, whether they’re spent in college/university or elsewhere, have distinct challenges. I Hate Everyone But You is set during that time, following Ava and Gen as they are just beginning university. They have been inseparable best friends for years, and they stay in contact through constant emails and text messages.

The entire novel is written in these emails and text messages, making it a modern version of an epistolary novel. It’s an interesting format: it’s an extremely quick read, and because they are so close, Ava and Gen both share their innermost thoughts while providing their own narration of what happened. There is an element of unreliable narration because we only see it through their stories, but you can usually read between the lines to figure out what “really” happened. They deal with typical issues with that stage of life: dating, sex, drugs, and figuring out their identities. This isn’t shied away from, but because it’s texts and emails, these experiences are not told in detail as much as they are just matter of fact statements. They also bring their existing baggage to this new life stage: Gen comes from a dysfunctional family with an alcoholic father and enabling mother, and Ava deals with intense anxiety (and possible OCD?).

If you like Gaby Dunn and Allison Raskin’s online presence, like their Just Between Us youtube channel, you’ll probably like this book. Their characters very much seem to match their personalities. The strongest part of this book is the bond between Ava and Gen. They fight–in fact, they bicker almost constantly. But that’s because they are open and honest with each other. They call each other out. They ask uncomfortable questions. They aren’t afraid to be their whole flawed selves with each other–and they have a lot of flaws.

For instance, Gen comes out as queer over the course of the book, and Ava can’t seem to let go of some variation of the question “Wait, are you gay now? Why do you like this guy: aren’t you gay now?” Ava has some ignorant questions about the queer community, to Gen’s irritation, but she means well. If you don’t want to see someone struggle through their heterosexist assumptions, this might be painful to read (she also asks Gen about a trans person’s genitals at some point). Transphobia is addressed here, but it may not be given the depth and time that it deserves.

Despite all these disagreements, though–despite their anger at each other or disappointment, despite lashing out and ignoring each other at times–there is never any question of their loyalty and love for each other. They are family. They are able to process ideas and emotions with each other, to bounce off ideas and try out new labels. They know that they will still be accepted by the other, no matter what conclusions they come to.

This isn’t a story for everyone. The format itself will put some readers off, though I found it absorbing. There is less of a plot and more of an exploration of these characters and their growth (apart and together) over time. On top of the heterosexism and transphobia included (though called out), there’s also a very questionable relationship between Gen and Charlotte, a T.A. almost twice her age with a propensity for sleeping with undergrads. As for me, though, I really enjoyed spending time with these characters: I liked that they were able to share even the most messy or uninformed thoughts and feelings with each other, and I found it to be a very quick, engrossing read. I look forward to diving straight into the sequel.