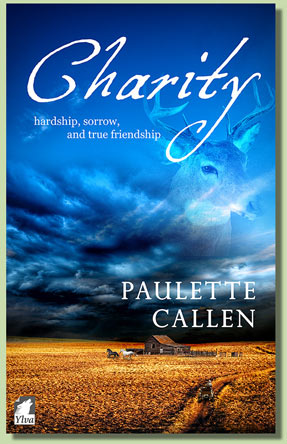 Charity is a novel that mixes several genres. It is definitely historical fiction, set in the late 19th century in a small town in America, and it is also sort of a lesbian romance novel, but there’s definitely the element of a mystery as well. At the same time, it’s an exploration of the town of Charity, but one family in particular. It has two protagonists, Lena, a woman married to a drunk with a large and unlikeable family, and Gustie, a schoolteacher with a tragic past that keeps her constantly travelling back and forth between Charity and the nearby Red Sands reservation.

Charity was first published by Simon and Shuster in 1997, and has been republished by Ylva, with the sequel (Fervent Charity) being published by them soon. The writing is easy to read and even occasionally poetic, the characters are strong and believable, and the different plot strands are compelling. I found the cast of characters a little overwhelming at first, especially in that Will, Lena’s husband, has his whole family described, and keeping them straight is pretty important to understanding the plot. The romance was sweet, though I still wanted to know more about her love interest. I thought the mystery was very well done. I had no idea who the culprit was through the majority of the book, but when it was slowly revealed, I realized that the clues had been there the whole time. It’s a proper mystery, in that a shrewd reader could have figured it all out beforehand (I did have the vast majority pieced together before the end, but only about ten pages before the final reveal), but will still be a surprise for most people.

What was most intriguing and what I was most worried about, however, was the depiction of the Native characters in Charity. There is a tendency for romance novels (straight or queer) to fall into the habit of making Native characters mysterious, spiritual, ephemeral beings–the “noble savage” stereotype. There is also a tendency to posit Native people as being people from the past, ignoring that Native cultures and people are just as much part of the present. Setting a story (partially) about Native people in the past could play into this, I worried, though it is also an opportunity to tell some of the horrific stories of colonization that are glossed over in white Western accounts. So a big part of my critical thinking around this book was centered on the representation of Native people. I’ll have to go into a few spoilers to discuss it, but nothing too major. Oh, also, speaking of spoilers but necessary thing to discuss, trigger warnings for cutting as well as suicide in this book. Especially cutting, which is depicted positively.

Charity does tell the story of some of the horrors of colonization, including death from disease, some of the suffering in residential schools, white officials cheating Native people out of their allotments, and of course the casual racism of most of the people in Charity, including Lena. Gustie is disgusted by this treatment, but it doesn’t completely change Lena’s mind by the end of the novel–she softens, but still refuses to let a Native woman stay in her house. At some point, a group of Native men play into the “bloodthirsty” stereotypes in order to scare a white guy off, and then laugh at his ignorance for thinking that they were serious. Overall, I thought this was a decent representation, since it is realistic to present Lena that way, and I don’t believe we’re supposed to agree with her. I was more concerned about Gustie, actually. When the reservation is cheated out of their allotments, she is outraged and vows to fix it, but that sort of plays into the white savior idea: that she, as a white person, can save these Native people who of course aren’t able to save themselves. At the same time, it’s true that as a white person, Gustie did have more options available to her to help. Another part that made me uncomfortable was that she is called two-spirited by a Native character, which is a term that–at least now–is only for Native people. She also has the Deer Spirit appear to her. One character says she is trying to “play Indian.” She sadly says, “I am the wasichu [white person] for whom you will not dance” to Jordis, apparently trying to guilt her for not wanting to make her traditional dance entertainment for white people. It is the Native characters that are putting this onto Gustie, “adopting” her, but it’s also (as far as I can tell) a white author writing this. So that made me a bit uneasy, but most likely it will play out one way or another in the sequel.

Despite a few issues, I enjoyed Charity, especially the mystery plot and the characters of Gustie and Lena, and I would recommend this one if it sounds interesting to you!