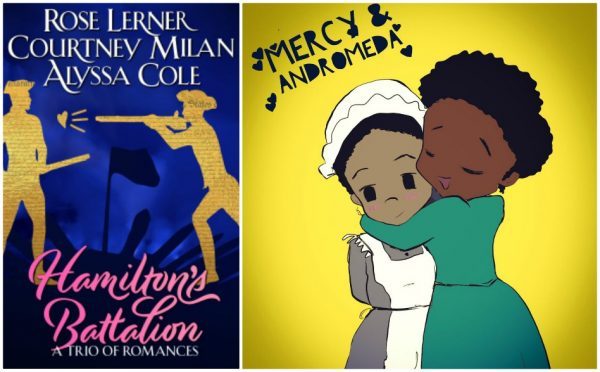 Alyssa Cole’s drawing of her characters

That Could Be Enough, the lesbian offering in the early American romance collection Hamilton’s Battalion, is everything a gentle historical f/f romance should be. Both characters, Mercy the servant/secretary and Andromeda the dressmaker, are fully fleshed out even within the novella’s small scope — it feels fully complete and I truly felt like I watched their courtship unfold even though it’s less than a hundred pages (in my Kindle app, anyway.)

The skeleton is your basic “woman has been hurt Really Badly and finally opens up to love again despite all her fears” trope, but the prose is so approachable and the characters so vividly painted that it felt completely fresh to me. When Mercy first sees Andromeda in the doorway of the house where she works, she’s affected in a soul-claiming way that I don’t often see represented in the romances I read but have definitely experienced in the presence of a gorgeous and captivating lady.

Mercy’s a poet, but she shut all of that down because of the way a previous girlfriend treated her poetry as part of a cruel, fatalistic breakup. “There’d been a time,” Cole writes, “when she’d felt beautiful things acutely.” This is someone who’s natural personality wants to appreciate and worship all the glories the world has to offer, but can we blame her for being terrified and walled-in after such treatment, and with nobody else in her life – before Andromeda – contradicting her ex’s pronunciations about the fate of queer lives? However, when she starts emerging from her shell again, the poem Cole gave her to write is truly beautiful. I’d put it in the review, but I want you to discover it for itself 😉

In this respect Cole herself is a bit like Mercy, inasmuch as she did some truly stunning things with language. For example, close to the story’s opening, Mercy accidentally wrote “Yearned” in her diary when she was too tired to stop herself. The next morning, she scratches it out, in progressive horizontal lines compared to a wall, and replaces it with “Slept.” That’s some powerful imagery right there. We feel her sense of perpetual retreat.

I also really liked the scene where Andromeda whisks Mercy away to something truly cool that the local Black community is working on, something that feels so in tune with Mercy’s own interests that there’s narration about how “seen” she feels, by Andromeda’s choice. I can relate to that a lot; being truly seen is high on my list of things that I’m hoping will get me out of my current, Mercylike frame of mind, romantically.

It does contain That Old Standard Trope where someone believes the worst and doesn’t ask for clarification, but from misunderstanding to pain to happy resolution there really aren’t that many pages and honestly I can’t say I’d have behaved any better in her place because when you’re scared of rejection, asking frankly is… difficult.

Andromeda is clever and enterprising and devoted to her community, especially to her fellow Black women, and Mercy is sweet and deserves lots of pampering and reassurance and validation after the kind of self-denial in which she’s been wallowing.

Author Alyssa Cole did her research and shows us a dainty, yet earnest portrait of what life might have been like for two relatively fortunate queer Black women in the early days of America. We queer women deserve a part in the costume drama world that dazzles many of our imaginations. So do Black women, not that I can speak for them, obviously. Cole’s plot solution/resolution is completely realistic, which makes it far more enjoyable for me because it’s easier for me, personally, to enthusiastically embrace a happy ending if it’s set up to be a plausible one.

That Could Be Enough fulfills its mission. The setup and resolution affirm that yes, while the road has never been a guaranteed red carpet, it has always been possible for WoC and those of us who are queer to have a far more decent life than the hungry eyes of non-queer white literature with its appetite for exploitative tragedy would have us believe.

Incidentally, the story does contain some bits here and there that will probably make more sense to people more familiar with the story of Alexander Hamilton’s life, but I was mostly able to piece together from context what Mercy’s inner voice was thinking about and don’t worry if they lose you anyway; they’re not key to enjoying the story itself. (He’s not even alive anymore when the story takes place.)

I don’t remember this having any of the most common triggers I usually warn for. It does have a sex scene, so if that’s your preference, enjoy!

Shira Glassman writes affirming fantasy and contemporary fiction centering mostly on queer Jewish women. Come join Queen Shulamit as she saves her country’s farms with the assistance of a dragon and a witch in The Olive Conspiracy, or hang out with Clara Ziegler as she dyes yarn to match a cute girl’s wildlife paintings in Knit One Girl Two—whoops, she just accidentally dyed the cat pink, too!