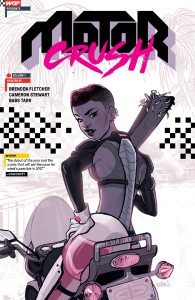 Domino Swift lives Nova Honda, a city where almost everyone lives and breathes racing.  You’re either a sponsored racer in the World Grand Prix or racing at night against biker gangs.

If you’re Domino Swift, you do both.

From the very first page, you’re rooting for Domino.  You want her to “crush” the competition, even if you’re first introduced to Domino when she’s racing a slew of biker gangs– and kicking all their butts.  These night races, called cannonballs, are a new definition of racing for pinks.  Instead of the pink slips to cars one would win at the end of a race, Domino is racing for a neon pink substance called crush.  Crush is mostly used to give a biker’s engine a boost, but Domino needs it to survive.

Domino must lead a double life and it causes contention with the people she loves, namely her ex-girlfriend, Lola.  (Though I hope they’ll get back together in the next volume.) Even though they’re not together, you can tell the love is still there between them.  Domino still tries to protect Lola when she’s get in trouble with some loan sharks.  They initially broke up because Domino kept Lola in the dark about her nightly activities and who she really is.  Lola wanted an all-open, honest relationship with Domino or nothing at all.  But how can Domino be honest when she doesn’t even know who she is or where she came from?

How can you tell the woman you’re in love with that when you take a neon drug meant for motors, you become one with the speed force?  Is she some human-machine hybrid?

There’s more questions than answers so far in this series, but you’ll be instantly sucked into to this high-stakes world.  The art is vivid and gorgeous, the storyline easy to follow, and I can’t wait for the next volume.