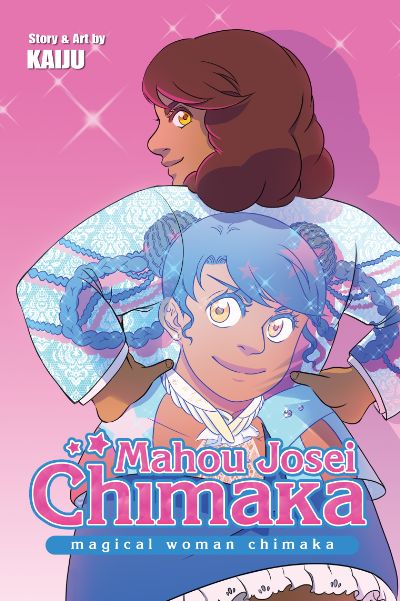 Mahou Josei Chimaka by Kaiju is a graphic novel riffing on all of the magical girl stories you know and love: as a teenage magical girl, Chimaka collected all of the artifacts she needed to save the world, went to battle her Destined Foe… And lost. Badly. After that, she broke up with her Destined Boyfriend From Their Past Life, failed most of her classes, and now Chimaka works as a Somewhat Bitter chemical engineer – at least until her Destined Foe wakes up again, and she is called upon to try to reclaim the magical powers she had as a teenager.

The core of the story revolves around Chimaka and her best friend/coworker, Pip; Chimaka confesses that she’s a magical girl to Pip (in a scene that made me laugh quite a lot) that she was a magical girl and now can’t access her magic, which Pip takes as a challenge to introduce Chimaka to the magic in the life that she is living right now. It’s really sweet and becomes a slow building romance of Pip putting so much thought and effort into impressing Chimaka, and Chimaka realising how much she appreciates Pip and her efforts. It’s really cute and sweet, and I enjoyed how it progressed!

To be perfectly honest with you, this is what I wanted from Sailor Moon: a consideration of how a character’s past life does not necessarily affect who they are in their present one. Plus, it explicitly engages with the idea of fulfilling a destiny and whether that is something that works for the character. It was so nice to read! (Although, without spoilers: I’m not sure how I feel about the creator’s use of a real world religion in the ending, even though I do enjoy the trope that they use when it’s in the context of a fantasy religion. Your mileage may vary!)

A quick word on the art – I quite liked it! The best parts for me were probably the costumes (very cute) and the facial expressions, because this comic has such a great sense of humour, and a lot of that is carried off visually. Chimaka makes exactly the right right faces for having to get her reports done and deal with the end of the world.

In summary: I think that this is a really cool take on magical girl tropes and on the question of “What do you do after you’ve saved the world?”, with a sweet queer romance holding it all together. Definitely recommended.

I read the paperback version of this, but it can also be read for free online. My copy had a misprint that lost page 26 from chapter one; if you end up in the same boat, it can be found here.)

One Reply to “Susan reviews Mahou Josei Chimaka by Kaiju”