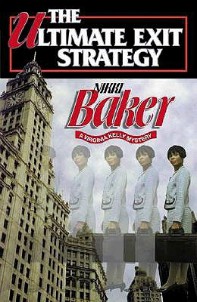 Hmm. This book was published by Bella Books in 2001, which would have made it one of their first publications. This means that for some reason Baker bailed on Naiad, who had published the first three books in this series. Naiad was subsumed by Bella two years later. The copy I read for this review was probably the only printing.

The fourth and last Virginia Kelly mystery takes place in the world of finance. The company Virginia has been working for since college, Whlytebread, Greese, Winslow, and Stoat, is about to be subsumed by a larger firm, Gold Rush Investments. This will make most of the Whytebread employees, including junior partner Virginia, fairly rich when they trade in their old company shares. There’s just one problem: Whytebread’s CEO, Wes Winslow, is murdered just a few days before the merger is scheduled to take place. If the murderer is not found, the deal will not go through. So Virginia sees it as her duty to solve the crime.

Like Baker’s other books, this one is too good to miss. Her flashbacks—often within other flashbacks—are not your basic narrative, but she manages to do it flawlessly—the reader always knows exactly where the story is going. Virginia is her old ironic self and her BFF Naomi Wolf is back to keep Virginia on her toes. To complicate the investigation, Virginia gets taken up with Detective Cassandra Hope, an old flame she would heartily like to rekindle. Then there is her faltering, long-distance relationship with Spike, who we met in Long Goodbyes. Virginia suspects that Spike is using her for her expectations and that Cassandra is using her to solve the case.

The British novelist C. P. Snow was a master at conducting dialogue without using actual quotations. Passages like: James was astonished when I told him that I knew his sister from my days at Cambridge. He told me that he had no idea that I had attended school there. Other novelists have done this as well, especially those that were not very good at rendering dialogue. But Baker goes Snow one better, blending active and passive conversation. Here’s an example in a conversation between Virginia and Naomi:

“I called Spike tonight and I broke up.”  I’d thought it was the best timing, considering Cassandra and all.

“Ok right.” Naomi picked up the mention of Cassandra as if it were a detail she’d forgotten.

An article should be written on the best buds of lesbian sleuths. Certainly Naomi is at the top of the list, followed by Nyla Wade’s Audrey Louise and Jane Lawless’ Cordelia. Oddly, many of our protagonists’ BFFs are actually gay men (see Barbara Johnson, David Galloway, et al). Whenever Naomi is present, there is a spark—not only in Virginia, but in the story. Yet the reader senses that a romance between the two would be a mistake. In this novel, Naomi is trying to give up smoking, which makes her even bitchier than usual. And, as always, she figures out things just a little before Virginia does.

I have seen a review of this book that complains that Virginia is not black enough for the reviewer’s comfort. It reminds me of another review I read about a lesbian sleuth that was not lesbian enough. Virginia is a product of her time and her culture. She did not grow up in a ghetto, her parents were not divorced, and she completed a good college education. In fact, this is a brilliant portrait of a black woman who is trying to make it in the predominantly white profession of personal finance. The book does not dwell on Whitey vs. Blackie. It dwells on a sensitive and very intelligent young woman trying to survive in a world she has chosen. Bravo.

The Ultimate Exit Strategy is as good as the first three novels in the series, or at least it would have been if not for the sloppy job Bella Books did on both the editing and the proofreading. But the author has to shoulder some of her blame herself for not going over the final galleys more carefully (presuming that Bella provided any). The specter of HIV is thrust into the plot at the last minute and not only was it not foreshadowed, but it seems to come to nothing. Somebody missed something, or a couple of somethings. Like the half-dozen discretionary hyphens that pop up in the text. And the more-than-usual typos. In short, Baker made a mistake changing publishers. Maybe she thought that Naiad’s current editor would not be as good as Bella’s. She was probably wrong. Maybe the relative failure of this title made Baker rethink her aspirations as a writer. After all, she has published nothing else in over 15 years. Yet The Ultimate Exit Strategy does not end like the last book in a series. Like the author, Virginia ends up leaving her Chicago firm. Many adventures seem to lurk in the future.

Will there ever be another Virginia Kelly mystery? Who knows. But regardless, Nikki Baker is wildly underrated and underappreciated. Her books need to come out in new editions, including e-book editions. Give this book—and this series—a near-perfect rating, despite the editorial glitches.