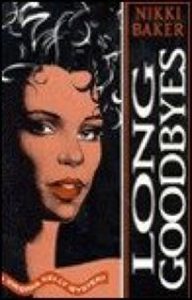 This is the third novel in Nikki Baker’s Virginia Kelly series. It is an odd novel. For one thing, unlike her other novels, it isn’t a mystery. Nor is it a thriller or a romance or any of the other typical genres. Although Virginia Kelly is the protagonist and the story is told in her inimitable voice, the location and the cast of characters has changed. Yet, except for a slightly sloppy ending, Long Goodbyes could be ranked high on a list of literary novels

Virginia Kelly, has traveled from Chicago to her home town of Blue River to attend her 10-year high school reunion. Because her relationship with her girlfriend Emily in Chicago seems to be over, Ginny becomes fixated on Rosie Paschen, her first love and her first lesbian dalliance, who has contacted her after a decade of silence to beg her to attend the reunion. But Blue River is not the same as it was when Ginny was a girl, nor are her friends. “I imagined many pasts in my home town, as many as there are individuals, as many as there are points of view. If they took up space, in the air overBlue River there would have been a huge traffic jam of individual perspectives returning, making it hard to avoid unfortunate accidents of colliding perception.

Ginny is looking forward to her meeting with Rosie  in order to complete an unfinished transaction, to show courage where she once felt fear. But when the two finally connect, Rosie is distant and standoffish. Ginny’s r near-obsession causes her to initiate sex with a reluctant Rosie anyway. And then Rosie completely disappears. The book is Ginny’s attempt to find her and make the kind of connection that she has been fantasizing about for years. Something that she hopes will validate her life and everything she has done up until this time.

Although Baker introduces Ginny’s parents and high school BFF Sandra, I missed the laconic Naomi Wolf, Ginny’s bud from Chicago. Without her, this novel is darker and more brooding, more desperate and haunting than the first two novels in the series. And I think this is the point. Ginny’s search is our search; the same search animals might make when looking over the fence or across the road or wondering what is on the other side of the mountain.

I wouldn’t be surprised if Baker conceived this novel as a stand-alone, with someone other than Virginia Kelly as the protagonist. But it works as it is and I was glad to connect with Virginia in a different setting. It must have been a difficult book to write—and to edit: Katherine V. Forrest missed a couple of convoluted paragraphs and seemed to be unable to get Baker to cut out unneeded scenes or characters—such as her gay friend Emery from high school. He was an interesting character and I would have liked to see him in another novel, but in this one he was extraneous. At 235 pages, Long Goodbyes is more than 60 pages longer than In the Game, which is a gem.

Despite its shortcomings, Long Goodbyes is a good addition to the Virginia Kelly series, and to lesbian fiction in general. It shows us another side of Ginny—one that most authors would hesitate to write. Anyone who is turned off by anything in the first two novels will certainly be turned off by this one. But for those of us who like Baker and Ginny, Long Goodbyes is simply another pleasure.