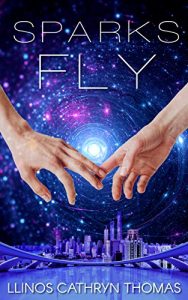 I don’t know what quirk of God’s imagination caused “arts college in space” to suddenly become a trope in the lesbian book world, but I’m eagerly on board. First Jennifer Linsky gave us Flowers of Luna, in which the heroine finds love while attending fashion design school on the moon. And then just now I recently read and enjoyed Sparks Fly by Welsh author Llinos Cathryn Thomas, set at a dance academy on a space station. (I said this in an interview elsewhere earlier this week, but if the next step is music teachers on Mars, sign me the heck up!)

I love everything about these setups. It takes a real life setting I’ve occupied in one capacity or another for literally half my life and transposes it into the glittery, sparkling world of the science fiction fantastic. Gone are 83rd St or Newell Drive; now there are stars and comets and space-dust just beyond the story’s stage. I also adore that arts-college premises are inherently intimate; my personal preference is for fantasy and science fiction on a small, character and relationship driven scale rather than epic sagas deciding the fates of nations and planets.

In other words, if you are like me this way, Sparks Fly is your next cute lesbian sci-fi read.

The first of the two protagonists we meet is next in line to become headmistress at the dance school, after working there for years upon years and devoting her life. Imagine her shock when she finds out she’ll be sharing the post with a celebrity dancer while she recuperates from an injury sustained during a performance accident. I wouldn’t call it enemies-to-lovers; more like awkward-to-lovers, with some friendship and chemistry in the middle.

Things don’t start out great for these two, but they’re both appealing, sympathetic characters and eventually they have to team up not only to achieve their artistic goals but to battle external conflicts.

A little about the worldbuilding – the “dance” in the story actually involves people zooming around a three-dimensional stage area in anti-gravity pods, so it’s definitely got one foot firmly planted in science fiction, not just set on a space station. Other details are very easy to picture, so this is probably not a story whose imagining will strain your brain as you read to relax.

As someone whose writing muse often tosses her keys at me early and says “okay, drive me home now, I’m done,” I hesitate to mirror my own critics with a wistful comment about wishing it were longer. However I do think maybe the story would have been stronger if we spent more time at the end after the plot resolution, getting to see/enjoy the happy ending in the direction the ladies took their professional lives. Of course, that doesn’t mean I’m right! I’m just glad for the existence of stories like this one. (And honestly about the length – novellas are a good thing; it’s a lot easier to fit one of those into a busy life than a full book.)

Catch Shira Glassman’s latest f/f adventure for $1.99 preorder for a May 7 release: Cinnamon Blade: Knife in Shining Armor, which is a superhero/damsel in distress romance. She’s rescued her so many times — now can they finally go on a normal date or are there too many Monsters of the Week?