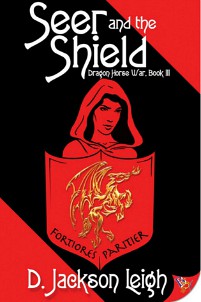 “She wanted the guard to relax and see them as people, not just the enemy”

Seer and the Shield by D. Jackson Leigh is the third and final book in the Dragon Horse War trilogy. This book focuses on the conclusion of the story and on Toni and Maya, who was introduced in the previous book. This review will contain some spoilers for the other books in the series but I’ll keep them vague.

At the end of last book, something happened which leaves some characters in a distressing situation. Thankfully, these characters all have powers and they balance each other, because the four of them need to work together while keep the extent of their gifts secret.

Maya, who is Kyle’s sister, is a pacifist who believes that warriors harm others and are suicidal and in her opinion, they have negative gifts. Toni at first isn’t much of a warrior. He likes to keep an organized inventory and she’s more of a shield that protects but Maya still sees her as a warrior. Maya has been attracted to boys and girls in the past, but she doesn’t like that she’s attracted to Toni, until Toni continues to proves herself. These developing feelings that the two characters have are developing in the presence of an empathy… that must have been interesting.

There is a lot of adventure, this being the last book in the series. In the beginning, there is a plane crash and its aftermath. I think that survival stories, foraging and engineering things to fit the situations are always interesting because in their remote possibility, they are realistic. There is also an epic fight at the end, whose parts from it have been foreshadowed by characters – I mean, one of the protagonists in this book is a Seer. There was also a cool twist with Laine. Mama bear to the rescue.

I liked the character development of some of the characters. Toni, who thanks to the situation and her powers and Michael thanks to his relationship and also his powers, have both evolved. Michael is an intersex character and I hope that more authors choose to include marginalized identities.

We also get to see the Network in action!

While the focus is on Toni and Maya, we get a variety of POVs in this book, among which, we have the villains too! We also have some past characters, some of which were a surprise. Something happened towards the end of the second book, which is resolved, with a great price in the last book.

A pet peeve of mine during this book was when Toni and Maya used terms of endearment towards each other. I get that they are supposed to be essentially soulmates, but they still barely know each other! There was also the famous trope of villains explaining all of their plans which makes it easier to stop them.

On the other hand, a super like in this book would be that experts are consulted when needed and that professions like farmers and geologists are regarded well. This however, isn’t done to the extent of the mangoverse series, which I adored. But hey, anyone that does justice to workers has a good place in my books.

Through the adventures of this series, the characters learn something. I liked that this was the case, rather than they go about as if they were 100% right in the first place. The epilogue shows where everyone is at. I personally thought that some characters and character dynamics were underused. I would have liked if there was more team bonding and relationships – after all these warriors have spent many lifetimes together but the primary focuses were the romantic relationships and the overall plot.

This book is great for those that like romance with a hint of fantasy and adventure. For those that prefer the latter, this series is good but there are better queer fantasy series that develop on the action and team dynamics.