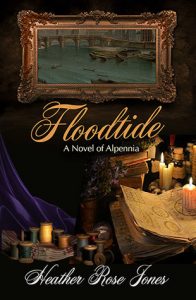 When I heard another book in Jones’ Alpennia Series was to come out this year, I was both excited and sad because I knew I would read it in a day or two and then the window into Alpennia would be closed again until the next in her series was released. I never dreamed I might love Floodtide more than the books that came before it. It can absolutely be read as a standalone, but some of my favorite players from the first three books make appearances and I think the experience is richer having read the others in the series as well. The timeline of Floodtide straddles part of the second and third books in the series, but from a whole new perspective. I can’t wait to go back and catch new details in those stories.

Floodtide is told in first person from Rozild “Roz” Pairmen’s point of view. A laundry maid when we first meet her, over the course of the story her role changes and evolves like water moving underfoot. I thought this was a story about Roz, but it’s actually about the city of Rotenek in the way The Wire is more about Baltimore than any of the named characters in that show. This is a testament of Jones’ storytelling abilities, to be able to weave such rich worldbuilding seamlessly around a gripping tale of a young woman bearing many secrets (some her own, some of others); having left the countryside for work, she is trying to find her place in a complex new city.

I often tell people Jones’ Alpennia Series isn’t really about romance but it is about love. She writes “found family” better than anyone I’ve read. I’m fascinated by our queer foremothers and these books have fleshed out one universe where people who love other people of the same gender not only survive but they thrive. More than that they look out for each other, and in Floodtide we find out the affinity for people like themselves, people different in notable ways, transcends race and class.

There is a line in the film Ocean’s Eight about women going unnoticed, and in Floodtide that adage is applicable to the serving class going unnoticed. I say this book is about Rotenek because Roz, being in service, can go places the high society protagonists of the earlier books in the series could never go. Roz and her merry band of friends – an unlikely bunch that includes: the daughter of the town’s dressmaker, her best friend Celeste; younger cousins of book one protagonists Barbara and Margerit, Brandal and Iulien respectively; the youngest palace prince and possible heir to the throne, Aukustin; and a riverboat woman, Liz – take the reader into the underbelly of Rotenek and flesh out the inner workings of the town. Oftentimes Roz is too young and/or too inexperienced at life to understand the trouble or danger she could be in, but that kept me on the edge of my seat and turning the page.

Even more than in the other books in the series, the fantastical elements of Alpennian society, always filling the cracks of Rotenek, are at the core of the story. There is a constant sense of adventure and hope, even when the characters are facing the bleakest of circumstances.

I can’t remember the last time I was moved to tears by a book, but Jones managed to make me full on sob with happiness, not once but twice!

This is simultaneously both a fantastic entry point to Jones’ Alpennia Series, and a wonderful compliment to the stories that came before it. As one of my favorite books of the year, I hope you’ll give it a try and fall in love with the goings on in Rotenek as much as I have.