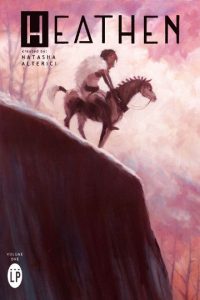 Natasha Alterici and Rachel Deering’s Heathen follows Aydis, a lesbian Viking maiden trying to smash the patriarchy through the medium of rescuing a Valkyrie from a curse. In theory this is exactly my thing! In practice, I’m conflicted.

The art style feels rough and scribbly, which works perfectly for the narrative and gives it a real sense of motion and urgency. And I am absolutely here for queer warriors and women supporting other women and threatening bigots. But I do think that the story could have been set in a second-world fantasy (perhaps a magical apocalypse!) and it would have made more sense. HEAR ME OUT, it’s not for the reason you think! I don’t find the lesbian Vikings unrealistic, I find the homophobia unrealistic. The way that characters react to queerness feels anachronistic, because it sounds more like modern-day conservative Christian bigotry than anything else, which is weird enough for a historical setting, and doubly so for a setting where Christianity is explicitly only just making inroads, and thus shouldn’t have the infrastructure and laws to enforce that bigotry. I know the rule is that claiming things aren’t historically accurate when there are talking horses and mermaids is silly, I’m just confused as to how Odin became the mouthpiece of Christian values.

… Also for a comic that specifically called out Vikings wearing horned helmets as an inaccuracy, putting most of the female characters into bikinis was an odd choice! There is an in-universe explanation for it, but as written it sounds like the character designs came first and the reason came later. The fact that the crew of the ship that Aydis ends up on do manage to have real clothes, although again, they’re a mix of styles and influences that I would have accepted without question in a second-world fantasy, but was slightly surprised by when side-by-side with someone in fur and a bikini. (By the way, there is a crew of POC sailors and I am very invested in their story.)

All of that said, I do like stories about queer women banding together to punch misogyny in the face, and the way it specifically adapted the mythology of Odin’s missing eye and Brynhild works very well! When it’s being funny or sincere, it commits completely, and the panelling and art style evoke mood perfectly! It’s just that the story’s roots feel disconnected from what it actually is.