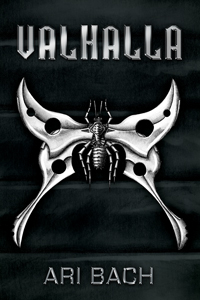 Violet MacRae is one of the aimless millions crowding northern Scotland. In the year 2330, where war is obsolete and only brilliant minds are valued, she emerges into adulthood with more brawn than brains and a propensity for violence. People dismiss her as a relic, but world peace is more fragile than they know.

In Valhalla, a clandestine base hidden in an icy ravine, Violet connects with a group of outcasts just like her. There, she learns the skills she needs to keep the world safe from genetically enhanced criminals and traitors who threaten the first friends she’s ever known. She also meets Wulfgar Kray, a genius gang leader who knows her better than she knows herself and who would conquer the world to capture her.

Branded from childhood as a useless barbarian, Violet is about to learn the world needs her exactly as she is.

This is a good blurb. It’s concise, engaging, and does hint at a lot of the madcap joy that can found in Ari Bach’s debut. And it still doesn’t explain a thing.

Of the million people in Kyle City, there was none so aimless as Violet McRae. And, out of the thousand-odd books I would have read or listened to over the past few years, none have made me laugh, roll my eyes, wince, shout out loud, or made me feel like my brain was leaking out my ears quite like this novel.

The cleverness of it—the enormity and insectity (yes, just go with it) and sneaky joy—caught me as soon as Violet—dishonorably discharged from a military career and certain of nothing except her own bleak future—found herself in the Hall of the Slain, training to bash heads and take names, taking to life the way Sean Connery took to Bond films. I watched her make friends and disconcert her enemies, and accept uncomfortable truths about herself. It was chilling. It was sweeping. It was often extremely funny. And I’d nearly given up on Valhalla in the first two chapters. Not because Violet was amoral—she is, in a way, but that’s not the point; the whole novel examines politeness and ‘acceptable’ emotional responses as a conceit, and it’s going to stick with me a while—but because the narrative style is downright peculiar. The closest parallel I can come up with is the ridiculously smug, omniscient narrator from Pushing Daisies, or Robin McKinley at her most stylised. The reader reads Violet, a lot like an extremely long, detailed report written by someone with a dubious sense of humour. We watch her parents die, as she does, and narrator-on-high dolefully informs us that Violet is aware that she should be expressing grief, but that she doesn’t need to. The overall effect is distancing: we are distanced from Violet just as she is (we are told!) from her emotions.

Strangely, this effect disperses as we enter Valhalla. The story is still narrated, but the affectation softens. My lit-crit brain reads this as: Violet came home, and so did the text, but that’s just my own reading. Whatever the reason, remainder of the book was a delight: including the best (and most brutal) training montages I have ever seen, heists and hijinks, true friends, and a fascinating take on revenge narrative that, like much of Valhalla when it turns philosophical, is going to lurk in the back of my mind for a while. The worldbuilding is a joy. The dialogue, so sparse early on, is heady and clever and does a remarkable job not tripping up on itself. There are, possibly, a few too many plot threads that turn up in the final third, but I’ll forgive it for the tikari, and the walruses, and the beautifully complex characterisation of Violet’s friends. I have to stop here, before I fangirl elements of this story to death.

Now, this is a Harmony Ink Press title and a review for the Lesbrary, so I’d me remiss not to mention that the relationship that slowly (slowly) burns between Violet and Vibike—a woman so clever that Violet initially mistook her for an AI program, and with her own need for revenge that, I think, was even more finely drawn than Violet’s—is gorgeous. It is not rushed, or forced, truly resolved in any way, but it adds a level of tension just where the novel needs, and—should the story be continued—I’d love to see where Vi and Vibs end up.

So. Yes. This book. Enjoyed lots. My brain basically short-circuited the moment I found out the Valhalla historian goes by Snorri, and I finished the rest of the novel in orgiastic Old Norse scholar glee, where I wished that Aud Torvingen might show up to take Violet out for a drink. The narrative style is, unquestionably, a style, and it won’t be for everyone. The end is rushed. But when it’s not making you laugh, it’ll make you think, and I am delighted that I kept going past chapter two.