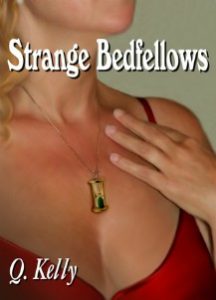 Much like Pretty Woman, the lesbian novel Strange Bedfellows by Q. Kelly concerns itself with the relationship between a high-powered executive and a prostitute. Frances Dourne is the poster child for the ex-gay movement in Washington, DC as the leader of the organization Gay Is A Choice. But despite her public success, her personal life has been deeply troubled. Her daughter Marissa was abducted by her father on the eve of her third birthday, and Frances hasn’t seen or heard from them since. Eleven long years after her family’s disappearance, Frances is finally motivated to come out of the closet by her nephew’s senseless death. She enlists the help of a call girl, Elena, who has a tragic story of her own: her son drowned in front of her three years ago, and she blames herself.Frances asks Elena to help her prepare for both her public coming-out and her confrontation with the parents who sent her to an abusive ex-gay camp when she was first questioning her sexuality. She is looking for support, not sex.

Meanwhile, Elena has been using her new job as a way to escape her feelings about her son’s death. Although there is initially a lot of caution between the women–they are, after all, engaged in a prostitute-client relationship–each has a need for support and understanding that leads them to break the rules together. Early in the book, Kelly leaves the developing relationship between Frances and Elena to focus on Victoria, a fourteen-year old girl with a reclusive father who is increasingly convinced that she is the missing Marissa Dourne. Over the course of the narrative, Frances and Elena grow closer to each other as the date for her public self-outing draws closer; meanwhile, Victoria toys with the idea of calling the Marissa hotline to confess what she feels must be the truth, especially as her father grows more unstable. Will Frances be reunited with her daughter? Will the fragile relationship that Frances and Elena have managed to forge, despite the odds, manage to survive the publicity firestorm that her coming out speech will inevitably bring?

I enjoyed the unexpected weightiness of this book. It was interesting to leave the romantic relationship to see things from the perspective of a fourteen-year old who was having her own issues with life. While the women both had issues in the past that had an impact on their behavior, they weren’t portrayed as something that would create a permanent obstacle between them if they were willing to be together. The action seemed to be set in a little bit of an alternate reality (in which King Albert X of England hired Elena and a few other call girls while he was in DC), but that wasn’t fleshed out enough to either be intriguing or especially intrusive.

One Reply to “Anna reviews Strange Bedfellows by Q. Kelly”